Home Entertainment Priyanka Chopra mourns demise of American dancer Stephen ‘tWitch’ Boss; says,
Priyanka Chopra mourned the demise of the American dancer Stephen ‘tWitch’ Boss. Taking to Instagram on Friday, Priyanka shared a picture on her stories with a captioned, “Still processing this. You gave so much to the world. You never know what someone is going through. Rest in peace and love tWitch. You truly were a light. My condolences to Allison Holker and the children.” 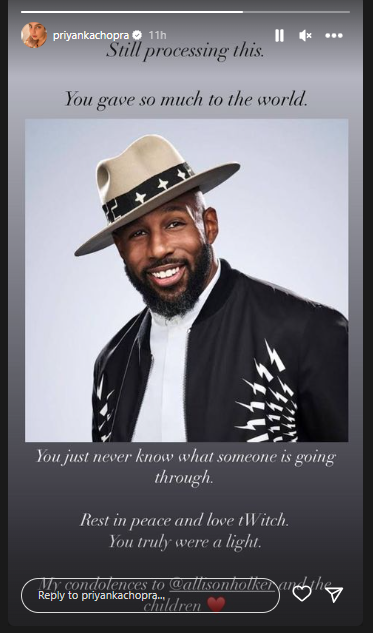 Stephen Boss, better known as ‘tWitch’ from the popular ‘The Ellen DeGeneres Show’ , died by suicide. Ellen DeGeneres too reacted to the tragic situation on Instagram as she shared a picture of herself hugging the hip-hop dancer and DJ.

“I’m heartbroken. tWitch was pure love and light. He was my family, and I loved him with all my heart. I will miss him. Please send your love and support to Allison and his beautiful children – Weslie, Maddox, and Zaia,” Ellen wrote.

Stephen rose to fame from the MTV’s ‘The Wade Robson Project’ and became a runner-up in ‘Star Search’. He also participated in the dance reality show, ‘So You Think You Can Dance’ in 2008. In 2014, he joined Ellen’s talk-show as a guest DJ, gradually becoming a permanent part of the show and becoming a co-executive producer in 2020, as per People.

On the work front, Priyanka will be seen in ‘It’s All Coming Back To Me’, and Russo Brothers’ sci-fi drama series ‘Citadel’ directed by Patrick Morgan and starring Richard Madden. She will also be a part of Farhan Akhtar’s Jee Le Zaraa alongside Alia Bhatt and Katrina Kaif.

News Next Desk - February 7, 2023 0
The Pittsburgh Maulers' full schedule for the 2023 USFL season was released Tuesday.The Maulers, coached by Ray Horton, open the season...
%d bloggers like this: