Home Sports ‘Potentially unsafe’ Gabba pitch under scrutiny – ‘Is that a good advertisement... 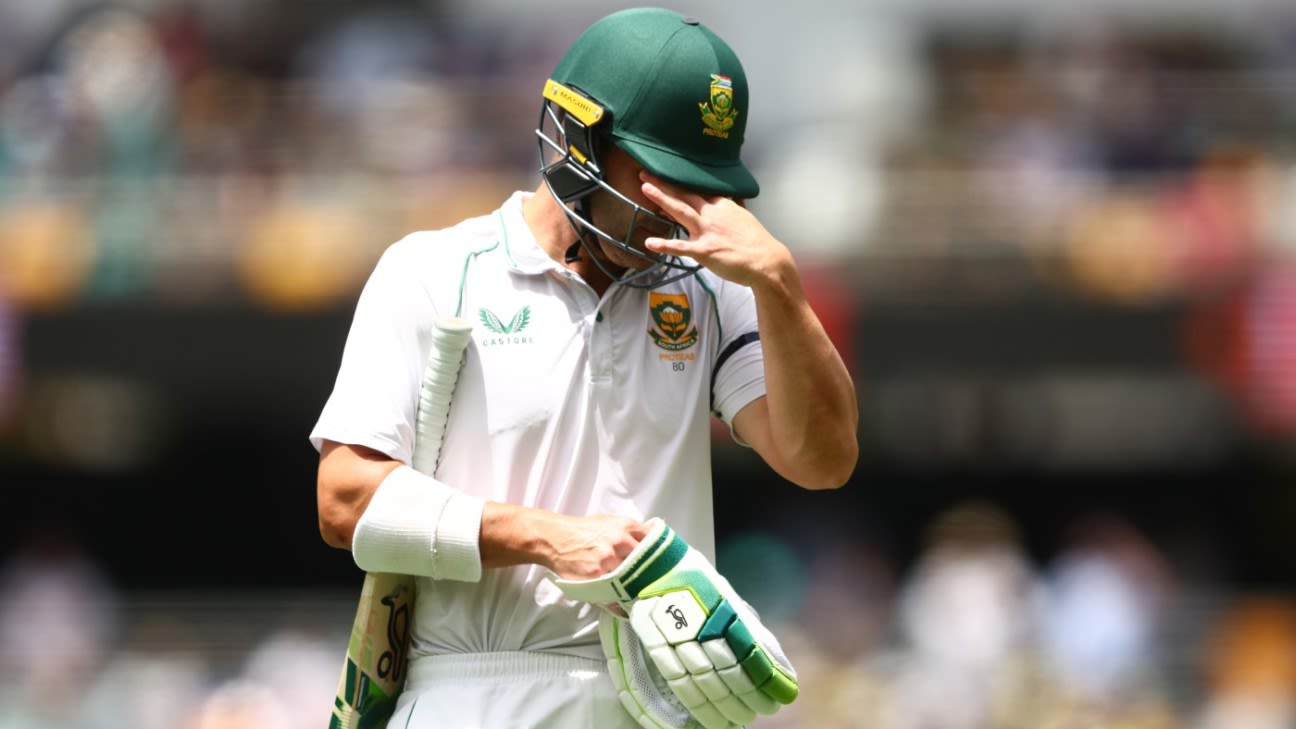 The Gabba pitch could come under scrutiny after producing the second shortest Test match in Australia. South Africa captain Dean Elgar revealed he had approached the umpires in the closing stages to question when conditions would be deemed to have become dangerous although Pat Cummins had no qualms about the surface.

“I did ask the umpires when KG [Rabada] got [Travis] Head out down leg, I said ‘how long does it go on for until it potentially is unsafe?’,” Elgar said. “And then [Anrich] Nortje was bowling those short ones that were flying over our heads. I know the game is dead and buried, it was never to try and change or put a halt to the game. That’s where the umpire’s discretion comes into play, not us as players. I am definitely not going to say it was safe or unsafe.”

Elgar added he didn’t get a response from the officials. “There were only a handful of runs left so I thought maybe they thought I was just trying to take the mickey,” he said. “But it’s not a bad reference point going forward to get a reply.”

Cummins’ view was the pitch had not come anywhere close to dangerous. “No way, it was fine,” he said. “Sideways movement, there was a little bit of up and down bounce, but it was fine. There were no balls jumping off a length or anything like that.

“It was certainly tricky. Two days probably isn’t ideal…personally, I don’t mind it if the groundsman err on the greener side occasionally, [I’ve] played a lot of Tests where they’ve erred on the flatter side. Think it was the same for both teams.”

Two strong bowling attacks exploited a surface offering considerable movement and some uneven bounce to produce just the second two-day finish in Australia. The only Test in the country to end with fewer deliveries involved was also between Australia and South Africa, at Melbourne in 1931-32, which is also the shortest Test of all time and involved the visitors being bowled out for 36 and 45.

In 2022, the totals were somewhat less dramatic, although South Africa only got as far as 99 because of a last-wicket stand of 30 between Khaya Zondo and Lungi Ngidi. As Australia chased 34 for victory they lost four wickets to Kagiso Rabada and 15 of the runs came from wide bouncers that sailed over the keeper.

“You’ve got to ask yourself the question – is that a good advertisement for our format? Thirty four wickets in two days – a pretty one-sided affair, I would say,” Elgar said. “The nature of it, how it started to play with some seriously steep bounce with the old ball, you are kind of on a hiding to none as a batting unit. I don’t think it was a very good Test wicket, no.”

Pat Cummins’ view was the pitch had not come anywhere close to dangerous: “There were no balls jumping off a length or anything like that”•Getty Images

It is not unusual for Sheffield Shield pitches to start green at the Gabba – and they usual flatten out during the first couple of days – but the concerning element during the second day was the signs of uneven bounce which crept in as divots which formed on the opening day started to harden. Alex Carey and Temba Bavuma were both struck on the elbow while Bavuma was then trapped lbw by one which kept low from Nathan Lyon.

“It was interesting to see how quickly this one actually did start divoting and how quickly the ball sped up, especially the new ball,” Elgar said. “And also today the older ball was flying through which shouldn’t be really happening. The divots had quite a big role to play with the sideways movement and up and down and that steep bounce which is quite something to face

The view from some Australian players and others who had seen a lot of cricket at this ground was the pitch, although having the same 5mm of grass as last year’s Ashes, was the toughest they had encountered.

The ICC’s pitch monitoring process rates a surface in one of six categories, although the lowest – unfit – is only for extreme occasions. The ‘below average’ and ‘poor’ ratings both bring one and three demerit points respectively and if a ground earns five over a five-year period, it can be suspended from hosting international cricket.

The section under the poor rating reads: “If any of the following criteria apply, a pitch may be rated “poor”:
The most recent pitch to be handed demerit points was the Rawalpindi surface produced for the opening Test against England which was deemed “below average” after a run-laden encounter, although Ben Stokes’ team secured a remarkable victory.

Andrew McGlashan is a deputy editor at ESPNcricinfo