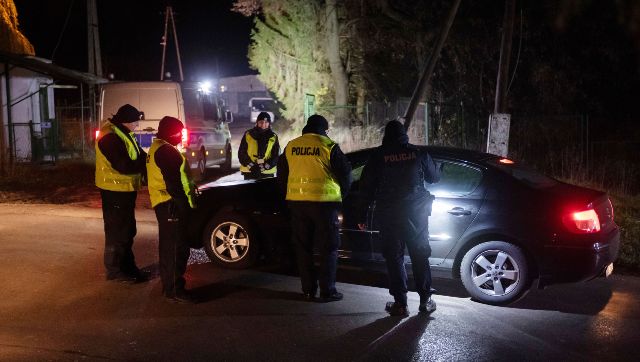 Police officers gather outside a grain depot in Przewodow, eastern Poland, on Tuesday where the Polish Foreign Ministry said that a Russian-made missile fell and killed two people. AP

Two people were killed in an explosion caused by the missile in Przewodow, a village in eastern Poland about 6 kilometers (3-1/2 miles) from the border with Ukraine, Polish authorities said.

President Joe Biden earlier on Wednesday said it was “unlikely” that a missile that killed two in NATO-ally Poland was fired from Russia, but he pledged support for Poland’s investigation into what it had called a “Russian-made” missile.

Biden spoke after he convened an “emergency” meeting of the Group of Seven and NATO leaders in Indonesia Wednesday morning for consultations on the attack that killed two people in the eastern part of Poland near the Ukraine border.

“There is preliminary information that contests that,” Biden told reporters when asked if the missile had been fired from Russia. “It is unlikely in the lines of the trajectory that it was fired from Russia, but we’ll see.”

Biden also spoke by phone with his Polish counterpart Andrzej Duda, offering “full US support for and assistance with Poland’s investigation”, the White House said.

The two leaders agreed to “remain in close touch to determine appropriate next steps as the investigation proceeds”, it added.

Poland is protected by NATO’s commitment to collective defence – enshrined in Article 5 of its founding treaty – but the alliance’s response will likely be heavily influenced by whether the incident was accidental or intentional.

Biden also spoke with NATO chief Jens Stoltenberg about the blast in Poland, while ambassadors from the alliance were to hold an emergency meeting on Wednesday.

The incident drew widespread condemnation, with European Union chief Charles Michel saying he was “shocked” and French President Emmanuel Macron calling for talks at the G20 summit underway in Indonesia.

Ukraine’s Foreign Minister Dmytro Kuleba rejected as a “conspiracy theory” the idea that the Poland blast may have been caused by a surface-to-air missiles fired by Kyiv’s forces, while Russia’s defence ministry dismissed reports that it was to blame as a “provocation” intended to escalate tensions.

News Next Desk - December 5, 2022 0
Veteran actor Bob McGrath, the original cast member of Sesame Street, passed away at age 90. Bob's death was confirmed by his family members via...

What was the Wirecard scandal? Know how the $25 billion blue-chip...

News Next Desk - December 5, 2022 0
German digital payments company Wirecard is back in the spotlight. More than two years after its collapse, the company’s CEO Markus Braun and two...

News Next Desk - December 5, 2022 0
Greg Auman NFC South Reporter The Buccaneers are trying to get their offense back on track, but their next chance...

News Next Desk - December 5, 2022 0
Fortnite Chapter 4 has finally landed, and outside of an entirely new map, some intense visual upgrades have arrived. Now powered by Unreal Engine...

News Next Desk - December 5, 2022 0
The Supreme Court on Monday said it will organise its first 'hackathon' event to identify innovative ideas and explore practical propositions for refining and...
%d bloggers like this: