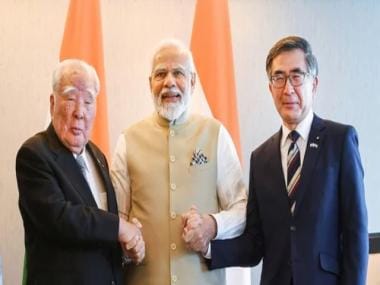 The Prime Minister’s meetings provided the opportunity for a political assurance that India was not only open to business, but ready to listen to Japanese businessmen, facilitate their work and welcome their added investments.

Prime Minister Narendra Modi’s visit to Tokyo for the Quad summit shows how effective management of time can lead to positive results. The visit was mainly for the in-person Quad summit. There was also an opportunity for bilateral meetings with the principals of the other Quad countries.

This provided PM Modi the opportunity to meet his host, PM Fumio Kishida who had been to India in March for the 14th India-Japan annual Summit. It was also the occasion to meet with US President Biden in person for the first time since the Ukraine crisis. The two leaders have held virtual conversations on a few occasions.

It was an occasion for the Quad leaders to meet with the new Australian Prime Minister Anthony Albanese who had just unseated Scott Morrison’s party. Morrison was a staunch supporter of Quad and AUKUS. There would be consternation about whether the Australian Labour Party now in power would continue to abide by the same line of thinking. Albanese in his opening remarks at the Summit assuaged that.

Bilateral meetings are the clear by-product of a plurilateral meeting like the Quad. For the additional time that PM Modi was in Tokyo on 23 May, he utilised it as if he was on a bilateral visit to Japan. It may be recalled that his last in-person visit to Japan was in October 2018 for the 13th annual summit. Between 2018 and 2022, the annual summits were virtual and PM Modi had no occasion to visit Japan. Therefore, to make up for a lost time, it was wisely decided to meet with Japanese businessmen and entrepreneurs as well as the Indian diaspora.

During PM Kishida’s visit to India in March, he had announced that the target of Japanese FDI now was yen 5 trillion in the next five years. Essentially, this averages out to an anticipated FDI of about $2 billion per annum from Japan. This is a large volume and continuing reforms in India and engagement with Japanese companies will help in fulfilling these targets.

A review of the list of 34 companies from Japan that met with PM Modi shows that many of them are already in India, and well settled. They are the ones who are now likely to expand their footprint which will contribute to this larger augmentation of Japanese FDI. They have had better experiences in India. The meeting that the PM had with the Advisor to Suzuki Motor Corporation, Osamu Suzuki, was telling. He is the original big investor in India. Now he is quite old and moved into an advisory position. The fact that he called on the PM shows a vote of confidence. Maruti Suzuki in fact is one of the largest expanding investors in India, moving beyond automobiles into related sectors including EVs.

The PM’s meetings provided the opportunity for a political assurance that India was not only open to business but ready to listen to Japanese businessmen, facilitate their work and welcome their added investments.

Similar was the meeting with the diaspora. Since 2018, the Indian diaspora in Tokyo has not had an occasion to meet the PM. It was important that the PM took out the time to meet with them and convey to them the changes in India and what role he expected from this expanding Indian diaspora in Japan. Much like what he said to the diaspora in Copenhagen, so in Tokyo, he expects the diaspora to contribute to nation-building, to a better understanding of India among their host countries, and to increase host country tourism and exchanges with India.

The Indian diaspora in Japan mainly works for Japanese or international companies. They are embedded into their host systems and in a better position to present the Indian point of view, culturally and economically. This makes a very big difference. Many Japanese companies have adopted the model of US companies by sending their Indian employees living in Japan or even in their overseas offices to guide their operations in India. This is where the Indian diaspora can continue to play a major role.

Where the perspectives are concerned the Quad summit came on the heels of another shock in the world. The previous Quad summit took place following the Covid-19 crisis which was a natural disaster. The Quad stepped up to cooperate and help the partners as well as the Indo-Pacific countries in several ways.

This time, the shock of the Ukraine crisis and the sanctions imposed by the US and its allies on Russia are the major challenges. The world economy had not recovered from the Covid crisis. Now additional shocks are piled up upon it. Though the Quad summit did not assign blame for it, there was no unanimity on whether Russia alone was to blame for all the ills that were striking the globe right now.

In India’s view, China remains the main threat. The Quad summit served to refocus attention on the Indo-Pacific and the role of China. India continues to have China unrelenting in resolving the border issue or reducing force levels even after agreements. The Taiwan issue is now reaching crisis levels; the US is strongly nudging Japan to do more in case of an emergency and itself looking at how Taiwan can be protected in case of a Chinese assault. Japan is facing more frequent incursions by Chinese ships into the Senkaku Islands. Chinese and Russian ships are now exercising more frequently between Honshu and Hokkaido Island in Japan. A Chinese aircraft carrier has moved closer to Okinawa and exercises there. Chinese threats to Japan are increasing.

Where Australia is concerned, it would like to have China ease the sanctions imposed on it and have streamlined exports to attain pre-Covid levels. This may not happen in a hurry but meanwhile, the Solomon Islands in Australia’s zone of influence, have more or less signed off to be a Chinese ally and allow Chinese military access and activity. They are also preventing access by others. Other South Pacific countries may be similarly infected.

Australia needs to enhance its influence and act more decisively to persuade its friends in the South Pacific that China is not a trustworthy ally.

Thus, all the Quad partners have clear problems with China. While the question is often raised that it is the new government in Australia whose commitment to challenge China may be in doubt, it is often the United States whose intention remains in doubt. The United States has wilfully undertaken to paint Russia as the world’s enemy number one, reducing attention on China. Their efforts to wean China away from Russia include certain concessions; the tariff barriers that Trump had raised with China, the Biden administration has slowly restored. The confrontational position of the United States with China is more circumspect than before. Quad partners will assess whether the Americans can be a trusted ally against China. They seem to be more interested in defending Taiwan rather than the Indo-Pacific.

The Americans tried to show that they were serious about the Indo-Pacific by announcing the Indo Pacific Economic Framework (IPEF)consultations, which they called a partnership for prosperity. The US brought the IPEF to the attention of all interlocutors but left Japan to flesh it out. Wisely, instead of rushing through a system of accession to the IPEF, and asking countries to join straight away, without being clear on what they were entering, they are now consulting.

What is announced is a framework for discussions and consultations that will ensue. Due to this, it has become easier for India to say yes. India agreed to be consulted, rather than sign up to IPEF, parts of which we’re certainly uncomfortable with.

The IPEF, interestingly, is like a large RCEP without China, Cambodia, Laos and Myanmar, but with the addition of the United States and India. However, it is not a trade pact and does not offer trade access to the US market. It is essentially a TPP-like instrument trying to raise the standards and quality and security of critical technologies.

Its framework overlaps in some ways with the Quad preferences, which broadly cover climate, critical technologies, semiconductors, quality infrastructure and dealing with Covid. There are a host of others including hydrogen for green shipping, cybersecurity, and the like. Many of these core ideas may resonate in the IPEF. It remains to be seen how many of these can be brought into focus and proceed to clear commitments.

The writer is a former Ambassador to ASEAN. Views expressed are personal.

News Next Desk - September 30, 2022 0
New Delhi: Mallikarjun Kharge, the leader of the opposition in the Rajya Sabha, submitted his nomination on Friday at the headquarters of the All India...
%d bloggers like this: