“This year, we have also witnessed the war in Ukraine further adversely impact the global economy. There was a discussion on the issue. We reiterated our national positions as expressed in other fora, including the UN Security Council and the UN General Assembly which,… deplores in the strongest terms the aggression by the Russian Federation against Ukraine and demands its complete and unconditional withdrawal from the territory of Ukraine,” the G20 Bali Leaders’ Declaration read.

‘Today’s era must not be of war’

PM Modi’s statement to Russian President Putin in Samarkand on the sidelines of the SCO summit on 16 September – “today’s era isn’t of war” was reiterated at the G20 summit in Bali. The leaders condemned threat of nuclear weapon use.

The G20 declaration said that it is essential to uphold international law and the multilateral system that safeguards peace and stability. 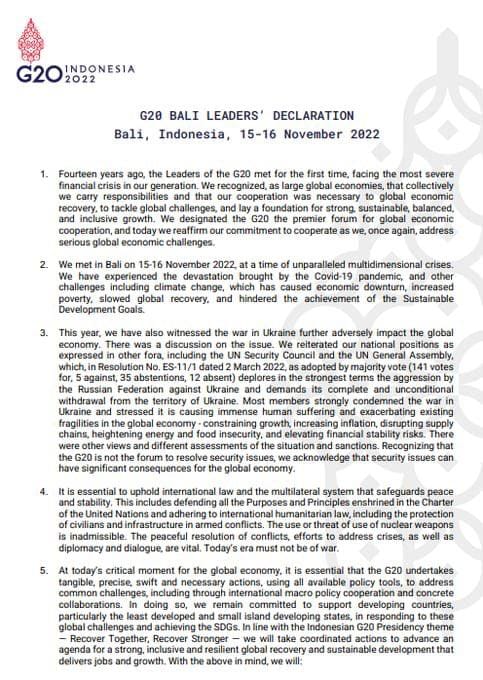 “The use or threat of use of nuclear weapons is inadmissible. The peaceful resolution of conflicts, efforts to address crises, as well as diplomacy and dialogue, are vital. Today’s era must not be for war.” the declaration stated.

The communique has been signed by G20 leaders on Wednesday, after the two-day summit ended.

The two-day Bali G20 Summit ended today with the president of Indonesia Joko Widodo handing over leadership to India.

When will India assume G20 Presidency?

PM Modi said, “It’s a matter of pride for every Indian as India takes over the presidency of the G20. We will organise G20 meetings in different states and cities in India. Together we will make G20 a catalyst for global change.”

“We have to keep women-led development a priority in the G20 agenda,” the Prime Minister said.

He further said that India’s G20 presidency will be “inclusive, ambitious, decisive and action-oriented”. The PM added, “In the next one year, it will be our endeavour that G20 works as a global prime mover to give impetus to collective action.”

‘Terrifying’: People react to Indonesia’s ban on sex outside marriage

Alia Bhatt takes a break from ‘mommy duties’, gets papped after her yoga session –

SCoRe’s PG Diploma Programme Begins in February 2023 at their Mumbai...

News Next Desk - December 7, 2022 0
School of Communications and REputation (SCoRe) is accepting applications for 10 months PG Diploma in Public Relations and Corporate Communications programme for its Class...

News Next Desk - December 7, 2022 0
Lizzo looked truly magnificent as she walked up the stage of 2022 People’s Choice Awards and received the biggest nod of the night –...

Mumbai Civic Body Will Be Held Responsible In Case Of Any...

News Next Desk - December 7, 2022 0
Mumbai: The Bombay High Court on Wednesday said while it appreciates the work being done by the city's civic body to cover open manholes,...

Alia Bhatt takes a break from ‘mommy duties’, gets papped after...

News Next Desk - December 7, 2022 0
Alia Bhatt and Ranbir Kapoor became parents to a beautiful baby girl on November 6. While it's just been a month to the delivery,...
%d bloggers like this: