UK PM Boris Johnson said he would appreciate if the tariffs are dropped by India on certain goods and commodities and in return, Britain too would drop some tariffs it levies 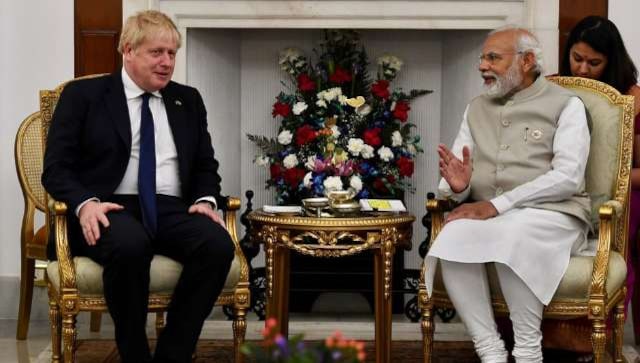 Prime Minister Narendra Modi on Friday held talks with UK PM Boris Johnson at Hyderabad House in New Delhi. After the meeting, both the leaders addressed an India-UK joint press conference in which PM Modi said he with his British counterpart have decided to work towards concluding the FTA by end of this year.

“We have discussed in detail our strategic and defence partnership. We also spoke about a free trade agreement (FTA) between the two nations. This will be ready by the year-end. In the last few months, India has started FTA with the UAE and Australia. We want to do the same with the UK in the same pace and equal commitment,” PM Modi said.

PM Narendra Modi also welcomed the United Kingdom’s “keenness on manufacturing in India”, especially in the defence sector, and in making ‘Atmanirbhar Bharat’ a success. He also invited the UK to join India’s National Hydrogen Mission.

During the meeting, PM Modi and Boris Johnson discussed and reviewed the progress made in the roadmap 2030 of a comprehensive strategic partnership launched by India and the United Kingdom last year. Both the leaders also decided future goals regarding it.

“Implementation of Global Innovation Partnership between India and UK will be a big achievement,” PM Modi said. The leaders also discussed ways to enhance bilateral cooperation between the two countries.

Prime Minister Narendra Modi said, “India and UK will co-develop a $100 million initiative to battle the issue of climate-change by funding tech firms and start-ups.”

Both the Prime Ministers also expressed their commitment to fulfilling promises made during the last COP 26. “We stressed on a free, open, inclusive and rules-based Indo-Pacific region,” PM Modi said.

During the meeting, the leaders also discussed the ongoing reforms in India, infrastructure modernisation plan and National Infrastructure Pipeline.

PM Modi said, “We have focused on dialogue between the nations in the Russia-Ukraine war and have always maintained that the sovereignty and integrity of both nations be maintained. We also reiterated our appeal for a democratic and inclusive government in Afghanistan.”

Talking to media, Boris Johnson said that Britain aims to have a new free trade agreement by Diwali. “I have urged officials to get it done by Diwali. We appreciate the tariffs being dropped by India on certain goods and commodities and in return, we too are dropping some tariffs we levy,” he added.

Johnson said that the UK works with India to ensure a free and open Indo-Pacific region and both the nation share a common vision for that.

He also thanked his “khaas dost (special friend)” Prime Minister Narendra Modi and the people of India for the grand welcome. “I felt like Sachin Tendulkar upon my arrival and also like Amitabh Bachchan when I saw hoardings everywhere,” Johnson said.