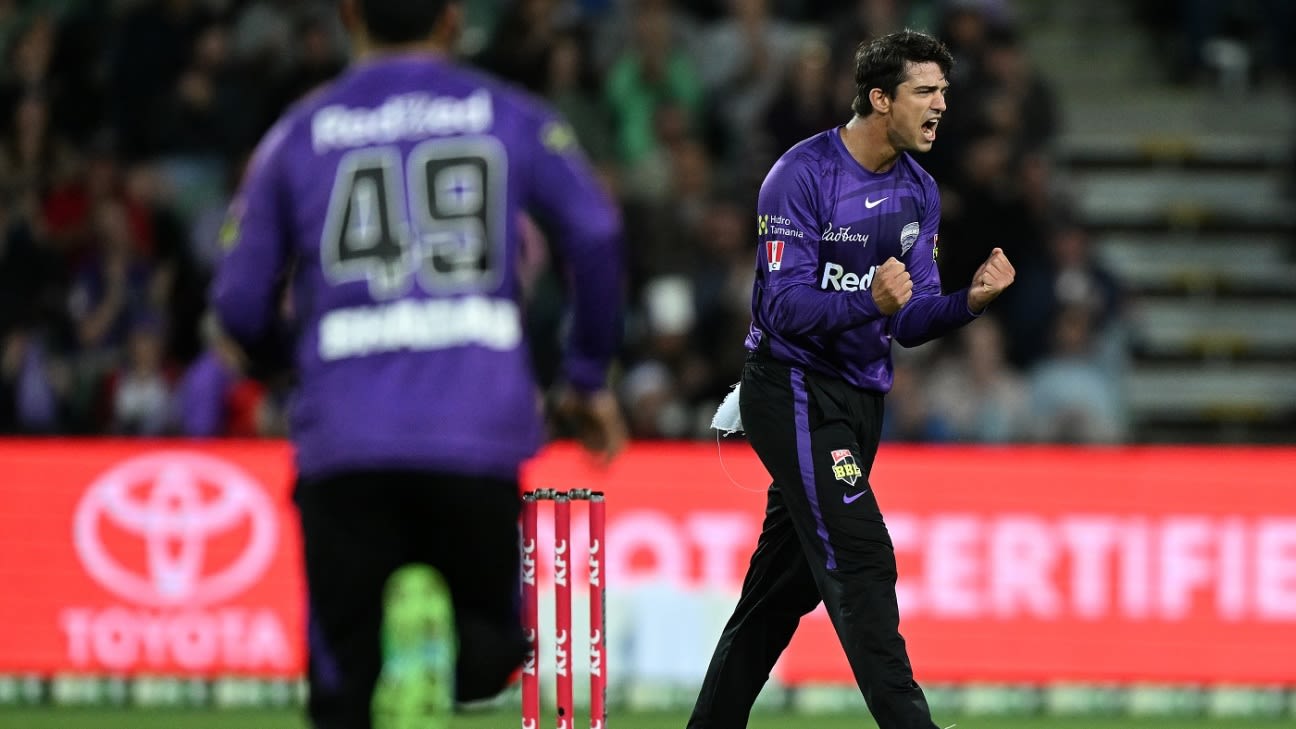 He didn’t claim a wicket in that game but bowled tidily and obviously made an impression on Hurricanes’ hierarchy, who were happy to snap him up.

After an encouraging season debut against Stars, where he clean bowled Marcus Stoinis for his first BBL wicket, Dooley was brought into the attack in the fourth over amid an onslaught from star recruit Faf du Plessis.

But the 25-year-old bowled accurately to frustrate du Plessis, who on the last ball of the over was bowled after backing away attempting a slash.

Dooley wasn’t done as he trapped Nick Hobson lbw then came back in the 16th over to pick up the key wicket of Josh Inglis and Ashton Agar to flip the game on its head.

He finished with 4 for 16 from four overs with his bowling marked by canny variations, unnerving accuracy and occasional sharp turn.

His much discussed unorthodox action, described by commentators as the bowling equivalent of a windmill, has already made him particularly eye-catching.

“I’ve always had the grip,” he said while collecting his Man-of-the-Match award, “And flicked them out but probably four years ago when India were over for the summer of cricket, I was just in the back yard on Christmas Day practicing some Jasprit Bumrahs. It kind of worked for my rhythm so I just went with it and it goes all right now. If it distracts the batters when they first see me, it’s an added bonus.”

Inglis issues a reminder
For Scorchers to defend their title, Inglis is probably going to need a big season. Amid a new-look batting order, the wicketkeeper-batter looms as their talisman due to his likely availability throughout the season.

His flexibility is particularly invaluable with Inglis able to shuffle around the order but has been backed in at No. 4 to start the season having mostly opened previously.

With Scorchers in a hole at 3 for 51, Inglis steadied the ship through trademark aggression and inventiveness as he scored all around the wicket. The 27-year-old smashed 62 off 37 balls but couldn’t get Scorchers home.

After Ben McDermott fell first ball of the innings, Wade counterattacked superbly to rattle Scorchers’ quicks by shuffling around the crease and using his feet.

Wade then effectively unleashed the reverse sweep to curb left-arm spinner Agar as he reached his half-century with a six. But Hurricanes collapsed mid-innings to lose 6 for 26 as they let slip of Wade’s strong platform.

David, however, remained at the crease and powered Hurricanes to a competitive total. With his side in trouble, David smartly played himself in before launching at the death to prove why he’s become one of the best finishers in the world.

Hurricanes’ new-look leadership team of coach Jeff Vaughan and Ricky Ponting, head of strategy, will be pleased with David’s elevation to No. 5 having been held back last season.
Richardson’s strong start to the season continues
After his remarkable 4 for 9 against Sydney Sixers in his return from a heel injury, Jhye Richardson eyed another big haul after conjuring steep bounce with the new ball to evoke images of the much-discussed Gabba surface.

But this pitch in Launceston soon flattened and Scorchers’ quicks copped a hammering as skipper Ashton Turner turned to spin after the powerplay.

Following the blueprint from last year’s triumph, Scorchers picked legspinner Peter Hatzoglou alongside Agar with the pair particularly effective on the slower pitches of the country’s east coast.

But Hatzoglou, who has shelved his day job in risk management consultancy as he embarks on a freelance T20 career, was thrashed for 13 runs in his sole over as Turner reverted to his trump card when Hurricanes took the power surge.

Richardson repaid the faith by dismissing Shadab and Jimmy Neesham in a game-changing 13th over. The 26-year-old’s canny mix of slower and quicker full-pitched deliveries completely bamboozled Hurricanes.

Keen to get back into national calculations, Richardson has issued a timely reminder with seven wickets in his first two BBL games.

Tristan Lavalette is a journalist based in Perth