In recent months the northern districts of Pakistan’s Khyber Pakhtunkhwa have witnessed a rise in suicide attacks, despite the government’s ceasefire agreement with the TTP. A total of 105 army personnel were killed in such attacks within the first three months of this year 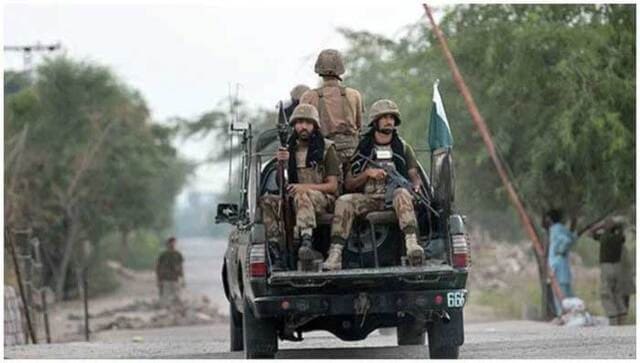 New Delhi: At least four soldiers were killed and seven others were injured in a suicide attack in the Mir Ali area of North Waziristan district in Pakistan’s Khyber Pakhtunkhwa province on Tuesday. The incident follows a series of similar attacks in the recent months.

Reports suggest a tri-wheeler rickshaw hit a military convoy near Pattasi check post in the Mir Ali tehsil region of the district, killing at least four soldiers and injuring seven, including two civilians, the Inter-Services Public Relations Pakistan (ISPR) said. The seven injured included three sepoys, two naik-rank troops, and two civilians, according to a statement issued by the ISPR.

The statement further said, intelligence agencies have commenced investigations to find out details about the suicide bomber who carried out the attack and his handlers and facilitators.

The “Pakistan Army is determined to eliminate the menace of terrorism and such sacrifices of our brave soldiers will not go unpunished,” the ISPR said.

Both President Arif Alvi and Prime Minister Shehbaz Sharif have expressed their grief over the suicide attack. The latter reiterated the nation’s firm resolve to root out the menace of terrorism. Sharif tweeted: “The whole nation including me is saddened and saddened by the martyrdom of 4 soldiers in a suicide attack in Mir Ali, North Waziristan. We pray to Allah Almighty to accept the sacrifices of these martyrs for the defense and peace of the country and grant patience to their survivors. The martyrs are the crown of our heads.”

The office of the president tweeted: “President Dr. Arif Alvi has condemned the suicide attack on the convoy of Pakistan Army in North Waziristan and expressed his heartfelt sorrow and regret over the martyrdom of four brave soldiers of Pakistan Army.”

Recently an uptick has been observed in the attacks on security forces by militants in the tribal districts despite the ceasefire declared by the Tehreek-Taliban Pakistan till the two sides reach an agreement to end the nearly two decades of militancy in the tribal region, bordering Afghanistan.

Several attacks like this have been reported in the area in recent months. Only a month ago 10 security personnel were injured in a similar attack. Before that, on 30 May another military convoy was attacked.

The porous border area between Afghanistan and Pakistan has been a stronghold for the Pakistani Taliban, a banned terrorist group in Pakistan, for decades. The group carries out attacks in Pakistan and retreats to its shelter in neighbouring Afghanistan.

Earlier, a total of 105 army personnel lost their lives in such terrorist attacks within the first three months of this year, including 97 soldiers and army officers, according to Pakistan Regional Media.

With input from agencies