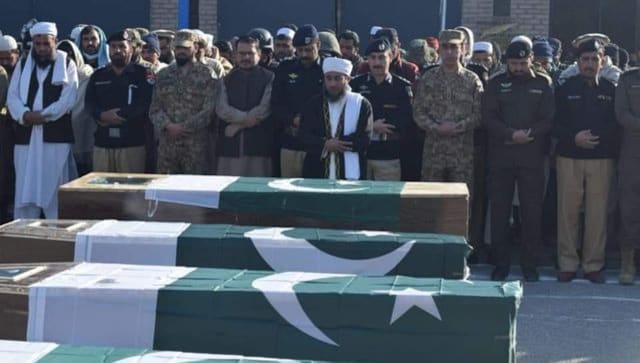 Stills from the funeral of dead policemen. Source: Twitter

Lakki Police spokesperson Shahid Hameed told media that the militants attacked the police station and tried to enter the building at the time when more than 60 policemen were on duty at that time.

He said that the policemen engaged the militants for almost 45 minutes after which the attackers escaped, taking advantage of the darkness.

Hameed pointed out that the police station is situated in a far-flung area and takes almost one-and-a-half hours to reach from Lakki city.

While no group has taken responsibility for the attack, the police suspect the banned Tehreek-i-Taliban Pakistan (TTP) as the group is known to operate in the area.

Funerals for the slain policemen were held at the Lakki police line on Sunday morning, which were attended by Regional Police Officer Bannu Syed Ashfaq Anwar, District Police Officer Ziauddin and senior military and civil
officials.

KP Chief Minister Mahmood Khan condemned the attack and offered his condolences while wishing the injured a speedy recovery, according to a press handout.

He also asked the Inspector General Police for a report on the incident and directed that the injured police officials be provided with the best medical aid.

Highlighting that the “increase in terrorism incidents in KP was concerning”, he demanded strict measures to be taken to suppress terrorists.

The TTP called off its ceasefire agreement with the government on Nov 28, ordering its militants to stage attacks across the country, according to a statement from the outfit.

The statement said that the TTP’s decision was taken after “a series of non-stop attacks were launched by the military organisations in Bannu’s Lakki Marwat district”.

Early this month, the Nacta told a Senate panel that the peace talks with the proscribed outfit “emboldened” it and allowed it to regroup.