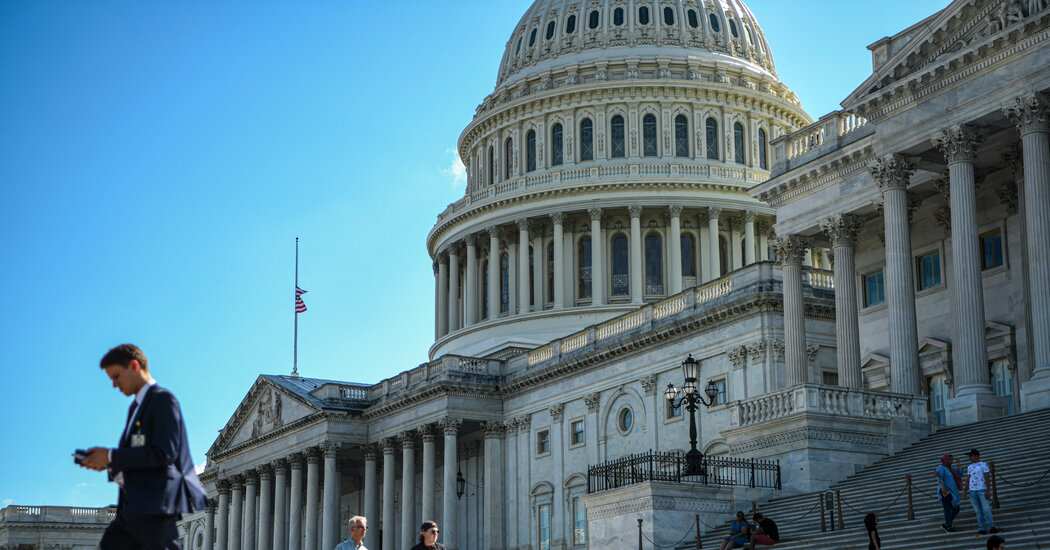 The climate provisions in the bill that the Senate passed this weekend are likely to be more consequential than anything else in the bill. They will lead to a sharp reduction in U.S. greenhouse gas emissions, experts say, and help address arguably the world’s most pressing crisis.

But the other main spending portion of the bill — dealing with health care — is significant in its own right, and it has received much less attention. (I virtually ignored the health provisions in a newsletter last week. And take a look, below, at yesterday’s print front page of The Times.)

Today, I want to walk through both the substance of the health care provisions and the politics of them. As my colleagues Sheryl Gay Stolberg and Rebecca Robbins have written, those provisions appear to be the most substantial changes to health policy since the passage of Obamacare in 2010.

They are all but certain to become law, too. In coming days, the House Democrats are expected to pass the same bill that the Senate did, and President Biden has made clear he will quickly sign it.

The bill sets out to reduce Americans’ medical costs in two main ways. First, it uses federal subsidies to reduce the cost of both health insurance and prescription drugs. Second, the bill gives Medicare officials the power to negotiate with pharmaceutical companies, which will likely reduce the price that the companies charge for those drugs.

For these reasons, the bill is effectively an effort to use the health care system to reduce economic inequality, much as Obamacare was. The bill’s benefits will flow overwhelmingly to poor, working-class and middle-class families. Its costs will be borne by increases in corporate taxes (which ultimately fall on shareholders, who skew wealthy) and reductions in the profits of pharmaceutical companies.

Some critics of the bill have argued that these profit reductions will lead pharmaceutical companies to spend less money developing future drugs and, in turn, to fewer promising treatments. And that’s a plausible concern. Economic incentives matter.

But most experts believe that the pharmaceutical industry will remain plenty profitable after the changes. The Congressional Budget Office — a nonpartisan body — estimates that the law will reduce the number of new drugs introduced over the next 30 years by about 1 percent. “It doesn’t seem that big a deal,” Juliette Cubanski of the Kaiser Family Foundation told me.

Here are the bill’s main provisions:

The political effects of the bill seem less clear.

I’ve written before about the work of Suzanne Mettler, a political scientist who has pointed out that many forms of modern government remain “submerged”: Americans often do not realize when a federal policy is helping them, because the benefits come through tax credits or other shrouded forms. Modern government tends to be more technocratic and complex than, say, Social Security.

It’s easy to imagine how these health care provisions might fit the pattern. Some of the benefits will flow through private insurance plans that people may not associate with a government program, Cubanski notes. Other provisions won’t take effect for a few years. Still others will spare people from facing a large medical bill, but they may not be aware that they wouldn’t have faced such a bill if Congress had not passed a new law.

“These are meaningful changes,” Cubanski said, “but most people may not necessarily notice that things are changing for the better.”

All of which suggests that the law’s proponents will still have work to do after the House passes it and Biden signs it. “It’s always important for supporters of a policy to explain how it will benefit people,” said Sarah Lueck, a health care expert at the Center on Budget and Policy Priorities. “And that’s really hard work.”

Summer: What makes Coney Island special? The Times asked children on the boardwalk.

Check, please: Your dinner tabs have soared. This is why.

Legends: Two basketball greats are retiring. Only one is a household name.

A Times classic: Does mixing alcohol really make you sick?

Lives Lived: Issey Miyake, the Japanese fashion designer, was famous for his innovative, origami-like designs and cult perfumes. He died at 84.

SPORTS NEWS FROM THE ATHLETIC

An ultimatum for the ages: N.B.A. superstar Kevin Durant and the Brooklyn Nets could be headed for a standoff after the forward asked Nets owner Joe Tsai to either trade him, or fire coach Steve Nash and general manager Sean Marks. When did the mercurial star turn on the team’s plans, anyway? Something isn’t adding up.

College football voting shenanigans: It was mostly business as usual in the college football preseason coaches poll. A suspicious first-place vote for Texas, however, is the stuff of sports radio hosts’ dreams. We have the most overrated and underrated teams. Bulletin board material!

The Yankees come up for air: New York lost five straight games before last night’s victory over the Seattle Mariners, but it sure felt like more. Aaron Judge hit his 44th home run of the season, putting him on pace for 65 this year.

To many Americans, the phrase “Mexican pizza” conjures up the Taco Bell menu item — tostadas stacked and shellacked with meat, bean and cheese. But Latino-owned pizzerias are reclaiming the name for their own creations, Regan Stephens writes.

As a new generation of Mexican chefs opened pizza restaurants around the U.S., they searched for ways to meld their cuisine with the Italian offerings. Pizzas offered a perfect canvas, with the tomato sauce replaced by tomatillo, guajillo pepper or mole sauces. Toppings can include meats — carne asada, birria, chorizo — and vegetables such as corn, roasted poblanos and avocados.

The pangram from yesterday’s Spelling Bee was gratify. Here is today’s puzzle. (Do you have questions about the Bee for its editor, Sam Ezersky? He’ll answer them in a future newsletter. Submit them here.)

News Next Desk - February 4, 2023 0
NEW DELHI: The peppiest musical number of the year by Arijit Singh came out this week and our week couldn't get any better. This...
%d bloggers like this: