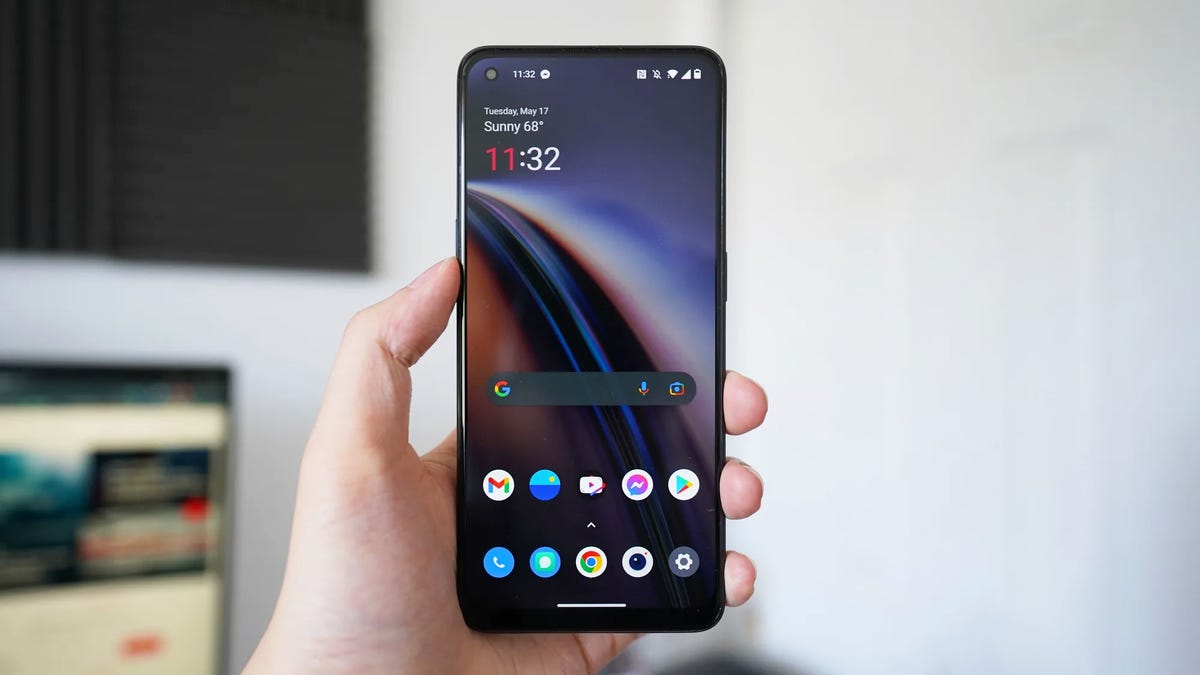 Assembling a budget phone is not a difficult task. Assembling a good budget phone is where the challenge lies. Manufacturers must mix and match affordable parts until they’re presented with a winning combination; one that strikes a feasible balance of performance, quality, and cost.

By shopping for the right parts, OnePlus has created a 5G handset that delivers where it matters the most.

What OnePlus has done with the Nord N20 5G is what I believe to be one of the better examples of the budget phone formula. Its 6.43-inch AMOLED display, 33W fast charging, and distinctive design give the device a competitive advantage in a rather bustling market. At $299, those specs alone make the phone a thrifty deal.

But after testing my review unit for about three weeks, and now having a clear idea of what the budget phone market looks like in 2022, here’s why I think the compromises matter just as much in making the Nord N20 5G a top contender.

Like last year’s OnePlus Nord N10 5G, the N20 offers a well-rounded mobile experience that seems to prioritize display and battery life. The phone runs on a dated OxygenOS 11 operating system (based on Android 11), and OnePlus says that the Nord N20 will only receive one major OS upgrade. That means that while the phone won’t be able to reap the benefits of Android 13, it will eventually transition to Android 12.

For enthusiasts, a one-year commitment is disappointing. But if you’re like my parents, who are in the sub-$300 customer segment and avoid smartphone updates because of “purposeful slow-downs,” then it can be shrugged off. I’d still recommend Google’s Pixel 6a for a more reliable Android, though.

Good hardware sells. It’s easy to forget how cheap a phone is if it just feels good in the hand. In the case of the Nord N20, OnePlus is banking on a sleek, matte-coated, design language, with flattened edges that give off an iPhone 14-esque look.

Holding the phone, I was pleasantly surprised by how sturdy and polished the plastic material felt. Not only is it less slippery than glossy-backed handhelds, but the coating does an effective job of hiding fingerprints and smudges. It also helps that the device measures just 7.5 mm thick, making it one of the slimmest phones on the market.

Surrounding the edges of the Nord N20 are most of the ports and housings that you’d expect from a budget OnePlus. There’s a 3.5mm headphone jack, a microSD card slot, a USB-C port, and some addictively clicky side buttons. But like last year’s Nord N10 5G, the infamous OnePlus alert slider is absent on this device. While the omission likely contributed to the $282 price point, the janky vibration motor in the Nord N20 was a frequent reminder of how much I missed being able to physically toggle between sound, vibrate, and mute.

OnePlus took a gamble (albeit a favorable one) with the Nord N20’s display, choosing a 6.43-inch, FHD+, 60Hz AMOLED panel over last year’s 90Hz LCD. Instead of a smoother visual experience, the AMOLED panel provides more contrast and a wider color gamut, while reducing power consumption.

I was especially impressed by how well the display handled viewing angles, a color-shifting issue that often plagues cheaper devices, including last year’s Nord N10 5G. And by going AMOLED, OnePlus was also able to cram in an in-display fingerprint sensor in the Nord N20, upgrading from the side-mounted one of its predecessors.

At first glance, you’d think that there were only two cameras on the system. The 64MP main shooter and 2MP macro lens are treated with gold-colored rings, while a much smaller 2MP monochrome lens is left in the dust, sitting adjacent to the dual-tone flash. All the protrusions are embedded into the satin back cover, giving off an aesthetic that’s refined and polarizing. While I’d love to see a white or silver color for this device, the only option available is a rather understated Blue Smoke finish.

The Nord N20 is a formidable budget phone that can handle most tasks you throw at it. It’s powered by a Qualcomm Snapdragon 695, which is no flagship processor, but good enough for browsing through the web, light multitasking, streaming 1080p videos, and posting the pictures you capture with it on social media. The Nord N20 only began to show its budget roots when I loaded up games like Asphalt 9 and NBA 2K, with both taking about three to four minutes on the initial boot. Some graphics and effects would occasionally skip frames as well, dialing between 30 and 45 fps.

The Snapdragon 695 also brings 5G connectivity, a feature that isn’t mandatory but is highly sought after among customers in any price category. The only carrier that is offering the Nord N20 is T-Mobile, meaning that specific model will have its band support limited to Magenta customers only. Fortunately, AT&T and Verizon users can look to OnePlus’s recently-launched unlocked variant. It’ll cost $299 instead of $282, but the budget value still holds true.

As I mentioned before, the Nord N20 runs on OxygenOS 11, so users who prefer the pre-ColorOS software are in for a treat. Google’s news feed is a right swipe away from the home screen, the settings menu and general UI are minimal and easy to navigate, and animations feel smooth — even on a 60Hz panel. Unless you aggressively swipe around with the navigation gestures, the phone’s 6GB of RAM just works. And for $299, that’s more than you can ask for.

It’s not the specs that bother me about the Nord N20, though. I’d say I’m most underwhelmed by its single-firing speaker at the bottom. Maybe it’s the reviewer in me that’s so used to phones with stereo, front-facing speakers, but having just one creates a few problems. First, when held in landscape mode, it’s easy to cover the speaker grille with your finger(s). With there being just one speaker, OnePlus remedies the audio output by making it louder at lower volumes. This is a bit of a double-edged sword because, at higher levels, the speaker ends up sounding tinny and exceedingly blaring. On the bright side, the Nord N20 does have a 3.5mm headphone jack.

Lastly, I have to give props to OnePlus for embedding an in-display fingerprint sensor in the phone. Even though it’s positioned a little too close to the bottom chin of the device, the optical sensor does a reliable job of reading my fingers and feels more premium to use than the side-mounted variants that I’ve tested with other sub-$300 phones.

If you’re like me, a big portion of the Nord N20’s 128GB of storage will be dedicated to pictures and videos. While the phone has three cameras in tow, the main 64MP shooter is the only one that you need.

Here’s a shot I took at the local supermarket. Naturally, there are a lot of objects to focus on, with various colors to capture. I think the Nord N20 does a great job at keeping all the cans and jars in focus, but the sharpening is a little too aggressive for my taste. Instead, I wish the camera would dial the saturation a little higher, as the image looks washed out.

Fans of black-and-white photography can utilize the 2MP monochrome lens to achieve a muted, monotone image. While I didn’t find much use in the extra camera — and you can achieve a similar output via software filters — the lens is as advertised and manages to retain most of the details in shots.

To my surprise, the Nord N20 does not have an ultra-wide lens. Besides being present in its predecessor, the landscape-centric camera lens has become such a commodity in smartphones that the lack of one is very unfortunate. I wouldn’t be surprised if it was just another way for OnePlus to save on costs.

Besides the AMOLED display, the battery is the best thing the Nord N20 has going for it. Not only is there an aptly-sized 4,500mAh cell under the hood, but the OnePlus bundles a 33W SuperVOOC charger in the box. (I repeat, the charger is in the box.) From my two weeks of testing, the phone lasted an average of five and a half hours of screen-on time (SOT), enduring what I consider to be heavy use. On most days, the Nord N20 would have about 10-15% battery left at 10 pm.

Even then, a quick 33W charge was able to top it up to the 75-80% range within 45 minutes. It’s not 125W charging like the latest OnePlus, but compared to other budget smartphones that can take up to two hours per cycle, the Nord N20 is a $299 champion.

It’s easy to be spoiled by the glitz and glamour of flagship smartphones, but I’m genuinely surprised by how well the OnePlus Nord N20 5G holds its ground in the sub-$300 level. For the price, it’s one of the cheapest phones to have a quality AMOLED panel, the performance is admirable, and the battery and charging lead the budget pack.

By shopping for the right parts, OnePlus has created a 5G handset that delivers where it matters the most. Just make sure to double-check whether you’re buying the T-Mobile model or unlocked.

Along with our running list of the best cheap 5G phones, here are some worthy alternatives to the OnePlus Nord N20 5G:

After testing the OnePlus Nord N20 5G, I rated the smartphone a 7.8 out of 10, which is very good. For less than $300, you won’t find a better OLED display and build quality on rival handsets. Performance on the Nord N20 5G is admirable, too, with the Snapdragon 695 being more than capable of running the standard suite of tasks.

When did OnePlus Nord N20 5G come out?

The OnePlus Nord N20 5G was first released on April 28 exclusively at T-Mobile. OnePlus eventually sold the unlocked variant of the smartphone on June 27 through retailers like Amazon and Best Buy.

OnePlus, a technology manufacturer based in Shenzhen, China, makes the Nord N20 5G.