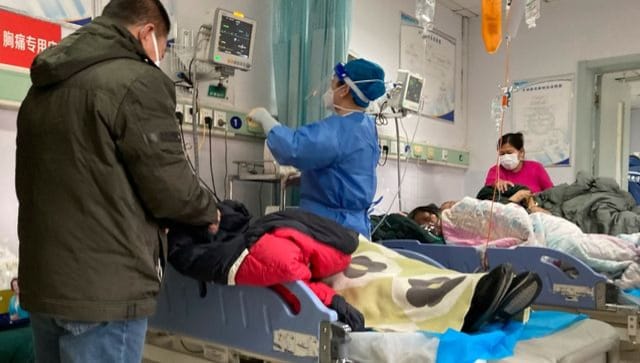 China only counts deaths from pneumonia or respiratory failure in its official COVID-19 death toll, a Chinese health official said, in a narrow definition that limits the number of deaths reported, as an outbreak of the virus surges following the easing of pandemic-related restrictions. AP.

New Delhi: Omicron BF.7 is currently the dominant variant of Covid in China that is making people fall sick, overwhelming hospitals and piling up bodies in morgues. With the worsening situation in China, people all around the world are fearing another lockdown and a possible severe wave.

But should India fret?

BF.7, the sub-variant of Omicron, is said to be highly contagious, more immunologically evasive and therefore, has a greater transmissibility. India detected first case of BF.7 variant in October this year.

So far, a total of three cases of BF.7 cases have been found in India. Two of which were reported in Gujarat, while one case was reported from Odisha, a report by news agency PTI said. Despite these three cases of the variant detected in India, there hasn’t been an overall surge in Covid cases in the country.

Dr Madhavi Joshi, senior scientist at Gujarat Biotechnology Research Centre, which detected the first case, said: “BF.7 has been found in India, but panic should not be created because it is from Omicron’s family.”

He further said that the BF.7 variant did not have a devastating impact in India, unlike other countries. However, the expert had appealed people to “wear masks, avoid gatherings and follow hand hygiene.”

Where and when BF.7 variant was first detected?

After reporting 1,760 cases of BF.7 on 12 October, China had imposed fresh lockdowns and travel restrictions across the country.

A sub-lineage of the Omicron variant BA.5.2.1, the BF.7 also had also spread in Belgium, Germany, France, Denmark and England.

Should India be worried of China’s BF.7 Omicron variant?

Despite having immune-evasive characteristics and worrying pace of mutation in China, BF.7 variant of Omicron appears to be remaining fairly steady elsewhere.

In the US, it was estimated to account for 5.7 per cent of coronavirus cases up to 10 December, down from 6.6 per cent a week prior.

*The first case of BF.7 variant was reported in India in October. However, the country did not see a spike in infections even after festivals like Navratri and Diwali.

Why is the scenario different in China?

China is inoculating its population with its home-grown Covid vaccines which according to reports are only about 60 per cent effective against the severe infection in comparison to over 90 per cent protection offered by mRNA vaccines.

According to World Health Organization (WHO), 87 per cent of Chinese population is vaccinated with two shots of the local homologous vaccines, Sinopharm and Sinovac-Coronavac. Only 55 per cent, however, have received a booster shot.

Notably, the elderly who are more vulnerable to serious illnesses have been particularly resistant to booster shots.

A document by the Institute for Health Metrics and Evaluation (IHME) at the University of Washington said, “Although there is a high rate of vaccination, comparatively low effectiveness of the vaccines used in China against Omicron and the long duration since vaccination for many individuals mean that 80 per cent of the population is susceptible to Omicron infection.”

Also, R0, pronounced as R-naught, of BF.7 might be high due to a low level of immunity in the Chinese population from previous infection, and possibly vaccination.

Experts say that BF.7 Omicron variant could counter the antibodies present in people due to previous infections or vaccinations.

The several symptoms associated with the BF.7 sub-variant are similar to other sub-variants of Omicron.

Must Read: WATCH: Medical services in China crumble under unprecedented COVID surge as bodies pile up

One should also be cautious of other COVID symptoms including abdominal pain, diarrhoea and fatigue.

How dangerous is BF.7 variant of Omicron?

Epidemiologist Eric Feigl-Ding has predicted that COVID deaths in China are likely shoot up to millions. He estimates that more than 60 per cent of the population in China will be infected in next 90 days.

Being a sub-variant of Omicron, BF.7 reportedly has enhanced immunity evasion in comparison to its parental strain. This means that a person who has already been infected before of has taken Covid vaccine shots can get infected with BF.7.

Earlier, WHO warned against the BF.7 Omicron variant, saying it could become the new dominant variant.