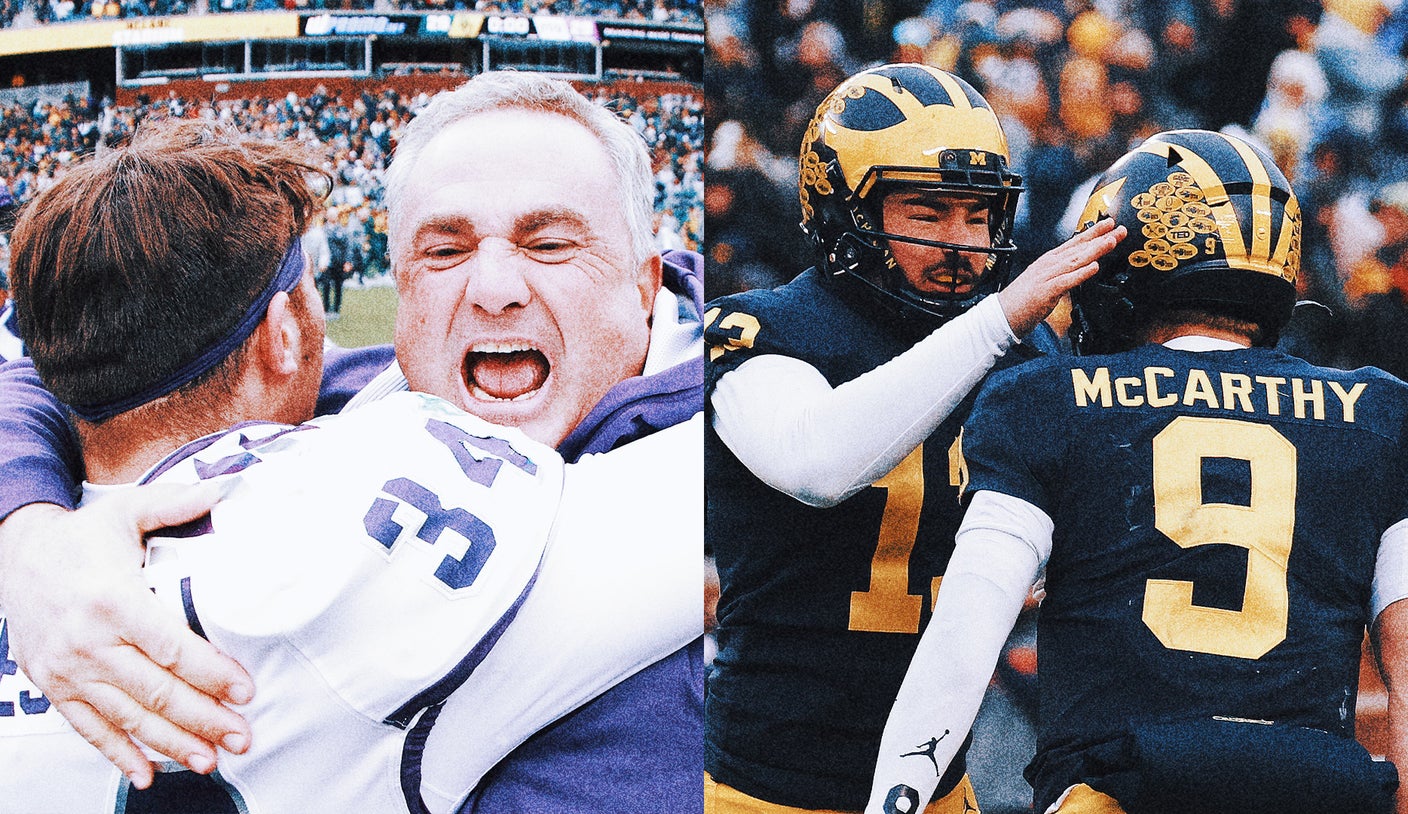 Saturday’s college football slate started off with a pair of thrilling finishes that nearly caused major upheaval in the College Football Playoff rankings.

While No. 4 TCU and No. 3 Michigan managed to avoid upset bids by unranked Baylor and Illinois, respectively, with each drilling a game-winning field goal in the final minute, the tone was set for a wild day of college ball. In the SEC, Vanderbilt beat Florida at home for the first time since 2013, much to the delight of Vandy alumnus Skip Bayless.

After getting the ball back with just more than 90 seconds remaining, TCU quarterback Max Duggan led the Horned Frogs into field goal range. But TCU opted to run the football one final time, which forced the Horned Frogs’ field goal unit to scramble onto the field in “fire-drill” mode.

Kicker Griffin Kell nailed the kick anyway, moving TCU to 11-0 on the season for the first time since 2010.

Afterward, TCU coach Sonny Dykes told FOX Sports’ Bruce Feldman that the Horned Frogs had been practicing for such a moment all season.

And yes, there was another psychedelic frog video from the TCU Football account.

Michigan seemed ready to crumble after star running back Blake Corum exited due to injury in the first half and was limited for the remainder of the game. But quarterback J.J. McCarthy led a game-winning drive of his own in the final minutes, capped off by a 35-yard field goal from kicker Jake Moody to keep the Wolverines unbeaten.

Michigan can now clinch the Big Ten East with a win over archrival Ohio State on “Big Noon Kickoff” next Saturday.

Perhaps the most surprising result of the day came out of Nashville. Vanderbilt snapped an eight-game losing streak against Florida, beating the Gators for just the second time — and first time at home — since 1988. It marked the second time in as many games that the Commodores beat an SEC East rival after entering the game as double-digit underdogs. The last time Vanderbilt won two games as double-digit underdogs across an entire season was in 2005.

A certain Vanderbilt graduate was thrilled at the outcome.

Meanwhile, head coach Clark Lea — a Vanderbilt alumnus himself — celebrated with the team in the locker room.

News Next Desk - December 5, 2022 0
France looked the part of defending FIFA World Cup champion on Sunday, defeating Poland 3-1 in the round of 16 to...

News Next Desk - December 4, 2022 0
Almost 6 million tons of wheat was collected from areas not under Ukrainian control, according to NASA Harvest. Ukraine has lost at least...

News Next Desk - December 4, 2022 0
New Delhi: Prime Minister Narendra Modi reached Ahmedabad on Sunday evening for exercising his franchise in the second and final phase of the Gujarat...

News Next Desk - December 4, 2022 0
Google has announced that it's bringing end-to-end encryption to group chats in the Google Messages app. The security upgrade is heading to beta users...

News Next Desk - December 4, 2022 0
Shivraj Singh Chouhan, the chief minister of Madhya Pradesh, referred to "Love Jihad" when he remarked on Sunday that individuals of other religious convictions...

One licence for all insurance: Bill likely in budget session

News Next Desk - December 4, 2022 0
The government is likely to introduce the Insurance Laws (Amendment) Bill, 2022, which will pave the way for issue of composite licence to insurers,...
%d bloggers like this: