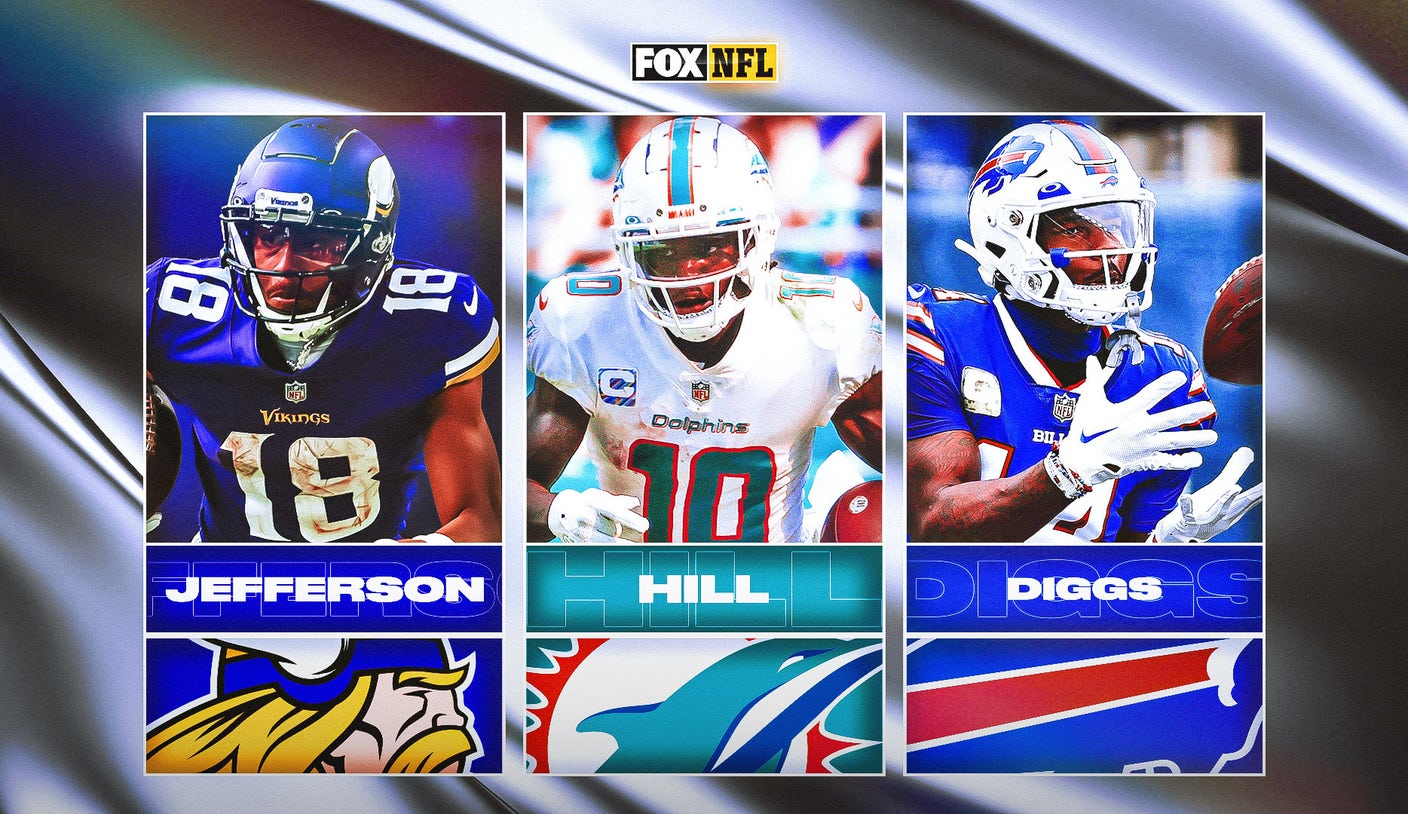 It’s hard not to look at the wide receivers in today’s NFL without concluding we’re truly spoiled. It could easily be argued the position has never been stronger at the very top; nor has it been deeper throughout the league. Cooper Kupp is coming off the receiving triple crown and an Offensive Player of the Year Award. Even before his ankle injury, it would have been difficult to argue he was the league’s best receiver. Let that sink in.

FOX Sports’ crew of NFL writers took on the difficult task of differentiating between the league’s very best wide receivers. Each writer ranked their best 10 based on their confidence in each wide receiver’s ability (with good health assumed) in a hypothetical game right now. A first-place vote merited 10 points in our methodology and descended from there, down to a single point for 10th place. We then combined the scores to determine our rankings. Yes, the top two receivers were quite close.

Let’s not be prisoners of the moment. Yes, Justin Jefferson was sensational in Minnesota’s OT win over Buffalo last week. But Hill leads the NFL in targets (106), receptions (81) and receiving yards (1,148). And Hill has been a big part of making the Miami Dolphins an explosive offense with his arrival in South Beach. —Eric D. Williams

There’s a case that Tyreek Hill could be the MVP this season. He has transformed Tua Tagovailoa and the Dolphins offense. Not many receivers can leave a Hall of Fame QB and be the same player. Look at Davante Adams. —Geoff Schwartz

There’s no denying Hill’s impact, especially as he’s doing this without Patrick Mahomes. But it’s hard to argue against Jefferson’s incredible blend of route running, hands and big-play ability. If he’s not the best in the league right now, his day is coming. —David Helman

Especially after this past weekend in Buffalo, Jefferson is top-two — and I don’t think he’s two. Not only does Jefferson make that catch, routinely making circus-level acrobatics look easy, he comes up clutch when quarterback Kirk Cousins needs him most. Jefferson has six games this season over 100 yards and just set a new single-game high of 193 on 10 catches against the Bills. Plus! He blocks! The start of Minnesota’s comeback in Buffalo was an 81-yard touchdown run by running back Dalvin Cook, and it was Jefferson’s block that got him one-on-one with the Bills defender, whom he beat easily all the way to the house. —Carmen Vitali

Vikings receiver Justin Jefferson couldn’t be stopped by Buffalo’s defense as he pulled in a magnificent catch late in the fourth quarter.

His arrival in Buffalo changed everything about QB Josh Allen and the Bills. He does what Tyreek Hill does in Miami, only he doesn’t have a strong No. 2 receiver to help him out — nor does he have the advantage of warm Florida weather. —Ralph Vacchiano

One of the best route runners in the NFL, last year’s triple crown winner also can make plays after he catches the ball. Since 2021, Kupp leads the NFL in yards after catch with 1,322, according to Next Gen Stats. —Williams

He might be headed to IR, but that doesn’t take away what he accomplished in what is, frankly, a putrid offense. He carried the unit, with 75 catches, 812 yards and six touchdowns. Heading into Week 10, when he suffered the ankle injury, he was on pace to set an NFL record for receptions in a single season. —Henry McKenna

Not even the Raiders’ dysfunction can diminish the greatness of Adams. He’s still a top-five receiver in the league, with his elite savvy and route-running skills. The 29-year-old leads all wide receivers with eight receiving touchdowns, and he’s on pace for his third straight 1,300-plus-yard season. —Ben Arthur

We have to separate the offense from the player. Adams is elite. His offense is not. —Schwartz

The 4-6 Green Bay Packers really, really miss Adams. That has to be endorsement enough. —Vitali

Hopkins single-handedly changed Arizona’s production on offense with his return from a six-game suspension this season, and he has maybe the best hands in the NFL. —Williams

A lot of my ranking had to do with what each receiver means to his team, and there is arguably no one who means more to his offense, and his quarterback, than Hopkins. In his first two games back from his suspension, he went over 100 yards receiving as quarterback Kyler Murray looked like a new man. He has a 71.5% catch rate with Arizona and was a three-time All-Pro before arriving in the desert. —Vitali

Throw out the stats. If I need an explosive play, Chase’s blend of physicality and explosive athleticism puts him on the short list of receivers I’d want to throw to. —Helman

Is it fair to say he’s having a quiet year? In seven games, Chase has 47 catches for 605 yards and six touchdowns. That puts him out of the top 10 in all categories but touchdowns. Call it a sophomore slump if you like, but there’s little doubt in my mind that he’s going to make a statement in the coming weeks. He’s elite. —McKenna

He’s on pace for 90 catches and nearly 1,600 yards, and we’re all still going to wonder why the Eagles aren’t using him more. He has elite receiver skills, but he’s been cursed with being on teams that prefer to run the ball. —Vacchiano

If you were to look up the word dependable, Evans’ name would be next to it. He’s the first player in NFL history to begin his career with eight straight 1,000-yard seasons. We don’t talk about that enough. The Bucs offense also has no shot without him on the field. He gets them chunk yardage on nearly every reception, averaging 11.18 yards per catch, which ranks eighth in the league. Give this man his flowers, please. —Vitali

McLaurin has yet to make a Pro Bowl, but what he’s done with a rotating cast of average quarterbacks since he entered the league in 2019 is nothing short of extraordinary. He’s on pace for more than 1,250 receiving yards this season, which would be a career high. He’s had more than 1,000 receiving yards each of the past two seasons. Maybe most importantly for the Commanders, he has been an incredible leader for a franchise that always seems to be in the news for the wrong reasons. —Arthur

He has never had a good quarterback. His best QB was probably Case Keenum. Seriously. And yet Scary Terry puts up big numbers. Example A? During Washington’s upset of the then-undefeated Eagles, he managed eight catches for 128 yards with Taylor Heinicke throwing him the ball. —McKenna

This ranking was compiled by: