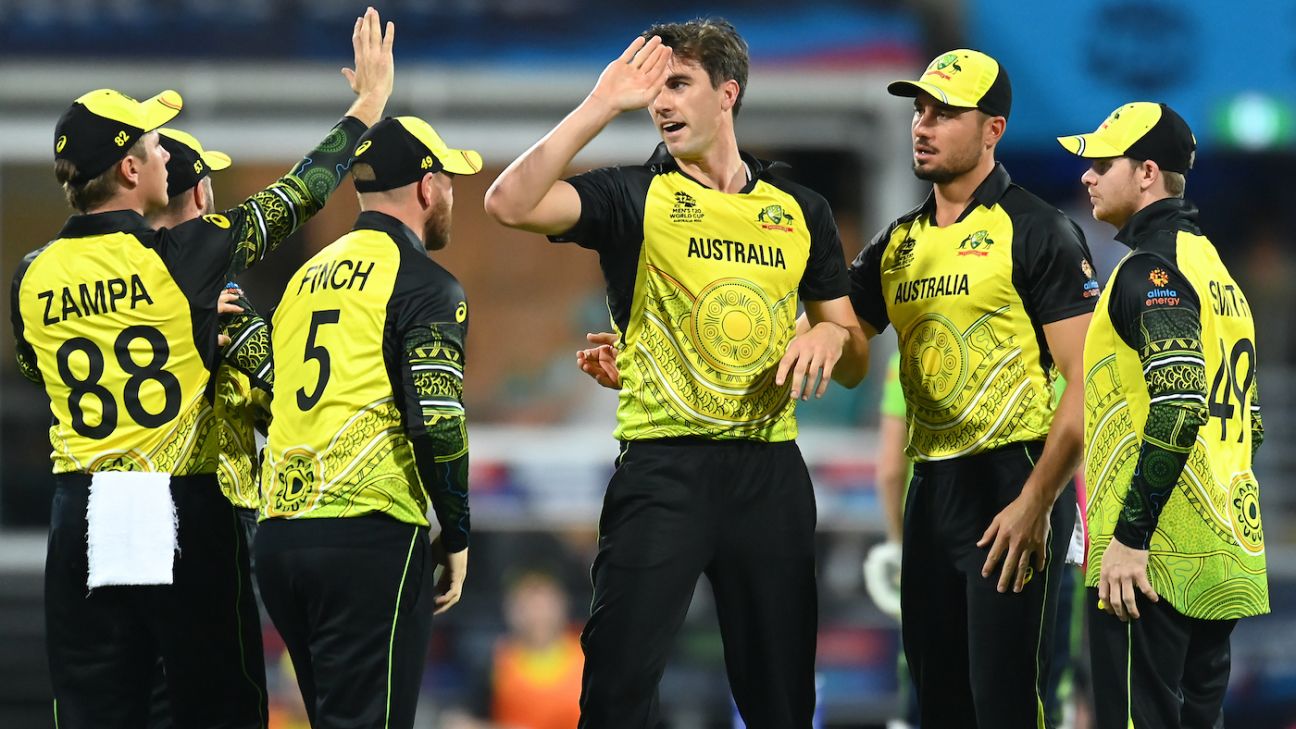 Underlining the increasingly congested cricket calendar, newly-minted T20 World Cup champions England have had to snap out of revelry and attempt to somehow focus on a seemingly inconsequential three-match ODI series against Australia.

Around 72 hours after partying into the wee hours of Monday, a slew of England’s title-winning heroes will be back on the field for the series opener on Thursday at the Adelaide Oval.

While it might be difficult for England to be particularly motivated, Australia should be fresh and determined to rebound after their disappointing title defence at the T20 World Cup. Australia have selected an almost full-strength squad to start a new ODI era under the reins of Pat Cummins, who has taken over the captaincy from the retired Aaron Finch.

On paper, the series feels rather trivial and lacking context as it is not part of the World Cup Super League. Crowd numbers for the games in Adelaide, Sydney and Melbourne are expected to reflect the lack of mainstream interest. Only 18,000 fans attended Australia’s must-win T20 World Cup match against Afghanistan in Adelaide earlier in the month – a figure you feel Cricket Australia would gladly take for the first ODI.

It might be something of an afterthought – and you could certainly understand if England are feeling sluggish – but the series still holds some importance. It effectively kick-starts preparations for the 50-over World Cup in India, which is less than 12 months away, and provides an opportunity for the last two World Cup champions to experiment and tinker with their line-ups.

Australia had ODI series victories against Zimbabwe and New Zealand in Queensland in August-September, while England’s form was patchy during their home summer.

After being contentiously left out of Australia’s aforementioned match against Afghanistan, having struggled at the T20 World Cup where he was sometimes held back from his customary new ball role, Mitchell Starc will be determined for a bounce back in the ODI series. The new ball was taken away from him after he conceded 14 runs in Australia’s opening over of the tournament against New Zealand in a huge defeat, which ultimately proved fatal for their title defence. As evidenced by his omission against Afghanistan, Starc’s future in Australia’s T20I line-up is uncertain but he remains a core in their ODI bowling attack, and a return to opening the bowling might prove the tonic he needs.
While many of England’s players might be struggling to get up for the contest, Jason Roy has a point to prove after being overlooked for the T20 World Cup as his replacement Alex Hales enjoyed a stirring comeback. But Roy has been backed in as the preferred 50-over opener and will be looking to repay the faith after a breather. But he will have to contend with a fired-up Australia pace attack looking to find form ahead of the upcoming two-Test series against West Indies starting later in the month.
Australia have selected a near full-strength line-up although batting allrounder Glenn Maxwell will miss the series after breaking his left leg during a freak accident at a friend’s birthday party. Marcus Stoinis and Cameron Green are set to comprise the middle order, while Travis Head gets the first crack to replace Finch as an opener in front of his home faithful.
Marnus Labuschagne and wicketkeeper Alex Carey return to the line-up, while Steven Smith will bat at No. 3- after mostly being on the outer at the T20 world Cup. Cummins has recovered from a bout of gastro in time to lead the ODI team for the first time.

While they will be without Ben Stokes, who remains retired from ODI cricket, England will rely on several players who weren’t part of the T20 World Cup squad to provide a spark. Roy, James Vince and Sam Billings will be aiming to do just that, while fast bowler Olly Stone is in line to play his first ODI in four years.

Sunny conditions are forecast in Adelaide with a maximum temperature of 23 degrees, which is set to aid the normally batting-friendly pitch at a ground marked by short square boundaries. Bowlers generally aim for a fuller length to force batters to hit to the longer straight boundaries, while turn is usually evident.

News Next Desk - December 6, 2022 0
Meta has been hit with a lawsuit for allegedly infringing upon users' right to privacy by collecting data from users of popular third-party tax...

Facebook parent Meta threatens to remove news from platform if US...

News Next Desk - December 6, 2022 0
Facebook parent Meta platforms Inc has warned that it will be forced to remove news from its platform entirely if the US Congress passed...

Final words on USMNT, Nick is sticking with Brazil winning 2022...

From alien attack to lab babies: Baba Vanga’s predictions for 2023...

News Next Desk - December 6, 2022 0
The year 2022 is about to end the world is excited for the upcoming year. With new energy and enthusiasm, people are waiting to...

Shein will spend $15 million on “improving standards” at factories after...

News Next Desk - December 6, 2022 0
Online shopping behemoth Shein will spend $15 million on upgrades to its suppliers’ factories, the company announced today. The news follows a UK documentary...
%d bloggers like this: