Home World ‘My dad will be king, you better watch out’: When Prince George... 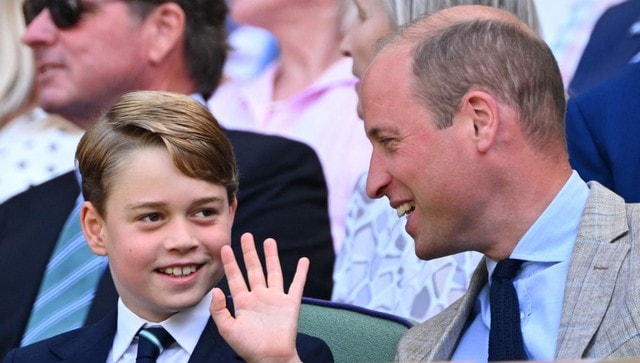 Prince George will be second in line after his father to become the next British monarch. AFP

Not even a month since his grandfather became the King after Queen Elizabeth’s death, young Prince George is already throwing his weight around.

The author of The New Royals: Queen Elizabeth’s Legacy and the Future of the Crown, Katie Nicholl, said in her book that the eldest son of Prince William and Kate Middleton told his peers that they “better watch out”, for his father will be the king one day. While the book will release on 4 October, the extract, which has been made available to the media, is going viral.

What does the book reveal about William’s children?

Based on what George told his peers at school, Katie Nicholl said that the young prince is very much aware that he will one day be the king.

She wrote, “They are raising their children, particularly Prince George, with an awareness of who he is and the role he will inherit, but they are keen not to weigh them down with a sense of duty.”

The book also talks about how his younger siblings, Princess Charlotte and brother Prince Louis are being raised with an understanding of their royal duties under the British Crown.

Has George been told about his royal destiny?

Although it’s clear that Prince George will someday take over the throne, the royal biographer Robert Lacey said, “Sometime around the boy’s seventh birthday in the summer of 2020 it is thought that his parents went into more detail about what the little prince’s life of future royal ‘service and duty’ would particularly involve,” according to his book Battle of Brothers.

Lacey further claims that Prince William and Princess Kate had planned to break the news to their eldest son so that he wouldn’t find out accidentally and be all confused, according to a report in The Mirror.

The author added that the details of this chat with the young prince are not confirmed. Lacey said, “William has not revealed to the world how and when he broke the big news to his son. Maybe one day George will tell us the story himself.”

As per Woman&Home, the author also revealed that Prince George’s parents stalled the decision of telling their son until he turned seven as the news of becoming a king had a negative impact on his father.

What are the recent other revelations about the royals?

Apart from what Prince George said, Katie Nicholl also wrote in her book that a personal friend of Queen Elizabeth spoke to the royal author about the late Queen’s thoughts on Prince Harry and Meghan Markle. The excerpt from her book, according to a report by South China Morning Post, said that the Queen was “exhausted” by the repercussions of Harry and Meghan’s step back from the royal family.

Another upcoming book, called Courtiers: The Hidden Powers Behind the Crown written by Valentine Low has revealed that Meghan Markle had once complained about not being paid for her first royal tour where she travelled to Australia, Fiji, Tonga and New Zealand with her husband in 2018. The author wrote that Markle was overheard saying, “I can’t believe I am not getting paid for this.”

What is the British line of succession?

After the Queen’s death, the British line of succession changed.

After King Charles succeeded Queen Elizabeth, Prince William is now the heir apparent. Following him, Prince George is second in line to become the next British monarch.

According to a report by The Guardian, after the death of her great-grandmother, Princess Charlotte has become the senior-most female royal in terms of succession.

After his elder brother George, the four-year-old Prince Louis is in line to become the king.

Prince George’s “brag” about his family to his pals has led some users to equate the young prince with “Dilli wala” or someone who’s from Delhi.