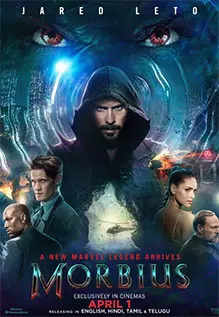 STORY: When an ailing genius finally manages to invent a cure for his rare blood disease, it infects him with a form of vampirism instead. He gets the superpowers, but it also turns him into a killer. Can he save the world from himself and the one who wants to misuse his invention?

REVIEW: Just like most Marvel movies, this one too is essentially a story of the good versus the evil. Dr. Michael Morbius (Jared Leto) is a Nobel Prize-winning scientist, who has suffered from a crippling blood disease since childhood, but that hasn’t stopped him from helping others. He succeeds in creating a cure for his own disease that can help millions, but it soon becomes a curse, as it turns him into a blood-thirsty vampire. However, Morbius is more aware of who he is and does whatever it takes to stop him from taking innocent lives, but his surrogate brother Milo (Matt Smith) isn’t all that evolved. Suffering from the same disease as Morbius, a resentful Milo embraces the demonic powers of the new ‘cure’ and unleashes a reign of terror in the city. The only one who can stop him is Dr. Morbius. Or can he?

Well, you know it’s a question that doesn’t have an easy ‘yes’ or a ‘no’ answer. One would have to sit through the film even after the credits roll and yet some things are left open to interpretation. ‘Morbius’ follows this routine where director Daniel Espinosa and his co-writers (Matt Sazama and Burk Sharpless) give us a simple premise that pretty much stands alone as a story.

The narrative builds fast into a confrontation that we see coming from miles away, but there’s some thrill in the way it’s executed. There’s no overkill of action and bloodshed but is peppered throughout the screenplay in a way that it leaves an impact. Of course, it’s ultimately a comic book story, so looking for logic will do little good here. Like for example, a prime murder suspect goes around sipping coffee with his fiancé in a crowded café even when the police is hot on his trail. He casually walks out in a hoodie and no one recognizes him despite being all over the news. There’s more scientific mumbo-jumbo too, but thankfully not overwhelmingly complex and detailed.

The constantly eerie and dark atmospherics dominate the screen as both the hero and the villain use their powers to do what they think is right. The only colourful part here is the way Dr. Morbius and Milo leave behind smoky psychedelic traces, as they go about jumping rooftops and falling from high-rises. The runtime is short but the climax is quite abrupt, which we’re sure is by design.

Jared Leto lends himself easily into the character of Morbius with constantly brooding looks and mysteriously deep eyes that change colour. The CGI work, especially on the facial features, is quite intriguing and scary. Matt Smith and Adria Arjona are good as Milo and Martine respectively, not outstanding. It’s also because the overall writing of the story and the characters is quite standard, which doesn’t leave them with much scope to perform.

Overall, ‘Morbius’ just about ticks all the boxes for a superhero film with plot twists that are neither unpredictable nor entirely satiating. Watch out for the thrilling moments, gravity-defying stunts and special effects that compensate for what’s missing in making it the action-adventure extravaganza it was expected to be.