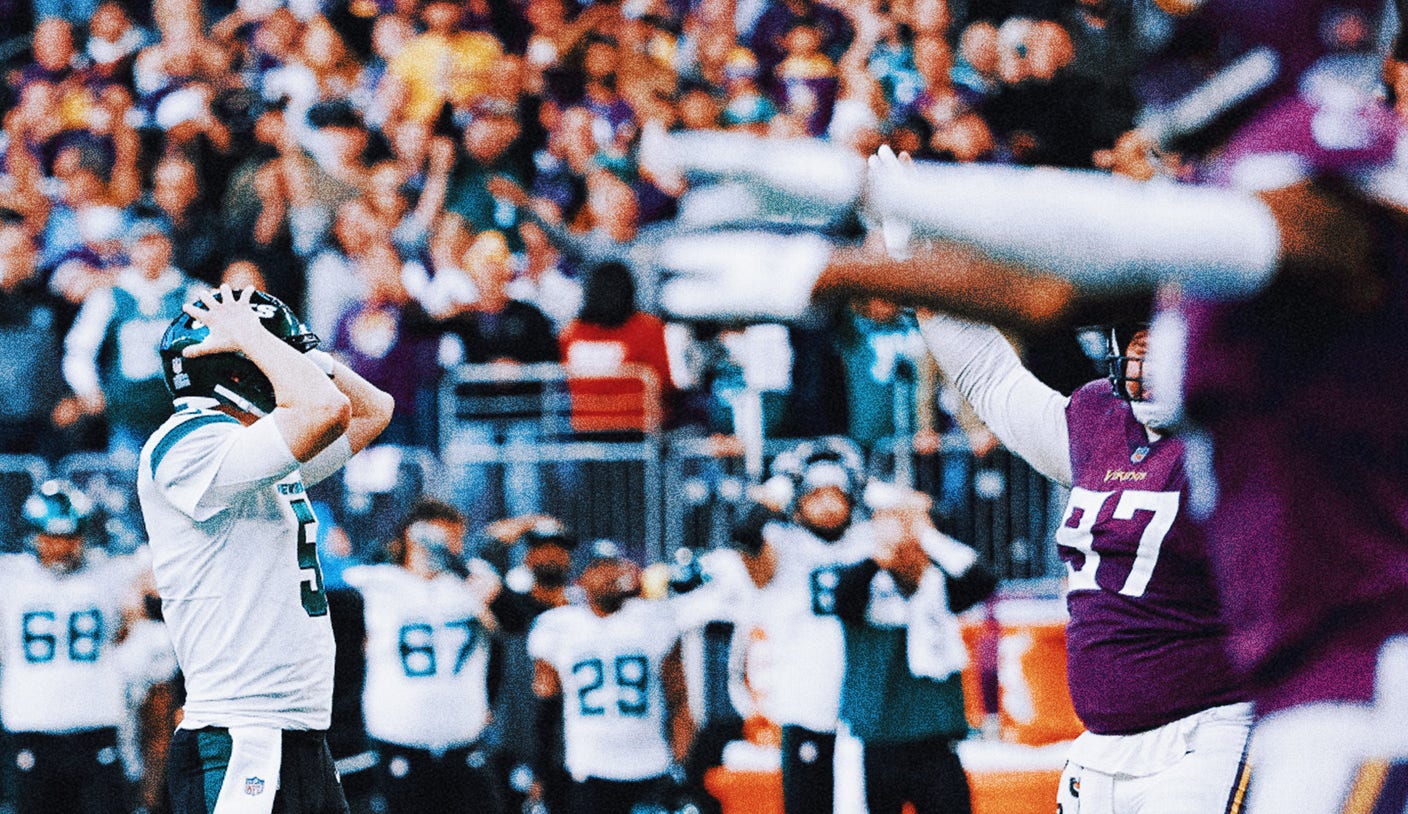 The Minnesota Vikings‘ performance against the New York Jets was perfectly predictable. The Vikings played dead — playing beneath themselves — for most of the first three quarters, then they showed up in the fourth quarter. Justin Jefferson made a game-changing play, a 10-yard touchdown catch.

But the 7-5 Jets made things interesting. They battled the Vikings with an impressive edge.

QB Mike White, in particular, nearly upended the predictable ending. There was no telling if he could do what so many other quarterbacks have struggled to do against this Minnesota defense. He looked poised to steal away the Vikings’ lead in multiple fourth-quarter moments.

It seemed like every single fourth-quarter drive was a chance for White to take the lead. But the second New York entered the red zone, its offense went to shambles.

The Jets finished all six of their second-half drives in the red zone. They converted those appearances into just 16 points, just 2.6 points per trip. New York managed just one touchdown in the game, with White rushing for a quarterback sneak from the 1-yard line.

It was in the red zone that New York’s play calling got unimaginative. The Jets struggled to stretch the width of the field. They struggled with spacing. And they were predictable, with the Vikings seeming to know exactly when the Jets would run or pass.

White’s final red-zone trip was emblematic of his shortcomings. He helped engineer yet another impressive drive, yet on third down, he misfired to Elijah Moore near the sideline for what would have given his team a first down and put the Jets on the eight-yard line. Then he had an inaccurate throw to Braxton Berrios, who couldn’t corral the off-frame target. Yes, White was under pressure. Yes, both attempts were high-difficulty. But he needed to hit them to win — and he didn’t.

It’s tough weighing those two throws against a greater takeaway: The Jets looked substantially better under White. And although I think he disappointed in this game, he provided glimmers of hope, given this is just his fifth career start.

White took the blame afterward, but this is also on Jets offensive coordinator Mike LaFleur.

Otherwise, the Jets relied upon kicker Greg Zuerlein, who finished 5-of-5 on field goals and 1-of-1 on PATs for 16 points.

This is what the 10-2 Vikings do. They tease you by allowing yardage. They excite you by letting up efficient drives. They thrill you with a tight fourth quarter. But then the Minnesota defense clamps down in the red zone. And it snuffs out all fourth-quarter comeback efforts.

So the Jets disappointed, even though White threw for 369 passing yards and Zonovan Knight posted 90 rushing yards and Garrett Wilson lit up the stat sheet with 162 receiving yards (and a 24-yard defensive pass interference).

That will make life difficult for the Jets as they consider what to do next at quarterback. On one hand, White let down his team, with major red-zone inefficiency. But on the other hand, he did exactly what Josh Allen and Mac Jones and so many other quarterbacks have done against the Vikings. And when considering the alternative — Zach Wilson — I think the Jets would have to be insane to think he would have fared better than White.

Although White, the newly minted starter, missed a handful of throws (including an egregious overthrow down the sideline to an open Garrett Wilson in the fourth quarter), he is also settling into this offense in a way that Zach Wilson never did. White has this team operating at a higher level in the passing game and at a similar level in the rushing game.

News Next Desk - January 27, 2023 0
Fashion designer Masaba Gupta has tied the knot with her beau Satyadeep Misra, whom she met on the set of the Netflix show 'Masaba...

How the FBI and hacktivists infiltrated ransomware gang Hive and recovered...

News Next Desk - January 27, 2023 0
The massive employee layoff by Google resulted in one software engineer who was sacked just after his mother passed. The mega global layoff by some...
%d bloggers like this: