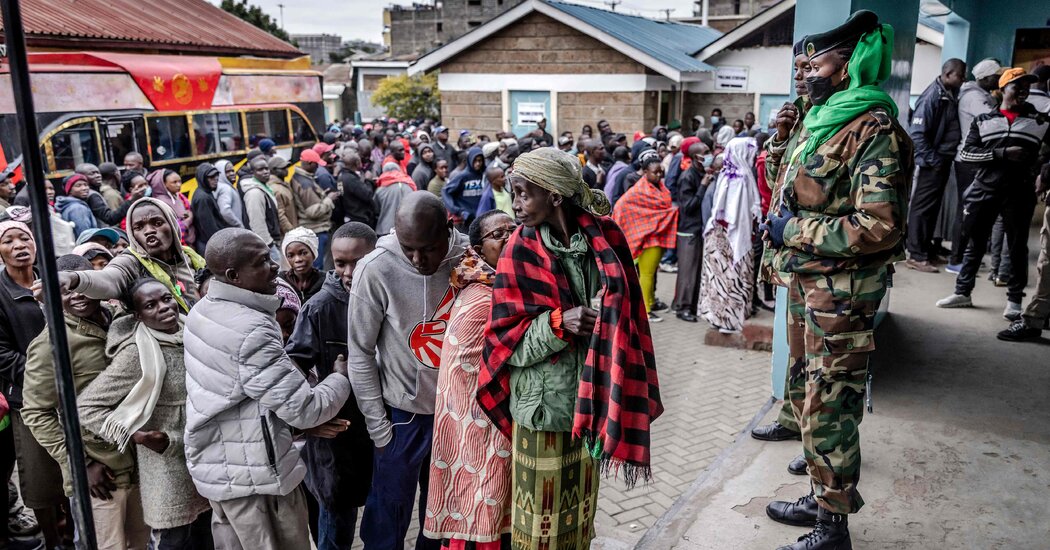 One is the self-declared champion of the “hustler nation.” The other is a veteran leftist making his fifth run for high office. Both are products of Kenya’s calcified, corruption-ridden political system, yet claim they can transform it — if elected president.

The hotly contested race to lead the bellwether East African nation of Kenya is reaching its climax on Tuesday as 22 million registered voters face a choice between William Ruto, 55, currently the country’s vice president, and Raila Odinga, a 77-year-old political veteran who is making his fifth bid for the presidency.

Days from the vote, the race was a nail biter — a testament to Kenya’s maturing democracy, which, despite its flaws, stands in contrast to other African countries where once-high democratic hopes have given way to sham votes and military coups in recent years.

To its Western allies, that is one reason Kenya — a burgeoning technology hub, important counterterrorism partner, and anchor of stability in a region roiled by starvation and strife — matters more than ever.

Still, Kenyan elections have a history of being messy, unpredictable affairs. Previous polls were marred by widespread violence, lengthy courtroom dramas and, in 2017, the murder of a senior electoral official just days before the poll.

So far this time, the election season has been largely tranquil, with even some hopeful signs of change. The corrosive ethnic politics that have dictated Kenya’s politics for decades are showing signs of softening. Fewer people fled their homes before the voting — in fear that the homes might be burned down — than before.

The results are expected to start to come in later in the week — along with, almost inevitably, claims of rigging by the loser — so anxious Kenyans will be holding their breath until then.

The two main candidates are distinguished by style as much as substance. Mr. Ruto is the self-styled champion of Kenya’s “hustlers” — the masses of frustrated youth, many of them poor, who are struggling to succeed in life. “Every Hustle Matters” reads the slogan across his blinged-out campaign vehicle.

Mr. Ruto is determined and ambitious, although he also has a reputation for ruthlessness. A decade ago, he was facing trial at the International Criminal Court on charges of orchestrating violence after the 2007 election, in which over 1,200 people were killed. The case collapsed in 2016 after the Kenyan government withdraw its cooperation and key witnesses recanted their testimony.

Mr. Odinga, the scion of a storied Kenyan political dynasty, offers familiarity — he has been vying for high office since the 1990s — as well as a sense of historical vindication. His numerous failures to win the presidency have deepened a sense of grievance among his fellow Luo, Kenya’s fourth largest ethnic group, at never having held the country’s top position.

He was widely praised for his choice of a running mate, Martha Karua, a lawyer with a history of principled activism who, if elected, would be Kenya’s first female vice president.

Mostly, though, Mr. Odinga’s success in this election comes down to a political alliance, known as “the handshake,” that he struck in 2018 with President Uhuru Kenyatta.

That deal ensured that Mr. Kenyatta, from the dominant Kikuyu ethnic group, is backing Mr. Odinga — and in turn made an enemy of Mr. Kenyatta’s deputy, Mr. Ruto, who has spent much of the campaign criticizing his former boss.

The winning candidate needs 50 percent of votes, plus one more. But a third candidate, George Wajackoyah — who is campaigning on a platform of marijuana legalization and, more unusually, the sale to China of hyena testicles, said to be of medicinal value — could be a spoiler.

If Mr. Wajackoyah can convert his support base, estimated at 3 percent in one poll, into votes, he could deny the main candidates a majority and push the vote to a second round.