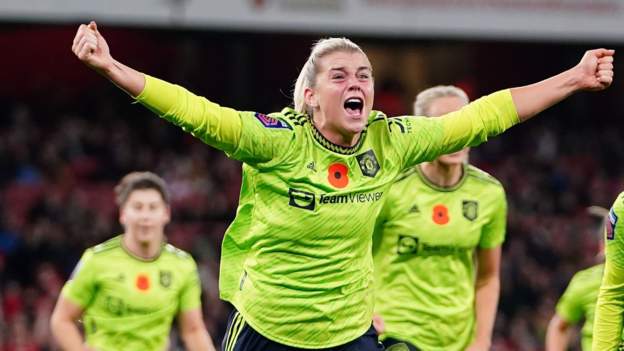 In front of more than 40,000 fans at Emirates Stadium, Arsenal trailed to an Ella Toone goal at half-time.

They equalised when Frida Maanum’s shot took a deflection off Maya Le Tissier, before Laura Wienroither looked to have earned a 15th straight league win.

But headers by Millie Turner and Alessia Russo in the final five minutes completed a sensational turnaround.

It ends a 14-game league winning run for Arsenal, while United showed why they could be real title contenders under boss Marc Skinner.

Inspired by Toone from midfield, they secured a win which moved them level on 18 points with Arsenal and Chelsea at the top of the WSL.

With no men’s Premier League action this weekend and the World Cup yet to start, the WSL was in the spotlight on Saturday – and an extraordinary end to this game ensured that focus was not wasted.

After an inert first half, Arsenal were sparked into life 37 seconds after half-time.

Maanum ran with the ball from inside her own half, and the Norwegian’s shot was heading off target until it flew off the back heel of Le Tissier and into the opposite corner over the helpless Mary Earps.

Vivianne Miedema was introduced to huge cheers with just over half an hour left to play, but it was the much less heralded Wienroither who looked to have scored the winner with 17 minutes left, racing on to a deep cross from full-back partner Katie McCabe and brilliantly half-volleying home from 10 yards.

However United battled all night and took the win with two headers from set-pieces.

On 85 minutes, Katie Zelem put a free-kick on a six pence and Turner thumped a header against the crossbar and over the line.

The turnaround was then completed in stoppage time as Russo turned the ball into the corner of the net, sparking celebrations in a packed away end.

Both Arsenal men and women were top of their respective leagues going into this weekend, and the buzz around Emirates Stadium pre-match was about the possibility of a unique double this season.

Arsenal had won 14 consecutive league games going into this match, but in an inert opening 45 minutes they were completely stifled by United.

England’s Beth Mead, Jordan Nobbs and Lotte Wubben-Moy all started, but the Lionesses failed to roar as United dominated possession and took a deserved lead following a goalkeeper error.

Arsenal’s Manuela Zinsberger had made a fine early save to palm away a Leah Galton effort, but she had already skewed one punch before she flapped at Hayley Ladd’s 39th-minute cross from the byline, allowing Toone to side-foot home.

So poor were Arsenal in the first half, the brightest moment came when the home fans put on a light show with their mobile phone torches.

They improved markedly in the second half, however were ultimately outfought by a United side who had won their opening five games before a 3-1 home defeat to Chelsea a fortnight ago saw them slip to third in the table.

This time they kept their belief as they prevented Arsenal’s silky front three from getting into any sort of groove, before earning three points in truly dramatic circumstances.

And there were worrying scenes at the end for the Gunners as Mead was seen in tears after being substituted with an injury.

Skinner had called for “brains on seats” before the game, meaning that women’s football has to attract dedicated fans rather than day trippers.

If the 40,064 spectators at this game have some sense, they will surely think to come back for more after that spectacular conclusion.