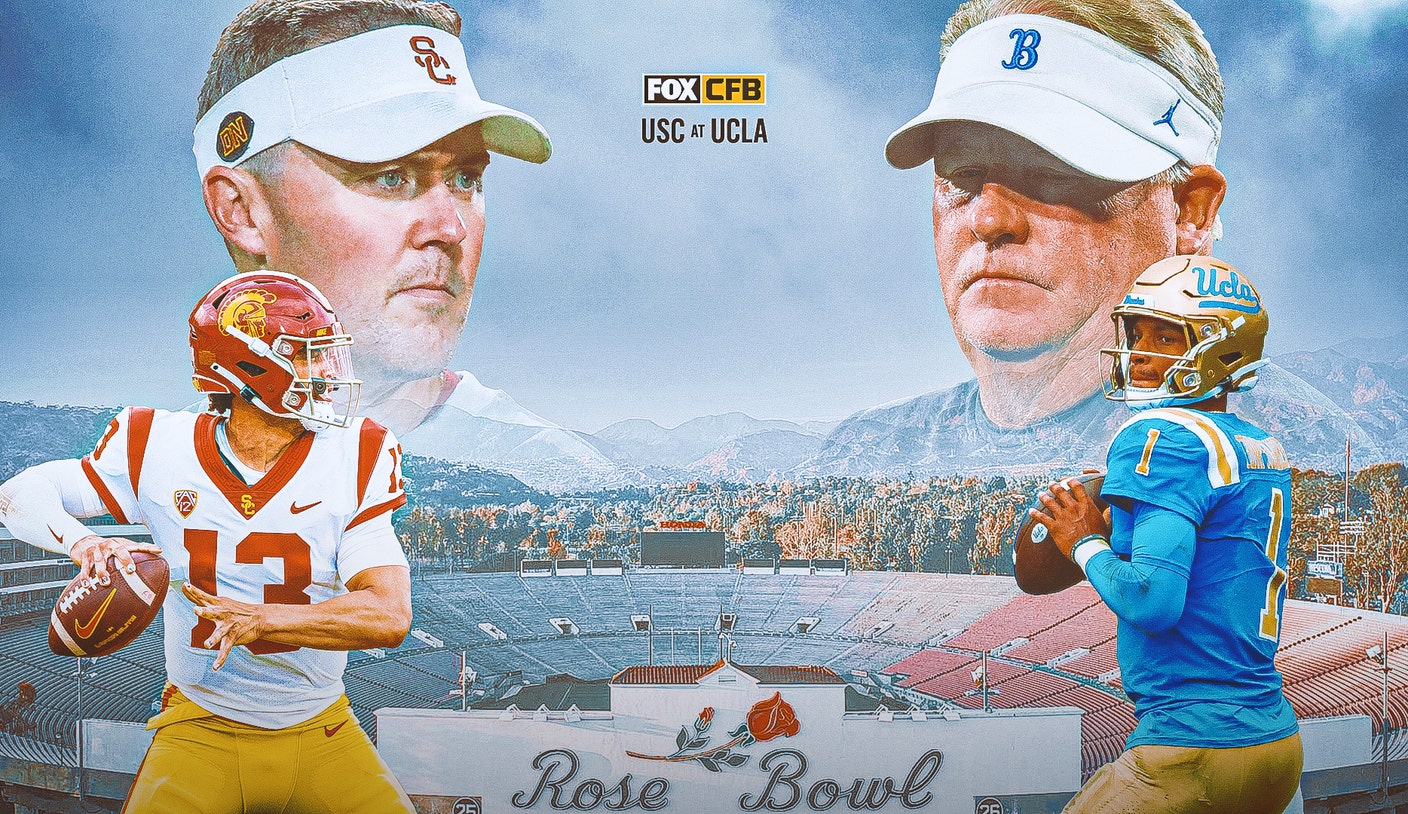 In football, getting from Point A to the end zone is rarely as simple as following a straight line.

When it comes to constructing a roster and reviving a historic college football program, even fewer things are linear in nature.

On Saturday evening, as No. 7 USC and No. 16 UCLA meet at the venerable Rose Bowl to contest their crosstown rivalry for the 92nd time (8 p.m. ET on FOX and the FOX Sports app), the two sidelines full of red and blue home jerseys will be filled with both established and newly-arrived Angelenos. There will be a mix of five stars and transfers, future pros and potential prognosticators.

Leading them into battle are two creative offensive geniuses, men tasked with defining this game as it transitions from a flagship contest on the West Coast to the western foil of ‘The Game’ in the future coast-to-coast rendition of the Big Ten. The head coaches, in differing ways, were brought in to win and win big.

More than that, they were brought in to make winning this game on Saturday a fait accompli — the precursor to conference titles, College Football Playoff berths, and, hopefully, even one of those golden cylinders at the end of the season.

Such were the expectations newcomer Lincoln Riley understood and embraced when he made the shocking move from one blue blood (Oklahoma) to another (USC) last fall. The Trojans’ new head coach is no stranger to hotly contested rivalries, but his first meeting with the Bruins carries that much more weight, as greatness is in play for a program that was 4-8 last season.

“The culture here will be team first. We will have a room of great athletes, yes, but they will be ones that care about winning championships, winning rings, holding up trophies, raising banners,” Riley said at his introductory news conference, just shy of one year ago. “The combination of that and a great staff is how you do it.”

He certainly has done it, guiding USC back to a place it hasn’t truly been since Pete Carroll roamed Heritage Hall. The team is off to its best start since 2008 and has a clear pathway to a semifinal appearance on New Year’s Eve.

RJ Young shares who he believes are the top five candidates to win the Coach of the Year Award, including TCU’s Sonny Dykes and USC’s Lincoln Riley.

It was what everybody expected to see for the cardinal and gold each November, even if things might be ahead of schedule by a year or two.

Standing in Riley’s way is somebody who has taken a far different path to title contention — UCLA’s Chip Kelly. He took the college football world by storm after taking the big chair at Oregon more than a decade ago, notching three straight conference championships. A brief sojourn to the NFL failed to live up to that kind of bar but did end up leading him back to the West Coast, where he felt at home despite his New England roots.

While Riley has found near instantaneous success on the field in L.A., Kelly has had to play the long game. UCLA failed to win more than four games each of his first three seasons in charge, and last season’s breakthrough 8-4 campaign was dampened by a COVID outbreak that cost the Bruins a chance at their first bowl game since 2017.

Still, it was a resounding success, after bringing the Victory Bell back to Westwood following a 62-33 romp over a lifeless USC team at the Coliseum. It was a masterclass from Kelly, leading an offense that had 11 plays of 20 yards or longer in putting up the most points ever scored against a Trojans defense.

It helps to call plays for a quarterback like Dorian Thompson-Robinson, of course. The fifth-year senior was Kelly’s first marquee recruit and has played a big part in the team’s rise, as his own game has elevated from decent as a young freshman to stellar as an upperclassman. The Bruins are currently fifth in the country in total offense and are the only team balanced enough to crack the 2,400-yard mark both rushing and passing. A big outing against USC, and they’re on track to be just the third team in school history to average more than 40 points per game, too.

Such video game numbers are not limited to the powder blues this season, though. Thompson-Robinson’s opposite number Caleb Williams has a real shot at making it to New York for the Heisman ceremony. He could use Saturday’s primetime spotlight to at least become a finalist, or even win the award. In just 10 games with the Trojans, Williams has accounted for 37 total touchdowns and is third in the country in passing. He has just two interceptions in 342 attempts, too.

Caleb Williams for the Heisman Trophy?

Is Caleb Williams worthy of a trip to New York for the Heisman Trophy ceremony? Reggie Bush and Matt Leinart discuss what makes Williams stand out.

After making magic with Riley as a freshman at Oklahoma, the way in which Williams has elevated his game in Los Angeles has been impressive. It’s also one of the chief reasons the team’s lone blemish is a one-point loss on the road to fellow top-10 side Utah.

Things will be a little different when he trots out onto the field against UCLA, however, as tailback Travis Dye won’t be sharing the backfield with him. The Oregon transfer returned home to Southern California following a coaching change up north and had become a key cog in the ground game, scoring a rushing touchdown in eight straight games prior to suffering a season-ending knee injury on Friday night against Colorado.

That passes the baton over to Austin Jones as the team’s lead back. He had 92 yards and two touchdowns during his last trip to the Rose Bowl to play UCLA, albeit with Stanford two years ago.

If it feels like every major player is getting a taste of this crosstown showdown after a previous stop elsewhere, you wouldn’t be too far off. Williams’ leading targets are from Pittsburgh (Jordan Addison), Oklahoma (Mario Williams), Memphis (Tahj Washington) and Colorado (Brenden Rice). Left tackle Bobby Haskins came over from Virginia, and leading tackler Shane Lee arrived from Alabama.

The story is much the same across town. Thompson-Robinson might spend his entire career in Westwood, but his top receiver Jake Bobo traveled across the country after starting out at Duke. UCLA’s best player might be running back Zach Charbonnet, who was a bit player at Michigan but has transformed into the third-leading rusher in the country with 1,145 yards and 13 touchdowns.

All told, 15 Bruins will get their first crack at the team located 14 miles from campus. Interestingly, one of them will be backup offensive lineman Liam Douglass, who made the trip down the 10 freeway after spending four seasons at USC. Starting defensive tackle Jay Toia has done the same.

Such ties between the two programs are not uncommon given the proximity and common recruiting base — and extend beyond those suiting up, too. Kelly added six new assistants to his full-time staff in 2022, and three of them once stood on the opposite sideline in this series wearing cardinal and gold. Offensive line coach Tim Drevno and defensive line coach Chad Kauha’aha’a both served under Clay Helton as recently as two years ago, while Ken Norton Jr., a UCLA legend as a player, won a national title with the Trojans under Carroll.

There might end up being one more, too, as Bruins defensive coordinator Bill McGovern has not been with the team the past three weeks while dealing with an illness. His replacement calling plays has been analyst Clancy Pendergast, who was the defensive coordinator across town under both Lane Kiffin and Helton.

The Trojans’ current coordinator, Alex Grinch, is no stranger to Kelly, either, as the two used to battle on a daily basis when they were together at New Hampshire in the early 2000s.

Of course, Grinch didn’t have the advantage of a player like Tuli Tuipulotu at his disposal back in the day. The star defensive lineman posted 2.5 sacks, three tackles and a forced fumble against Colorado last time out and is in line to become the latest All-American on the wall of legends that lines the tunnel on the way from the Trojans’ locker room to their practice fields.

The junior, who grew up about 25 minutes away from each campus in Hawthorne, was one of just three USC starters with bitter memories from last year’s rout by their rivals. Tuipulotu is aiming for a much different result this time around and comes into the contest on a tear, with an FBS-high 11.5 sacks (just five away from the school record).

As if the stakes of such a rivalry involving two teams in the same city weren’t enough, there’s real hardware beyond ringing the Victory Bell at stake. The Trojans are the Pac-12’s highest-ranked team in the College Football Playoff rankings and would be a near lock to make it to the final four if they win out. Victory against UCLA would at least secure a trip to Las Vegas for the Pac-12 Championship Game, one of their last chances at playing for a conference title in their soon-to-be former home.

The Bruins are in the same boat, playing for the same berth. It’s less simple than winning to get in, but a loss would eliminate them from a trip to Sin City.

Having it all on the line has been a bit of a rare occurrence in the series either way, as this will be the first time since 2014 that each side is ranked.

This may not be a rivalry as ferocious as Ohio State-Michigan, as bitter as the Iron Bowl, or even have quite the proximity of Duke-North Carolina, but it does have every bit of the animosity and detestation one would expect. Throw in what’s in jeopardy for both the winner and the loser, and that’s especially the case this time around for both USC and UCLA.

All of this should combine for an eclectic atmosphere at the sold-out Rose Bowl on Saturday. It’s been a winding — and at times unclear — path to Pasadena for the Bruins and Trojans alike, but they’ll have 60 minutes to prove it was all worth it.

Bryan Fischer is a college football writer for FOX Sports. He has been covering college athletics for nearly two decades at outlets such as NBC Sports, CBS Sports, Yahoo! Sports and NFL.com among others. Follow him on Twitter at @BryanDFischer.

News Next Desk - November 29, 2022 0
Sandra Torres, mother of the Uvalde shooting victim took legal action against the gun distributors and the local governments by filing a lawsuit. She also...
%d bloggers like this: