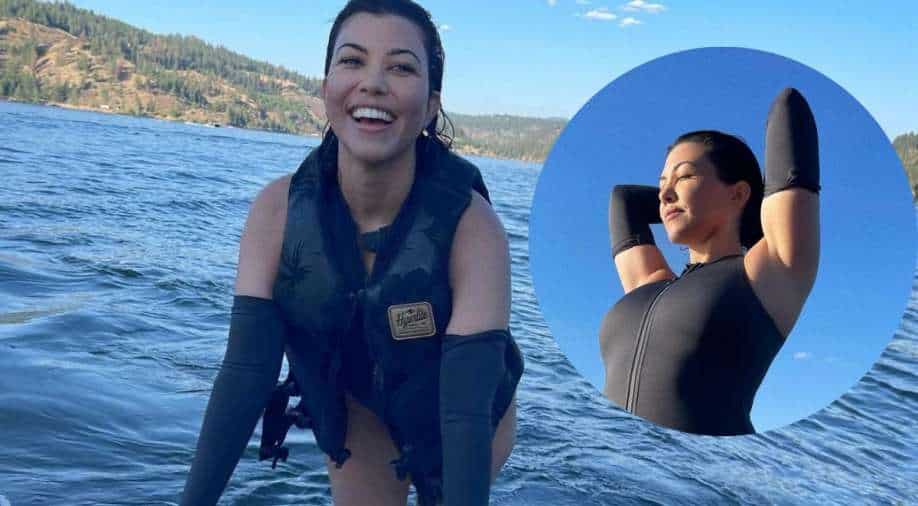 The eldest Kardashian of the three Kardashian sisters, Kourtney, 43, is making waves on the internet for her latest lakeside pictures. In the viral snaps, she is seen donning a black monokini with a pair of matching swim gloves. And, everyone is talking about her elbow-length hand covers that are quite unique for the swimwear market.

Last month, Kim’s new Skims Swim drop also included swim gloves in seven different colours. This added another category of accessories to swimwear. While swim gloves aren’t a new concept, they were usually used by people who had skin conditions or who wanted to keep their hands warm in cold water. While some gloves helped swimmers swim faster. But, it seems that Kim just wanted her gloves to be a fashion accessory since they do not have pads or webbed fingers.

On Kim’s SKIMS website, the swim gloves are available in 9 different sizes and 7 different shades. They retail for $48 for a pair.

While sharing the two pictures, Kourtney shared that she loves “lake life” through her caption. Take a look!

Do we really need swim gloves? This is the question several netizens are asking on social media. One user wrote, “What’s with the gloves … not even when I water ski gloves are worn esp in summer… must be a fashion thingy. (sic)” Another tweeted, “Can you explain the gloves?” Meanwhile, one netizen said, “Nobody going to talk about the fact that she’s wearing arm length gloves while swimming. (sic)” On contrary, some netizens are in love with the gloves. One user shared, “Okay, so the gloves aren’t a usual thing but I love it. (sic)” Another wrote, “Love those gloves!”

The internet is certainly divided over the swim gloves debate!

Reports of Kourtney expecting another child have been doing rounds online for the last couple of days. The speculations began when some fans spotted what they thought was a baby bump at the Oscars’ red carpet. Lately, the business mogul has been wearing loose clothes and this is adding up to the speculations. Whether or not the diva is expecting will only be known once the official confirmation comes. Till then fans can just speculate and gossip.

In the first season of ‘The Kardashians’, we saw how hard Kourtney and Travis were working to get pregnant. However, even after several trials, the TV personality was not able to conceive. This left the couple really sad and heartbroken. So, if rumours are true, we are sure the Kardashian family will be on cloud nine now.