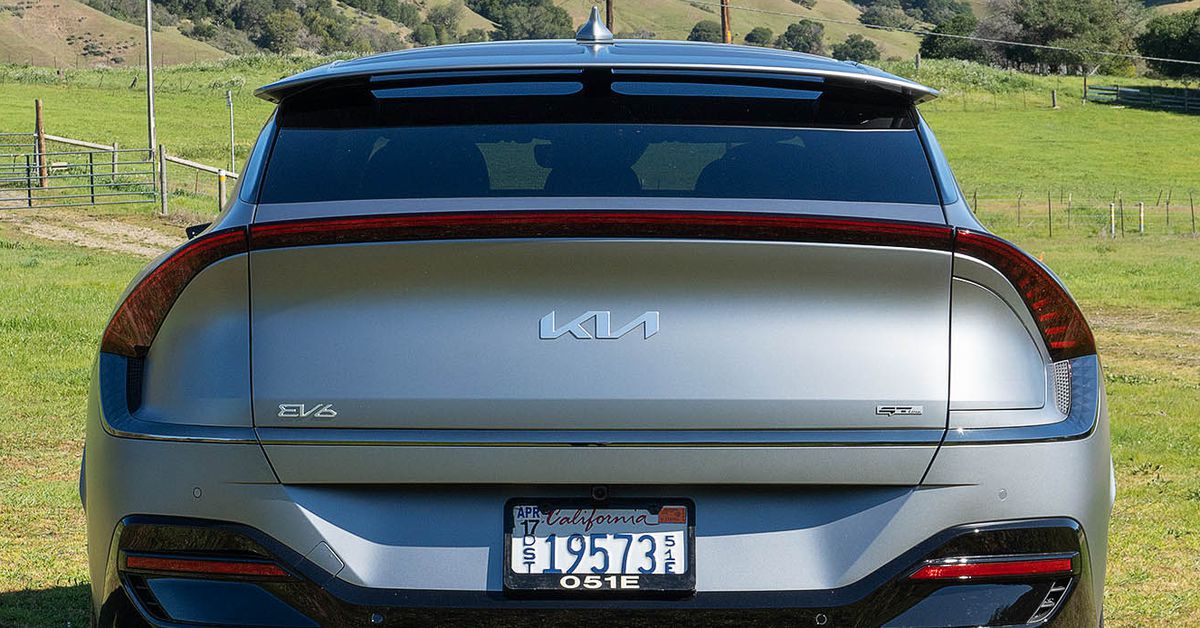 When I see the relatively new Kia logo, which is just the brand’s name but in an extremely angular, scrunched-up font with a seemingly connected “I” and middle line-less “A,” the first thing that comes to mind is “wow, that makes sense on a state-of-the-art EV but feels laughably out-of-place on this minivan.” But apparently, there are many, many people whose reaction is more along the lines of “wait… what does that say?”

Each month, there are around 30,000 web searches for “KN car,” according to data posted by ad agency owner Ashwinn Krishnaswamy on Twitter. The spike in searches — which seems to come from people trying to figure out if they’d missed the launch of an entirely new car company — started early last year, right around the time that vehicles with the new logo would’ve been hitting the streets, according to The Drive. That data also shows that other popular searches, with thousands of hits per month, include “kn car brand,” “kn car logo,” and “kn carnival car” (“Carnival” is Kia’s name for the minivan I referenced earlier). I also have some anecdotal experience to back the data up: when I brought this story up in Slack, four Verge staffers noted that they had also wondered who “KN” was.

It’s hard to blame people for being confused by the new logo; Kia’s not a tiny brand, to be sure, but it’s also probably not a company most people would think of when trying to puzzle out what car they’re looking at. And the hyper-modern, joined-up lettering of its new logo probably doesn’t help matters, especially when it adorns — no offense — a sedan, SUV, or crossover with a very bog-standard design. A Sorento or Telluride passing you on the highway looks entirely unremarkable until you catch a glimpse at the Kia logo and go, “Wait, what does that say?”

The Kia confusion isn’t a new phenomenon — Creative Bloq wrote about people being confused by the new logo almost a year and a half ago. (It’s also worth noting that some car logos have always been confusing — Ford’s screams the company’s name at you, but how do you Google the Mercedes, Mazda, or Subaru logo?) However, while the tweets confusing it with the Nine Inch Nails logo are certainly funny, the statistics take the comedy to a new level by giving us data on just how many people are getting this mixed up.

Kia didn’t immediately reply to The Verge’s request for comment on the confusion.

The good news for those confused is that Google is able to point them in the right direction; the top result for “KN car” is Kia’s website — or at least it was before it got covered up by Google’s “helpful” news, “People also ask,” and image results boxes (though those might go away at any time, search results are very fluid these days).

When The Drive tried searching “KN car” on other search engines, DuckDuckGo and Bing didn’t do great. When I tried it, the two search engines still don’t surface Kia’s website that well; the former only has one link to the automaker’s site on its first page of results (strangely enough, it’s specifically pointing people toward the page for the Niro), and the latter doesn’t have any (lol, Bing). However, they do surface all the articles that have been written about the confusion, which should get people on the right track.

In my opinion, the real victim in all of this is K&N car parts, a brand some people may be familiar with if they’ve spent any time in the air / oil filter section of an auto parts store. For now, its site ranks decently high in the “KN car” search results, but one small overcorrection from Google could bury it. It’s your time to shine, Wix Filters (a brand that surely hasn’t had to deal with any SEO problems of its own).

PS: To add a bit of context, yes, 30,000 searches for “KN car” is a lot, but according to Google Trends, it’s barely notable compared to the number of people searching for “Kia.”

Mike Vrabel has more power than ever with the Titans. It comes with pressure

Mike Vrabel has more power than ever with the Titans. It...

News Next Desk - December 8, 2022 0
Ben Arthur AFC South Reporter After the firing of general manager Jon Robinson, one of the most seismic moves in...

Now Telegram users don’t need a phone number — they can...

News Next Desk - December 8, 2022 0
Users had been required to use their mobile phone number to sign up for Telegram, similar to other end-to-end encrypted messaging apps like Signal...

News Next Desk - December 8, 2022 0
Will Collar's hat-trick for League Two Stockport County knocked out managerless League One side Charlton Athletic in their FA Cup second-round replay.Charlton, who sacked...

News Next Desk - December 8, 2022 0
Sam Panayotovich FOX Sports Betting Analyst Much has been made about the Minnesota Vikings (10-2) being an underdog on the...
%d bloggers like this: