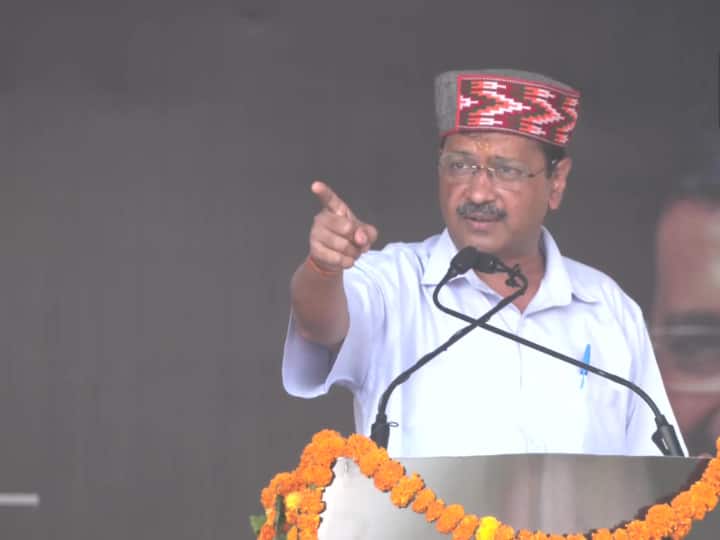 New Delhi: Himachal Pradesh will have the Assembly Election by the end of this year, hence, the political stir in the state has begun. The National Convenor of Aam Aadmi Party (AAP) and Delhi Chief Minister Arvind Kejriwal reached Kangra on Saturday. He addressed a public meeting here at Chambi in the Kangra district. He spoke about the beauty of Himachal Pradesh and further about the Congress party and the BJP.

He said, “When God was making the world, he made Himachal Pradesh the most beautiful place in the whole world. God has given Himachal a lot. He has given mountains, water, herbs and wonderful people, but BJP and Congress looted Himachal Pradesh. The Congress party ruled for 30 years, and then BJP ruled for 17 years and looted the state.”

It is time to make ‘Naya Himachal Pradesh’. I urge all the good people in BJP & Congress to leave their parties and join the Aam Aadmi Party. I request the people of this state to give AAP a chance: AAP national convenor and Delhi CM Arvind Kejriwal in Kangra pic.twitter.com/1y40ULaDZX

Arvind Kejriwal said, “We have ended corruption in Delhi, started doorstep delivery, gave a number 1076 to everyone, on this the people sitting at home get their work done.”
Addressing a public meeting in Kangra, Kejriwal said, “We started a pilgrimage for the elderly of Delhi, AC facilities are provided free of cost, only we can do this, the rest eat money.”

He said, “Our government was formed in Punjab, completely eradicated corruption and made 300 units of electricity free.”
He added, “In Delhi, we have given employment to 12 children in the last 5 years. If we will give jobs to 20 lakh people in the coming 5 years, then the people of Himachal also need it daily, right?”

BJP president JP Nadda will be on a two-day visit to Himachal Pradesh from Friday during which he will attend a number of public programmes, including a roadshow and a rally.

Himachal Pradesh | I have heard that they (BJP) will hold early Assembly elections in Himachal Pradesh and Gujarat: AAP national convenor and Delhi CM Arvind Kejriwal in Kangra pic.twitter.com/nIXzFyR1g6

Party’s chief spokesperson Anil Baluni said Nadda will conduct a roadshow in Nagrota Bagwan and later address a rally there on Friday. Nadda’s trip will be confined to Kangra, the state’s most important district politically. The BJP is in power in the state where the Congress is its main opposition, with the Aam Aadmi party also flexing its muscles following its impressive poll win in neighbouring Punjab.