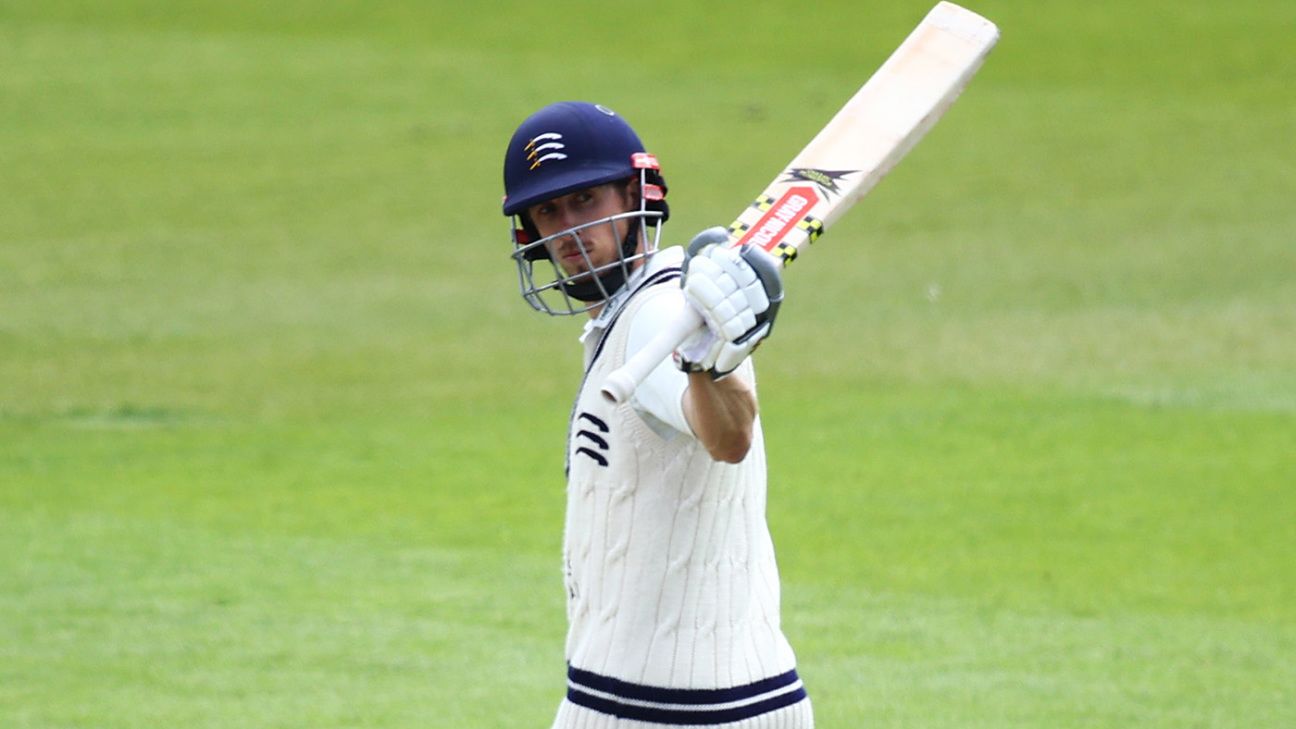 Middlesex took a stranglehold on their LV= Insurance County Championship match against Glamorgan in Cardiff as the home side finished 104 for 6 in their second innings, still 110 runs behind.

An undefeated John Simpson hundred and a fifty from Toby Roland-Jones meant that Middlesex made 336 all out to give them a 214-run lead on first innings.

James Harris finished with the best bowling figures for Glamorgan, claiming 4 for 68 against his former county.

When it was Glamorgan’s turn to bat things unfolded much as they had in their first innings with the top order failing once again in the face of some excellent Middlesex bowling.

Simpson batted brilliantly with the tail as Middlesex added 226 runs for their last four wickets. The pitch had looked very lively on day one of this match but had flattened out some as day two wore on. The Glamorgan bowlers struggled to keep things tight as Simpson and the tailenders took the game away from them.

Roland-Jones reached his fifty from 62 balls as he continued to attack the Glamorgan bowlers at the start of day two. When he was dismissed by Harris for 62 his partnership with Simpson was worth 103.

The punishment didn’t end for Glamorgan when Roland-Jones departed as first Tom Helm and then Shaheen Shah Afridi continued to plunder runs. Afridi made a career-best 29 in what is becoming a Middlesex debut to remember.
To sum up how badly things went for Glamorgan with the ball, the three highest partnerships of this match so far have been for the seventh, eighth and ninth Middlesex wickets. The Glamorgan seamers toiled away fruitlessly and it was left to Marnus Labuschagne to finish off the Middlesex innings, claiming the last two wickets with his leg breaks.

Glamorgan started brightly enough with David Lloyd looking to be positive but when both he and Andrew Salter were bowled in quick succession it had a very similar feel to the home side’s disappointing first innings.

Labuschagne was driving brilliantly as he caressed five balls to the boundary, but as in the first innings it was Afridi who had his measure, a fuller ball trapping the Australian lbw for 23.

Kiran Carson, Chris Cooke and Callum Taylor all went in the space of nine runs to leave Glamorgan 78 for 6 and in danger of losing the game inside two days. A partnership worth 26 between Sam Northeast and Michael Neser took Glamorgan passt three figures and the game into a third day, but there is a lot of work to do on Saturday to try and prevent anything other than a heavy defeat.

While there have been some poor shots, credit must be given to the Middlesex bowlers who were once again consistent and incisive, they and Simpson have put their side in a brilliant position.