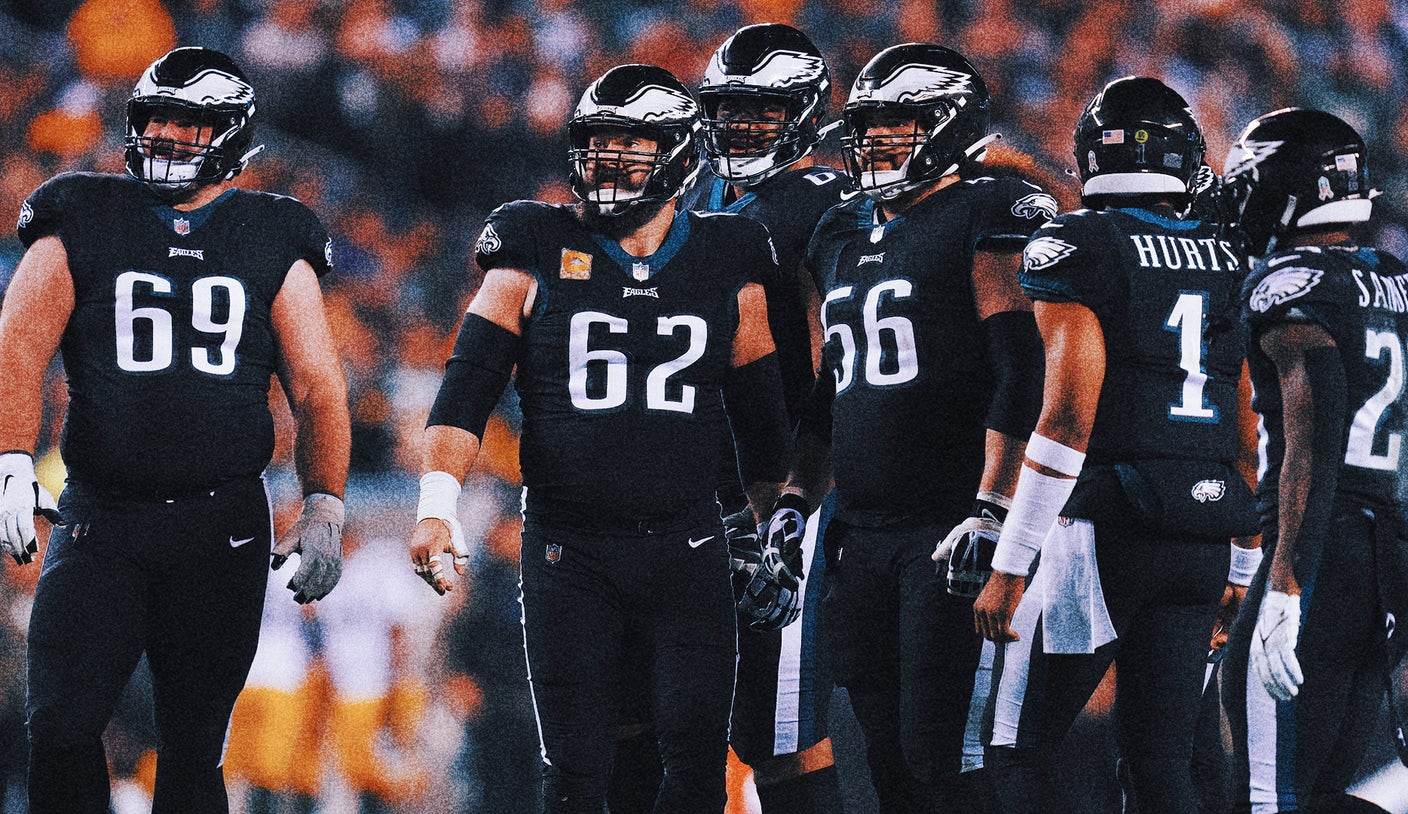 The burly, bearded men belting out holiday classics have made the night before Christmas more than just a time this year to watch the Philadelphia Eagles try and slay the competition.

Lane Johnson, Jason Kelce and Jordan Mailata — with a little assist from some melodic teammates — have made a season already pretty jolly in Philly a bit more sweet-sounding with the release of their Christmas album, “A Philly Special Christmas.”

Yes, the album title is an ode to Old Saint Nick, in this case former quarterback Nick Foles and the trick play that helped the Eagles win their only Super Bowl in the 2017 season.

The trio of Eagles offensive lineman can sing about as well as they can pass protect — Johnson might not even let Santa Claus down the chimney as he holds the record for most consecutive games without allowing a sack — and an All-Star cast of musicians was assembled to record the album.

Joy Taylor believes the Eagles are the most dangerous team in the NFC because their offense is explosive and consistent.

Leading the charge was Charlie Hall, drummer for the Grammy-winning band War on Drugs.

“If we’re going to do this, let’s make it meaningful. Let’s make it awesome,” Hall said. “It’s not a goof.”

While the tone is light, this is no novelty record.

“Oh, football players making a record, it’s like ‘Super Bowl Shuffle,’” Hall said with a laugh. “But no, this was born out of sincerity and a deep love and appreciation of music.”

The cover art features Johnson, Kelce and Mailata sketched in an homage to the Peanuts characters on the “A Charlie Brown Christmas” album and the songs are standards found on Christmas playlists.

“I did not think it was going to get to this level of quality,” Kelce said.

On the field, the Eagles play the Dallas Cowboys on Dec. 24.

There’s a philanthropical slant to the album as well, with proceeds going to the Children’s Crisis Treatment Center in Philadelphia. More than $100,000 has already been raised.

Good luck buying the album, though.

Well, at least a vinyl copy, as previous pressings have quickly sold out. The last batch sold out in 120 seconds — some albums are going for $4,000 on eBay — and there’s one final order available on Friday. “A Philly Special Christmas” is of course available on streaming services and one song a week has been dropped each Friday leading to the full record’s release on Dec. 23.

The idea for an album was kicked around last year by Kelce and friends around last Christmas, and former Eagle Connor Barwin used his music connections — War on Drugs have headlined the former defensive end’s charity show — to get the ball rolling. The album was recorded over several days at various Philadelphia-area studios this past summer.

Related: Should you take the Bears to cover against NFL-best Eagles?

The recording team brought in a vocal coach to assist the Eagles as they made the transition from the huddle to the studio.

“That was the lesson in all this, just being game for something,” Hall said. “They’re like, ‘yeah, show me what to do. Show me how to be better and I’ll do it.’ Just totally coachable.”

Kelce, who dressed as a Mummer during the Super Bowl parade and sang the national anthem at a 76ers game last season, channeled his inner Bruce Springsteen for the classic “Santa Claus is Coming to Town.”

Kelce bursts into laughter when the 25-year-old Mailata hits all the high notes of falsetto on the “I-I-I am dreaming of a white Christmas” doo-wop part popularized by The Drifters.

Jordan Mailata speaks out: Micah Parsons “should worry” about Cowboys

James Jones joins Emmanuel Acho, Joy Taylor, and Dave Helman on Speak to discuss the rivalry between the Philadelphia Eagles and the Dallas Cowboys.

Mailata has the best pipes of the bunch and even competed on the FOX reality show “The Masked Singer.”

“Jordan could straight up quit football and be a singer if he wanted to,” Hall said. “But they’re all great. Their voices are like a reflection of their personalities. Lane has this incredibly soulful voice. If they were to get out of this line of business, Jordan would have no trouble finding a gig singing.”

Hall already felt the holiday spirit with the War on Drugs set to play three sold-out “Drugcember To Remember” charity shows next week at the Philly rock venue Johnny Brenda’s. The money raised goes toward The Fund for the School District of Philadelphia, a nonprofit that raises and coordinates investments into the Philadelphia public schools.

War on Drugs had just won a Grammy and were on tour in Australia in February 2018 when the Eagles beat the New England Patriots in the Super Bowl.

“It was like 10 in the morning and we all crammed into a hotel room and were screaming and throwing chairs out of excitement,” Hall said.

“It’s sort of a beautiful reminder that we’re all just connected through life and music and friendship,” Hall said.

Reporting by The Associated Press.

Clash at the Coliseum: NASCAR returns to L.A. to open 2023 season

YouTube’s Go Live Together lets you co-host a livestream – but...

Budget 2023: A capex shot for inclusive, green growth in India

News Next Desk - February 4, 2023 0
The finance minister Nirmala Sitharaman has yet again laid out a prudent, inclusive and growth-oriented budget that lays the groundwork for India's long-term growth...

News Next Desk - February 4, 2023 0
Union Minister for Communications, Electronics, and Information Technology on Friday informed Rajya Sabha in a written reply that 50 government websites have been hacked...
%d bloggers like this: