Home Sports James Anderson: ‘I feel proud of the work I’ve put in over... 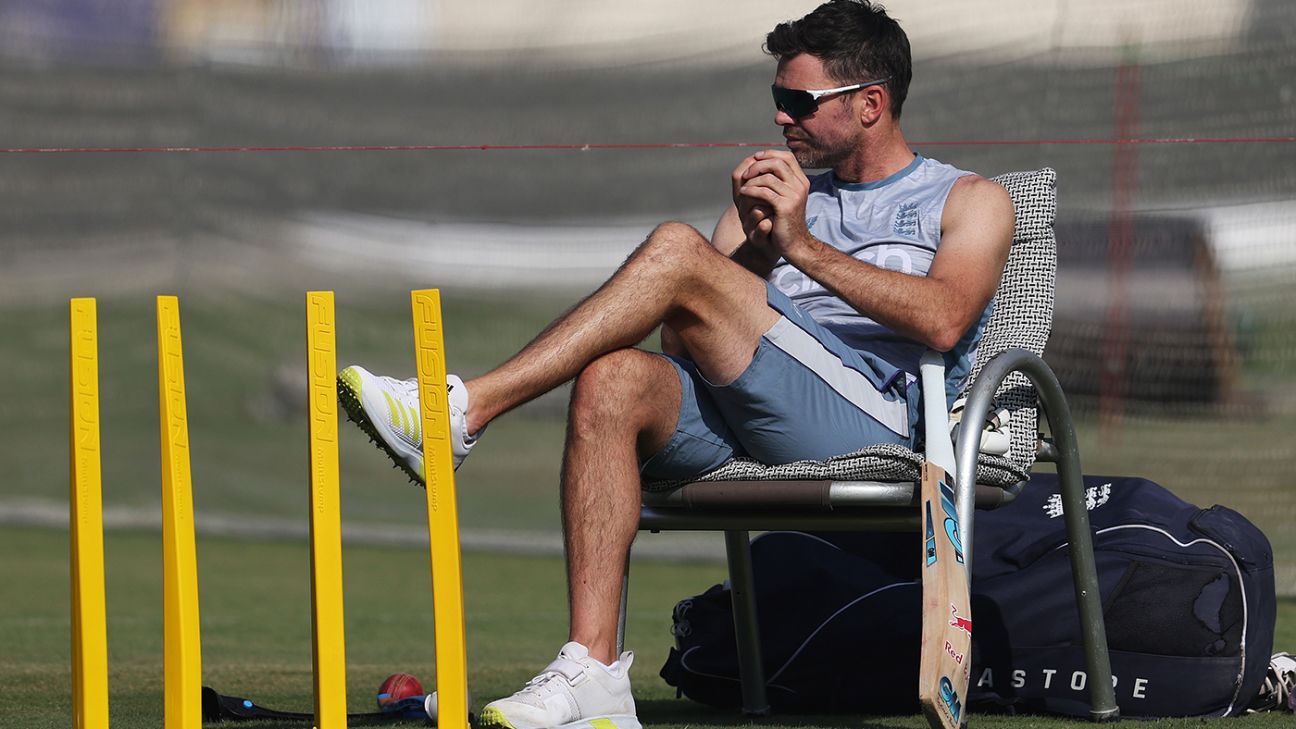 At 40 years of age and with 177 caps, missing Test matches is not something James Anderson has time for. Yet as he sits in Karachi’s Movenpick hotel on Friday, a day out from the third and final Test against Pakistan, he is at peace with the fact he is sitting this one out.
The series is won, with only the scoreline left to sort. Anderson’s eight wickets at 18.50 have ticked off a ninth frontier in the format, 17 years after he accompanied England on their last tour to the region without getting on the park (for the Tests). The career dismissals were 35 then, 675 now as Anderson’s 20th year as an international comes to an end. Nevertheless, his rest has been well-earned.

“It’s been brilliant from start to finish really,” Anderson says. “I think we’ve just really gone about things the right way, we’ve worked really hard concentrating on the right things. We wanted to keep that same mentality we had in the summer, the same style of cricket.

“We knew it was going to be slightly different out here. Just from one to 11 it’s been outstanding. Everyone’s chipped in, whether it’s with runs or wickets in the field, and we deserve to be two-nil up.”

That Anderson “completely understands” the reasons for being rested is as much personal contentment as it is the environment he is in. He felt he could have played, and said as much to Ben Stokes. The captain, however, was thinking further ahead. “It’s only four or five weeks before we go to New Zealand,” says Anderson of the two-Test series in February. “It’s not a huge amount of time.”

What the break does do is give Anderson scope to assess how the last couple of weeks have been on a personal level. It speaks volumes that he regards the job done here as the most satisfying of his career.

“I feel proud of the work I’ve put in over here: forty overs [46] in the first Test, 22 I think on the last day of the game. That’s as good as I’ve bowled and as important a role as I’ve played in any team, I think, especially in these conditions.

“And I think to be honest, we all feel like that as bowlers. The seamers have put in a lot of work to try and get something out of the wickets.

“We’ve managed to find some reverse swing which helps. But I think generally we have just thought outside the box with fields as well. Just trying everything we can to get 20 wickets and thankfully we’ve managed to do it in both games.”

More specifically, there is pride at the delivery in Multan that did for Mohammed Rizwan: moving in with that reverse, then nipping away and clipping the top of off stump. The video of that dismissal is still doing laps on social media. Many used it as an excuse to trawl through Anderson’s archives to compare it to other pearlers. The man himself is certain it is one of the best deliveries to have left his hand.

“I think it probably is up there, just because of where I’ve done it. I’ve bowled similar deliveries in England where you get that seam movement. And it happens more regularly than it does in Pakistan.

“So to get that little bit of reverse swing in and it definitely hit a crack, but it looks great on telly. For me it’s right up there with one of the best balls I’ve bowled.”

“I love thinking about the game, thinking about plans, and Ben is that sort of captain. All he thinks about is taking wickets. He’s not bothered about trying to dry the run rate up or control the game. He wants to take wickets”

“I guess that’s part of the skill out here when you know certainly towards the back end of the game the wicket might break up. The wicket out here looks exactly the same – there are going to be cracks there as the game goes on and it deteriorates. And the skill for the bowlers then is to hit it as often as you possibly can. [It’s] not always that easy just to land it on it. That’s the thing: you’ve got to bowl it with some decent heat on, you can’t just put it there or bowl within yourself. You’ve got to mean every ball. It can take its toll, but it’s really satisfying when you get those rewards.”

In many ways, it is remarkable Anderson finishes 2022 with 36 wickets at an average of 19.80, the first time the latter has been under 20 in a calendar year since 2017. The spillover of the Ashes and the end of Chris Silverwood’s tenure as head coach was such that Anderson and Stuart Broad were omitted from the tour of the Caribbean, which was Joe Root’s last engagement as Test captain.

But it is clear Anderson is enjoying a new lease of life under his eighth full-time Test captain. He is currently the leading wicket-taker under Stokes, a statistic which has a very clear correlation to the manner in which the captain and new head coach, Brendon McCullum, are approaching things on the field.

The batting may grab the headlines, but the bowling has been a model of consistency through relentless pressure, administered through attacking fields with accompanying lines and lengths. England have taken 10 wickets in all 17 innings so far under Stokes and McCullum through this approach, something which aligns with Anderson’s own theories while also opening his eyes to doing this a different way.

“I love thinking about the game, thinking about plans, and Ben is that sort of captain. All he thinks about is taking wickets. He’s not bothered about trying to dry the run rate up or control the game. He wants to take wickets. You see that with the fields he sets. That then rubs off on you as a bowler.

“I can’t remember the amount of times I would have bowled in previous years with a leg slip. I had one quite a lot throughout the summer, had one quite a lot in this series. Funnily enough, that Rizwan wicket, I did have a leg slip in at the time and Rooty thinks maybe that position made him stay slightly leg side of the ball. Those little things can actually make a big difference.

“When we were successful in 2010, it was a run-rate thing, control the rate, and it worked for that group of players. We did that again in ’17, ’18, ’19, it didn’t quite work for us. This seems to be working for this group of bowlers, and we’ve got a nice mix of bowlers, especially with Woody [Mark Wood] coming back in. So I’ve found it refreshing thinking differently, even though I’ve played a lot of games.

“As long as you’re getting hit in the right areas, they don’t care if you go for the odd four, trying to go a bit fuller, so that gives you confidence to bowl, knowing that you don’t have to fret about how many runs you’re going for, or whether you’ve been hit twice down the ground. If that’s the way you’re trying to get people out, with catchers in front of the wicket as they have been out here, then they’re completely fine with it.”

As for where things go from here, the spectre of Australia and a home Ashes looms large. Given the constant calls from within the group to play more engaging, more entertaining cricket and push past the previous achievements, predicting where this side will be by next summer is anyone’s guess. “I’m sure over the coming months the messages will be the same,” Anderson says. “With the talent we have got, we should just keep getting better so that by the time the Ashes does come around, we’ll be in a good place.”

Given how accustomed he is with Australia ahead of what will be his 10th series against them, there is maybe no better person to ask. Does he think Australia will be intimidated of this free-wheeling juggernaut fuelled by vibes and a relentless approach to positive results?

“It’s an interesting one,” he muses. “I texted Tim Southee the other day to congratulate him on the NZ captaincy and he was like ‘I’m not sure I can keep up with you guys’.

“Maybe the Aussies might be more brash than him but there might be something deep down, where they’re not sure how they’re going to approach it against us. Having played against them a lot, I’m sure they’ll try to come back just as hard as they can. It seems a long way away at the minute, but hopefully we can keep enjoying ourselves and keep playing the way we are because it’s a lot of fun to be a part of.”