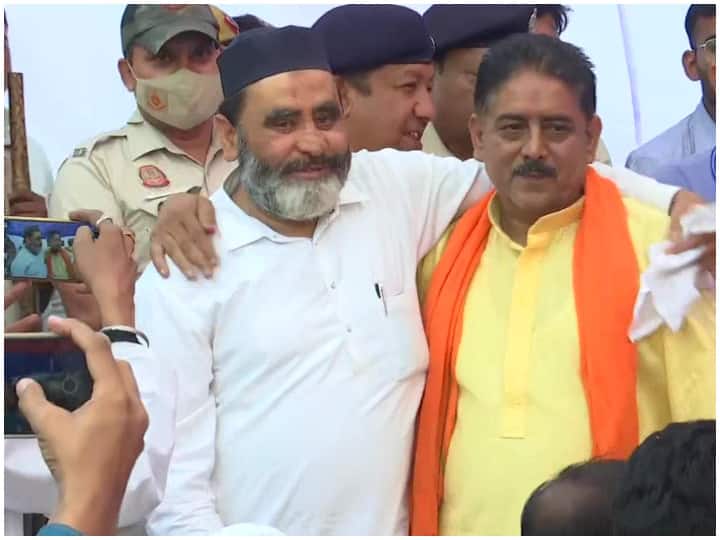 New Delhi: Members of the local peace committee in Jahangirpuri’s C-Block on Friday urged for peace and unity in the neighbourhood, as residents from two groups hugged each other and resolved that such occurrences would not happen again, news agency PTI reported.

Locals present at a news conference at Kushal Chowk said they will do a ‘Tiranga Yatra’ in the region on Sunday to symbolise togetherness.

A member of the Muslim community, Tabrez Khan, said, “We want to live in harmony. We will ensure such incidents are not repeated. We request the police to reduce force and barricading.”

“This (violence) incident is really concerning. Please do not believe in rumours. Communal clashes have happened here for the first time. We must ensure they are not repeated,” a representative of the Hindu community and Resident Welfare Association president Inder Mani Tiwari was quoted by PTI in its report.

He praised the actions of the police in dealing with the situation and avoiding the conflicts from worsening.

“ It was a confidence-building measure. All are staying unitedly. Hindus and Muslims have lived like brothers in this country and will continue to do so. We’re scaling down security arrangements,” she was quoted by ANI on its official Twitter handle.

Delhi | It was a confidence-building measure. All are staying unitedly. Hindus and Muslims have lived like brothers in this country and will continue to do so. We’re scaling down security arrangements: DCP North West Usha Rangnani on the Sadbhavna meeting in the Jahangirpuri area pic.twitter.com/19cGbEk0nC

“I am happy. Peaceful existence between two communities must remain. I have never stopped shops in H and G blocks from opening. I don’t know why these shops are closed. We will facilitate the opening of shops and businesses to open in these blocks,” the DCP said.