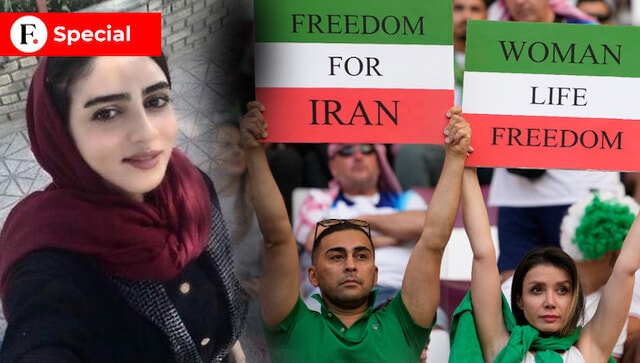 Sahar Khodayari (R) self-immolated outside a court in Tehran on 2 September 2022 & Iranian fans at the FIFA World Cup in Doha Qatar on 21 November 2022. Twitter/@AlinejadMasih, AP

On 9 September 2019, 29-year-old Sahar Khodayari died of burn injuries a week after she immolated herself outside an Islamic Revolutionary Court in the Iranian capital of Tehran.

A short while before the self-immolation, the court told Khodayari that she may be sentenced to six months in prison.

Disguised as a man, Khodayari had entered the Azadi Stadium in Tehran to attend the match in March 2019 but she was caught by the security guards and arrested. Khodayari who became a symbol of protest in her country was dubbed the ‘blue girl’ after the colours of her Esteghlal FC.

1-These are the pictures of Sahar Khodayari, aka #BlueGirl, who set herself on fire last year because authorities had arrested her for simply entering a stadium.

Sahar was full of life & joy. All she wanted was to cheer for her team. The regime in Iran was bothered by her joy. https://t.co/6njMQZN6WD

Her self-immolation and subsequent death sparked outrage both at home and abroad with FIFA mounting pressure on Iran to allow women to enter stadiums.

“We learnt of some very sad news from Iran and deeply regret this tragedy. FIFA conveys its condolences to the family and friends of Sahar. We reiterate our calls on Iranian authorities to ensure the freedom and safety of any women engaged in the legitimate fight to end the stadium ban,” FIFA tweeted.

We learnt of some very sad news from Iran and deeply regret this tragedy. FIFA conveys its condolences to the family and friends of Sahar. We reiterate our calls on Iranian authorities to ensure freedom and safety of any women engaged in legitimate fight to end stadium ban. pic.twitter.com/h0svqFq8uX

Popular football club Barcelona said that they were very sorry to hear about Khodayari’s death and that “football is a game for everyone – men AND women, and everyone should be able to enjoy the beautiful game together in stadiums.”

FC Barcelona is very sorry to hear about the death of Sahar Khodayari, may she rest in peace. Football is a game for everyone – men AND women, and everyone should be able to enjoy the beautiful game together in stadiums. https://t.co/icR4jIIa68

Under pressure from FIFA, Iran allowed over 2,000 female spectators to watch the Iranian national football team defeat Iraq in the World Cup Qualifiers in Tehran.

However, in March 2022, it was reported that women were barred from attending the Iran-Lebanon WC qualifiers in Tehran.

To date, Iran has not lifted the stadium ban on women.

The ongoing FIFA World Cup coincides with nationwide protests in Iran which started after 22-year-old Mahsa Amini died following her arrest by the morality police.

On 22 November in their opening match which was against England, the Iranian football team refused to sing their country’s national anthem in an apparent show of support for the protests.

While the gesture won praise globally, not all fans were impressed. Demonstrators and activists had earlier slammed the football team for posing with Iranian president Ebrahim Raisi before leaving for the World Cup.

Many Iranian fans have been divided over whether or not to support their team.

“The protest movement has overshadowed football. I want Iran to lose these three games,” AP quoted Kamran, a linguistics professor as saying.

As for the Iranian players, some of them have been vocal in favour of the protests on social media.

One of them Sardar Azmoun- a star performer, was on the bench during the match.

China unwilling to allow ‘effective’ foreign COVID vaccine despite the protests: US

Malaika Arora gives a befitting reply to trolls; says, ‘I have moved on, when the

News Next Desk - December 4, 2022 0
Retaliating to a rocket fired from the Palestinian enclave towards its territory, Israel on Sunday reported that it had carried out overnight air strikes...

Suvendu Adhikari And Abhishek Banerjee Show Their Might In West Bengal...

News Next Desk - December 4, 2022 0
Ahead of panchayat polls in West Bengal, the political ground of the state is heating up with BJP and TMC showing their might. BJP’s...