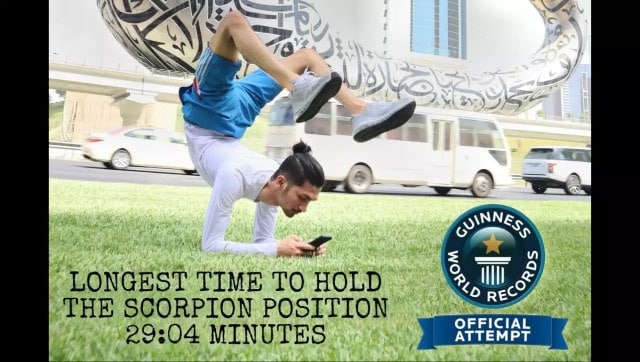 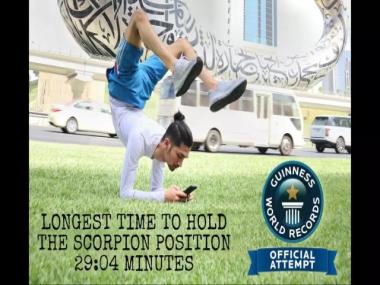 In the video, the 22-year-old also states his efforts made him realise that energy actually comes from belief and self-confidence rather than muscular arms.

An Indian ex-pat in Dubai broke the Guinness World Record for holding the scorpion or Vrischikasana pose for the longest time. Yash Mansukhbhai Moradiya held the upside-down pose for 29 minutes and four seconds, smashing the previous record of four minutes and 47 seconds.

The 22-year-old, who works as a yoga teacher in Dubai said that his aim behind achieving the feat was to create more awareness about yoga, as per Khaleej Times.

According to Mordiya, he had been working hard for five years to attain this milestone. The yoga teacher successfully attempted the record on 22 February this year.

In the video, the 22-year-old also states his efforts made him realise that energy actually comes from belief and self-confidence rather than muscular arms. He also revealed how difficult it was for him to hold the scorpion pose after a while, but it was his mental strength that helped him move past the pain and exhaustion he was feeling.

According to Mordiya, yoga has the power to make people separate themselves from their pain and unlock their true potential.

In an interview with Khaleej Times, the 22-year-old said that the scorpion pose “is all about stability. The longer we hold the pose, the better we learn to establish the mental resilience to survive any critical situation we face in life with grace.”  He also mentioned that he had been practicising the pose for three hours daily in the last five years.

Moradiya become interested in yoga when he was only eight years old. He went to pursue his passion, bagging several awards for his extraordinary performance. He even went on to study philosophy and ancient knowledge of yoga for a better understanding of the subject.

The 22-year-old’s remarkable feat won him much appreciation on the internet. Several users praised the young man for his dedication, while others congratulated him for entering the Guinness World Records.