Home World How United States Institute of Peace has been transformed into Unites States... 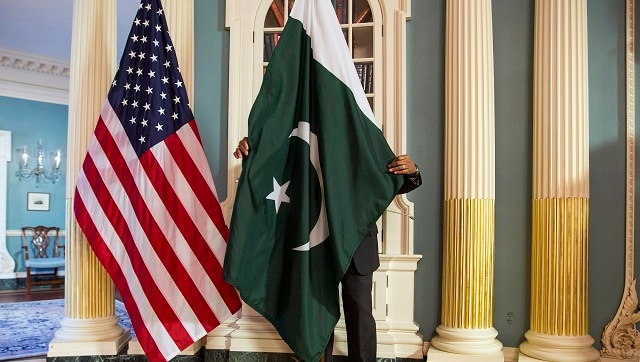 The United States Institute of Peace, run with US taxpayers’ money, has become a hub of Pakistan apologists and supporters In late April 2022, another luminary, retired Ambassador Richard Olson, of the United States Institute of Peace, was exposed for engaging in a wide array of illegal influence operations, for which he failed to file the requisite ethics disclosure documents required by US law. Prior to joining the United States Institute of Peace as Senior Advisor, Olson worked as an American Foreign Service Officer for 34 years. He served as the US special representative for Afghanistan and Pakistan from 2015 until 2016 when he retired. In this capacity, he reported directly to Secretary of State John Kerry. Between 2012 and 2015, he served in Islamabad as the ambassador to Pakistan. Olson met a Pakistani-American businessman — whose name has not been revealed— “who offered him a one-year contract with a salary of $300,000 that would start after he left the State Department,” to lobby on behalf of the government of Qatar.

In 2009, the now-infamous Moeed Yusuf joined the United States Institute of Peace. I quickly raised concerns with Ambassador William Taylor as well as Andrew Wilder, both of whom were in leadership positions, that Yusuf had dubious ties with the Pakistan military and may not be acting in good faith to advance US interests. Over the years, my suspicions grew, and I even reported him to the US Federal Bureau of Investigations. By the time he left, he was an Associate Vice President for the United States Institute of Peace. Under Yusuf’s tenure, he relentlessly advocated for Pakistan’s preferred policy positions and brought the institute into alignment with this mission. This is all permissible under a broad reading of academic freedom, and I would have had no qualms about his lobbying on behalf of Pakistan had he done so at the Brookings Institute, where his mentor Steven Cohen worked.

During Yusuf’s tenure, USIP became the premier venue for hosting a variety of Pakistani officials. The events are by invitation-only and not open to a general audience despite the fact that the general public pays for the institute and these events. (I have learned that despite being a taxpayer, I am not only banned from these events but even from the building my tax dollars subsidise.)

During the last event at USIP to which I was invited, several senior Pakistani defence officials were assembled to disseminate the preferred fictions of the Pakistani deep state to the assembled American analysts and scholars. This event, like many like it, was arranged by — and paid for — by another felon, Nisar Ahmed Chaudhry, a dentist from Maryland. In fact, it was Chaudhry who invited me and saw it as an opportunity for me to “mend the fences” with the Pakistani Army. That was not to happen. Chaudhry, prior to his arrest, routinely hosted massive fetes with the Pakistani military and other dignitaries that would ordinarily not be affordable to the average dentist.

According to the US Department of Justice, Chaudhry routinely interacted with representatives of the Pakistan government at the Embassy and Consulate in New York. Notably, he “interacted with numerous institutes, foundations and organizations operating in and around Washington, DC, commonly referred to as ‘think tanks’, that played a role in shaping and influencing US foreign policy”. He organised roundtable discussions in Washington, DC and Maryland “between his American government and think tank contacts and visiting Pakistan government officials to influence United States foreign policy in a direction favourable to Pakistan’s interests”.

He explicitly cultivated contacts within these entities, as many of us experience, and in the US government, to garner detailed information about American policies towards Pakistan as they evolved. And, as I experienced myself, he specifically sought to “neutralise unfavourable views of Pakistan held by current and former US government officials by employing certain methods of discussion with these individuals during personal interactions with them and/or by controlling and manipulating discussion at the roundtable events he organised or attended”.

While his facilitations at events at USIP were most notable, I was aware that he organised such events at other think tanks around town such as the Brookings Institute. I can also say that I declined to attend his various offers to join the soirees at his home. And in full disclosure, I also repeatedly reported him to FBI officials with whom I interacted and I was very gratified when he was sentenced to five years in jail.

USCIRF has deep Pakistani links, but why is West so willing to push vacuous anti-India narrative?

As is well known, Moeed Yusuf left USIP to join Imran Khan’s government first as an adivisor to Khan and later as the National Security Advisor. Rather than being chagrined abut hosting a Pakistani asset, USIP doubled down. Andrew Wilder, along with Michael Krepon, initiated a petition against me for my continued efforts to raise concerns about Moeed Yusuf. Moreover, USIP continues to be chuffed about its association with Yusuf which is hardy the response expected from an organization funded by the US taxpayer. Yusuf’s various unhinged rants about Kashmir and Afghanistan are all in alignment with the deep state’s policy positions. USIP acts as if Pakistan is not a state that is hostile to the United States.

Now turning to Ambassador Olson, for those of us who have interacted with him, his recent guilty plea to illegal lobbying came to no surprise. The only surprise I had was that he was lobbying on behalf of the Qatar government rather than the Pakistani government given that there was no Pakistani perfidy he would not justify. According to the US Department of Justice, Olson accepted a post-retirement one-year contract for $300,000, which was paid by a Pakistani-American businessman whose name has not been revealed. This is in addition to other emoluments such as a first-class airfare from new Mexico to London, which was valued at more than $18,000 and a stay in a London luxury hotel in January 2015. By way of comparison, an American employee earning $7.25 hour — the federal minimum wage — who works a 40-hour week will earn about $15,000 per year.

While at USIP, Olson wrote several briefs and gave several interviews on issues pertaining to Pakistan. Unsurprisingly his musings frequently exculpated the Pakistani state. For example, he said of the Jaish-e-Mohammad suicide attack that triggered what became known as the “Balakot” crises: “Now, it’s important to note that as far as we know, and of course I don’t see intelligence anymore, there’s no direct line between Pakistan and the attack, but the group that claimed responsibility is based in Pakistan.” If there was such intelligence, Olson surely wouldn’t be able to discuss this. This assertion also flies in the face of everything that is known about the way the ISI works with its proxies.

In his February 2021 piece on the “Pakistan problem”, Olson studiously avoided the central issues that Pakistan is a de facto — although not de jure — state sponsor of terrorism in India, engaging in rapid horizontal and vertical nuclear proliferation as well as being the most important reason for the American defeat in Afghanistan. In his January 2022 discussion of Afghan-Pakistan relations, he claims that the fundamental issue between the two states is “Kabul’s allowing of a de facto safe haven for the Pakistani Taliban (Tehreek-e-Taliban Pakistan; TTP) is already a large irritant in the bilateral relationship.”

This is pretty rich. While it is true that Afghanistan has long such safe haven to the TTP, it is insane that Olson did not mention the fact that Pakistan has supported the Taliban in every way — financially, militarily, politically and diplomatically — since the 1990s! Readers should peruse Olson’s other writings to see the impacts of this compromised analyst upon key issues covered by USIP.

The writer is a professor of Security Studies at Georgetown University. She is the author of ‘In Their Own Words: Understanding the Lashkar-e-Tayyaba’ and ‘Fighting to the End: The Pakistan Army’s Way of War’. She tweets @cchristinefair. Her website is christinefair.net. She Tweets at @CChristineFair. Views expressed are personal.