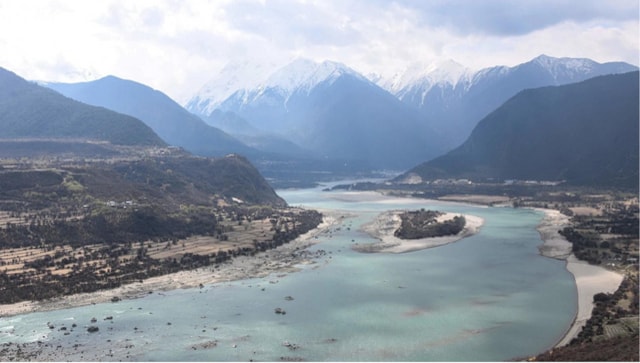 The Chinese government is building a tunnel over 1,000 kilometers long to take water from the Brahmaputra to the arid regions in western China. Starting near Tsangmo in Tibet, the tunnel will stretch to the Taklamakan desert in Xinjiang Image Courtesy AFP

World’s Longest Tunnel: Chinese activities in Tibet have rung alarm bells within the security establishment of India for over half a century. But a new development has taken the threat posed to Indian interests to a whole new level.

In order to develop its economy, China has initiated several mega construction projects. Now the Chinese government has reportedly embarked on a new project in the formidable heights of the Tibet plateau which is grandiose even by China’s opulent standards.

According to reports, China is engaged in building the world’s longest tunnel which has the potential to destroy the agriculture of India’s north-eastern states.

If media reports are to be believed, the Chinese government is building a tunnel over 1,000 kilometers long to take water from the Brahmaputra to the arid regions in western China. Starting near Tsangmo in Tibet, the tunnel will stretch to the Taklamakan desert in Xinjiang.

Tsangmo already has a dam on the Brahmaputra which had evoked vehement protests from India. The world’s longest tunnel will emerge from a new dam which is being built around 13 kilometers from the existing dam at Tsangmo.

The tunnel that China is building has increased concerns in the rest of the world. In fact, experts have already warned that this tunnel will destroy the biodiversity of Tibet. The project will also increase the danger of earthquakes.

News Next Desk - December 6, 2022 0
The Computer History Museum (CHM) has, with Adobe's permission, released the source code for an early version of PostScript, a...
%d bloggers like this: