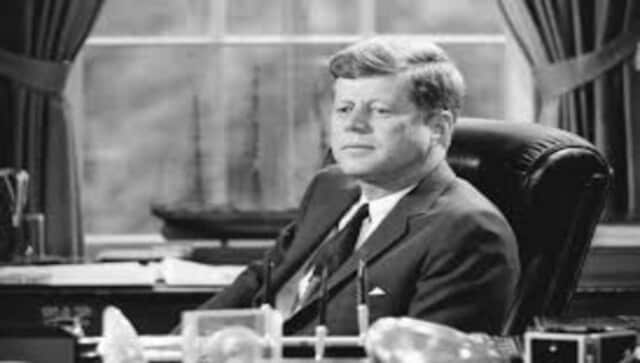 The 35th president of the United States, John F Kennedy, was shot dead on 22 November 1963, in Dallas, Texas, while travelling in a motorcade through Dealey Plaza. News18

Today, 22 November, has witnessed a number of memorable events in different years. While the China Clipper crossed the Pacific for the first time, Disney-Pixar-produced Toy Story engraved its name in the history of animated films on the same date. On the same day in 1986, Mike Tyson announced himself by becoming the youngest Heavyweight Champion of all time. Looking at tragic incidents that happened on this very day, United States President John F. Kennedy was brutally shot dead in 1963. New York’s Kew Gardens station also witnessed the city’s most terrifying train accident in 1950. Here are some note-worthy events that happened on 21 November:

On 22 November 1935, the “China Clipper” made its best-known flight when it took off from San Francisco with 58 mail bags weighing 1,837 pounds towards Manila, Philippines. The aeroplane arrived in Manila on 29 November. It was the first aircraft to depart from San Francisco and cross the massive Pacific ocean. Pan American World Airways’ founder gave the “China Clipper” its moniker in October 1935. The first Pacific Clippers flew for over a year delivering mail before serving as a passenger carrier. At the time, mail delivery was responsible for half of Pan Am’s annual earnings.

The terrible reputation of experiencing the greatest accident in both New York State and Long Island’s railroad history belongs to the Kew Gardens station. On 22 November 1950, a full westbound Long Island Rail Road train collided with another overloaded commuter express on an overpass at Metropolitan Avenue and 125th Street in Richmond Hill, Queens, killing about 75 people. In the tragic mishap, as many as 130 people were reportedly injured.

The 35th president of the United States, John F Kennedy, was shot dead on 22 November 1963, in Dallas, Texas, while travelling in a motorcade through Dealey Plaza. When Lee Harvey Oswald, a former US Marine, gunned down Kennedy at the nearby Texas School Book Depository, Kennedy was in the car with his wife Jacqueline, Texas Governor John Connally, and Connally’s wife Nellie. The attack left Governor Connally with severe injuries. Kennedy was declared dead at Parkland Memorial Hospital roughly 30 minutes after the assassination.

The record for the youngest heavyweight champion ever was set on 22 November 1986, when 20-year-old Mike Tyson crushed 33-year-old Trevor Berbick in a battle of just five minutes and 35 seconds. After achieving the crown of the World Boxing Council (WBC), Tyson assured his manager, “I’m the youngest heavyweight boxing champion in history, and I’m going to be the oldest.”

On 22 November 1995, Toy Story, the first full-length animated feature film made its theatre debut. It was the first product of the Pixar-Disney collaboration. The rivalry in Toy Story centres around a boy’s two toys including Buzz Lightyear, a flashy new astronaut toy, and cowboy Woody, the kid’s favourite plaything. Woody is voiced by Oscar winner Tom Hanks, and Buzz by Tim Allen. The movie made over $192 million domestically and $358 million globally.

News Next Desk - December 6, 2022 0
The NSAs of India and Central Asian countries on Tuesday called for collective action to combat challenges like terror financing, radicalisation, and use of...
%d bloggers like this: