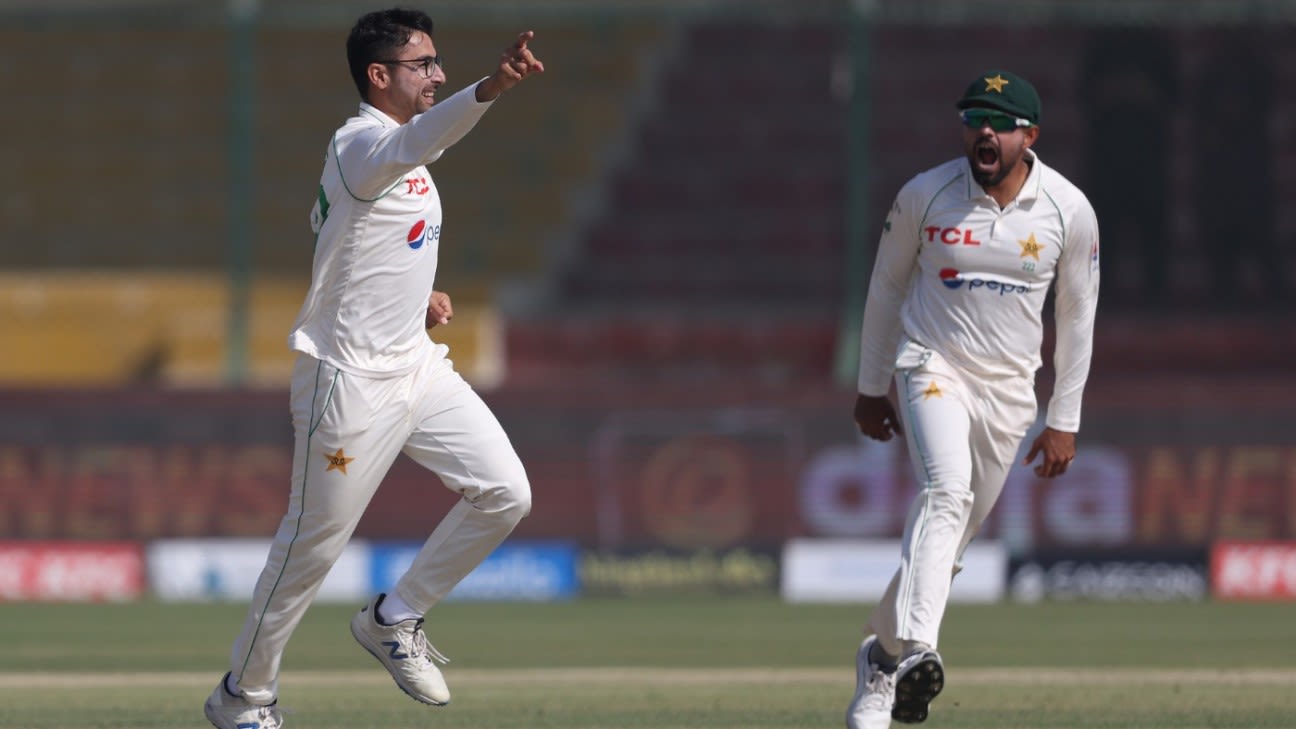 Harry Brook made the third hundred of his extraordinary series as England chipped away at the deficit on the second afternoon of their third and final Test against Pakistan. He reached three figures with a back-foot punch through the covers off Abrar Ahmed, prompting a standing ovation from Karachi’s National Stadium and the England balcony.
By tea, Brook had added 109 in an unbroken sixth-wicket stand with Ben Foakes, unbeaten on 42 in his first innings of the tour. Babar Azam used the same two bowlers – Abrar and Nauman Ali – for the vast majority of the second session and by the interval, they had bowled 50 of England’s 61 overs between them.
Brook’s afternoon had started in calamity as he ran out his captain, Ben Stokes, in the second over after lunch. Brook worked Mohammad Wasim into the leg side and initially started coming back for a third run when Azhar Ali prepared to throw the ball in from deep midwicket, but scurried back to the keeper’s end with Stokes already charging down towards him.

He managed to sneak his bat over the popping crease just ahead of Stokes, who responded by throwing his head back before giving Brook a calm thumbs-up, as if to exonerate him for his role in the mix-up. At that stage, England were 145 for 5 and still trailing by 159 runs on first innings.

But Brook pressed on unfazed, rifling a pull through the leg side off Abrar to get his innings back up and running and reaching a 73-ball half-century with a top-edged sweep. He found an able partner in Foakes, who overturned an early decision that went against him and calmly rotated the strike through the session.

Foakes was given out on 9 when struck on the pad by Abrar’s wrong’un, as the ball popped up to short leg. He was unsure whether he had been given out caught or leg-before, but in the event, he survived on both fronts: there was no inside edge, and ball-tracking technology predicted the ball would have missed his leg stump.

By the drinks break, Pakistan had gone flat in the field and Brook recognised he had the opportunity to cash in. He pumped Abrar back over his head for a straight six and looked at ease against both spinners, reaching a fluent hundred off 133 balls by standing tall and crunching Abrar through extra cover.

Brook’s hundred was his third of his nascent Test career, in only his sixth innings. When he passed 94, Brook also broke Alastair Cook’s record (450 runs in 2015/16) for the most runs by an Englishman in an overseas Test series against Pakistan.

Earlier, with the pitch showing more signs of variable bounce on the second day, Ben Duckett and Ollie Pope had looked comfortable in bringing up a 50-run stand for the second wicket. Wasim, on debut, conceded three early boundaries and was whisked out of the attack by Mohammad Rizwan, who stood in as captain for the first hour with Babar suffering from a headache.

Faheem Ashraf, the other seamer in the Pakistan line-up, bowled a solitary over before Nauman and Abrar operated in tandem for next hour. Pope was busy, nudging singles and punching either side of the wicket, while Duckett continued to sweep regularly as he has throughout the tour and brought up a 50 partnership when skipping down to loft Abrar back over his head for a straight six.

It was Nauman, the left-arm spinner, who made the breakthrough. He found sharp spin from outside Duckett’s off stump, trapping him on the pad as he hung back rather than coming forward to a full ball. He was given out and reviewed the on-field decision in the hope that the ball had struck him outside the line of off stump, but ball-tracking technology gave an ‘umpire’s call’ verdict on impact.

And Nauman struck again with his next ball to continue Joe Root’s lean run on this tour. Bowling from around the wicket, he drew Root forwards with a full ball that turned away from the bat, and Root’s tentative push flew to Salman Ali Agha at slip. He held onto a sharp, low chance just above the turf, leaving England 58 for 3.

That brought Brook to the crease, who calmly worked the hat-trick ball into the off side and made his intentions clear by skipping down the pitch to the sixth delivery he faced, swinging Abrar high and mighty back over his head for six.

Brook survived a review for lbw when trapped on the crease by Abrar – with Babar back on the field to send it upstairs – but Pakistan’s legspinner was undeterred. No sooner had Pope reached his third half-century of the tour by slashing Nauman through point, he lost his off stump. Hanging back to combat the low bounce, he was beaten by Abrar’s fizzing legbreak and could only shake his head in disbelief.

Brook swung Abrar back over his head for six more later in the same over, bringing up another milestone for Ben Stokes and Brendon McCullum’s team. It was England’s 88th six in men’s Tests in 2022, breaking India’s 2021 record for the most sixes by a team in a calendar year (where data is available).

News Next Desk - January 31, 2023 0
Last week Tollywood was abuzz with the Bollywood vs Tollywood debate amid Shah Rukh Khan’s much-anticipated film ‘Pathaan’s release on January 25. Not only...

News Next Desk - January 31, 2023 0
The BBC documentary, “India: The Modi Question”, is a political hitjob. If this documentary was produced in 2014 when Narendra Modi became Prime Minister...
%d bloggers like this: