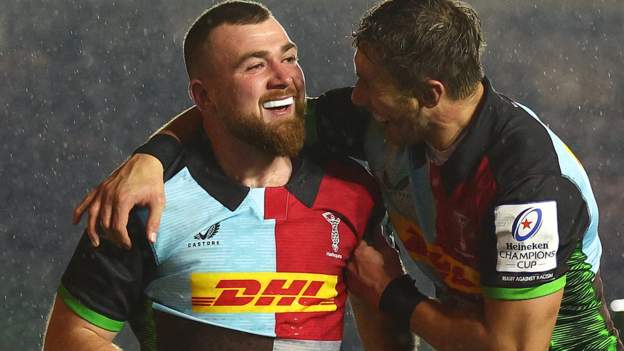 Harlequins edged past 14-man Racing 92 to secure their first win in this season’s Heineken Champions Cup.

The hosts led through an early try from George Head, but Finn Russell’s penalty and a converted try from Kitione Kamikamica gave Racing the lead at half-time.

Quins retook the lead after the break when Andre Esterhuizen crashed over.

Kamikamica was sent off for a dangerous tackle on Nick David, and defeat leaves Racing in Pool A’s bottom two.

In soaking conditions, Quins made the best possible start when Head sprinted in from outside the 22 to score just two minutes into the hooker’s first start in the competition.

Racing, who had lost their opening match 42-10 at home to Leinster, reduced the gap to four points when Finn Russell knocked over a penalty but the Scottish fly half missed another from long range on 30 minutes.

But the French side took the lead when number eight Kamikamica, also making his European debut, crashed over from a lineout and when Russell converted, the Parisians had a three-point lead.

Esterhuizen crossed after 48 minutes, but after referee Craig Evans initially awarded no try for the ball being held up, the TMO overturned the decision and Tommy Allan kicked his second conversion to see Quins retake the lead.

Kamikamica’s tackle on David saw the Quins full-back land on his neck, and after a TMO review the 26-year-old was shown the red card by Evans.

Racing rallied well despite their numerical disadvantage, but Quins held on to move on to five points after two games following their bonus-point loss to the Sharks in South Africa.