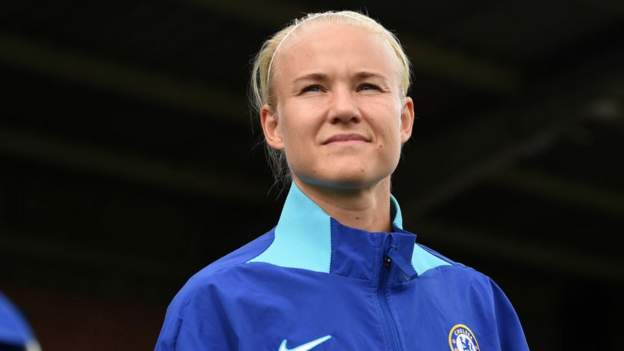 Hayes does not know how long Harder will be out, but said she will not be playing “anytime soon”.

“It’s a huge blow for her and for the team,” said Hayes.

Speaking ahead of Chelsea’s Champions League game against Real Madrid on Wednesday, she added: “She is an outstanding player and person, and I know the whole team is rallying around her.

“We need to support her in the best way we can and we do have the depth to be able to cope with that. Not that you can replace Pernille Harder.”

Hayes also shared her frustration at the injury coming on international duty and reiterated her call for player welfare to be looked at more closely.

“I think it is outrageous that players are put in those positions,” said Hayes.

“It’s the travel and the in between that causes a lot of the problems. For someone like Pernille she always wants to do everything.

“It’s not the fault of anybody, sometimes with these injuries they come for many different reasons.

“But I certainly feel players playing in World Cups and European Championships being given two weeks rest in between seasons is unacceptable for them.

“Forget about clubs and countries, we need to start putting the players first.”

England women’s players, who beat Germany in the European Championship final, this summer, only had a fortnight break before heading into pre-season with their respective clubs.

Players’ union Fifpro said in November footballers are being “pushed past acceptable limits”.