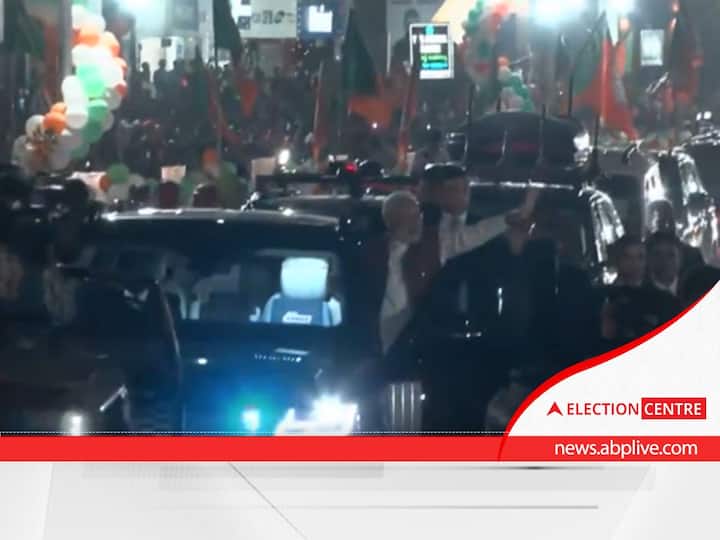 New Delhi: Ahead of the Gujarat Assembly elections, Prime Minister Narendra Modi started his roadshow in Vapi on Saturday. Amid tight security, PM Modi could be seen waving at the crowd cheering at him. He also urged the voters to vote for Bharatiya Janata Party (BJP) to help them retain the leadership.

According to reports, the Prime Minister is expected to hold several public meetings across the poll-bound state over the next two days.

Union Home Minister Amit Shah, who has been frequently campaigning in the state to give final touches to the party’s poll strategy, may hold over 30 public meetings for the elections scheduled for December 1 and 5, as per a report by news agency PTI.

It is to be noted that this is Modi’s second visit to his home state after the announcement of the Gujarat Assembly poll schedule. During his last visit on November 6, PM Modi had addressed a rally at Kaprada in Valsad district and also attended a mass marriage event in Bhavnagar.

As per reports, PM Modi will visit Somnath Temple and then address four rallies in the Saurashtra region on Sunday. Veraval, Dhorarji, Amreli and Botad have been finalised as the venues for his four upcoming poll rallies.

On Monday, PM Modi will hold three rallies in Surendranagar, Bharuch and Navsari.

While Bharuch was the constituency of former Congress leader Ahmed Patel, the BJP state chief CR Paatil, who hails from Navsari, has been winning his Lok Sabha seat with one of the top margins across the country.

News Next Desk - December 4, 2022 0
Google has announced that it's bringing end-to-end encryption to group chats in the Google Messages app. The security upgrade is heading to beta users...

News Next Desk - December 4, 2022 0
Shivraj Singh Chouhan, the chief minister of Madhya Pradesh, referred to "Love Jihad" when he remarked on Sunday that individuals of other religious convictions...

News Next Desk - December 4, 2022 0
New Delhi: It's another day at Bigg Boss house and we are back with the updates! The episode begins with Tina and Priyanka discussing...

News Next Desk - December 4, 2022 0
Moscow will intensify its cyber efforts to pressure the sources of Ukraine’s military and political support both domestic and foreign, according to Microsoft Corp. ...