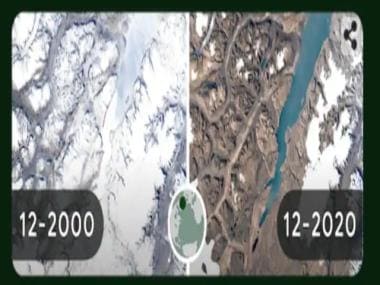 On the occasion of Earth Day today, 22 April, Google has created a series of animated imageries of four locations to showcase the impact of climate change on earth. Every year, Earth Day acts as a reminder to protect our planet and make it sustainable for future generations.

These four animations or GIFs will be changed every hour by Google, showcasing the impact of climate change in the long run.

The first doodle shows the real imagery of Mt. Kilimanjaro in Tanzania. The images that we see in the time-lapse have been taken each December from the year 1986 to 2020.

The second imagery shows a glacier retreat in Sermersooq, Greenland and was taken each December from the year 2000 to 2020.

The third imagery that appears on the Google homepage is of the Great Barrier Reef in Australia and shows the coral bleaching that is happening on the Lizard Island. The images used have been taken each month from March to May 2016.

The fourth and last doodle is from the Harz forests in Elend, Germany that has been destroyed by bark beetle infestation due to the rising temperatures and severe drought. The images have been taken each December from 1995 to 2020.

Using real time-lapse imagery from Google Earth Timelapse and other sources, the doodle showcases the impact of climate change across four different locations around our planet. Users can view these scenes throughout the day as these will remain on the homepage for several hours at a time, a blog post from the search engine mentioned.

News Next Desk - October 6, 2022 0
Four-member Sikh family, including an eight-month-old child who were kidnapped in the US state of California earlier this week were found dead by sheriff...

News Next Desk - October 6, 2022 0
New Delhi: Ranbir Kapoor and Katrina Kaif were recently clicked together under one roof and pictures broke the internet. The duo was present at...
%d bloggers like this: