Home World Gloomy winters in Saint-Firmin: Why this French village is giving up skiing The residents of Saint-Firmin, a small village in France, will no longer be able to glide through the thick snow that it once received in abundance as the village’s ski lift was dismantled last month.

Reports suggest that there’s no snow left to run the ski lift any longer, a direct result of global warming.

An old resident of Saint Firmin, Didier Beauzon who is also an elected official of the village told CNN, “Global warming happened, and that’s what changed our view of this site.”

He further said, “We no longer have the climate that produces constant snow, and we can’t install snow cannons here.”

The ski lift had not been used in the past 15 years.

About the ski lift

The ski lift has a history that goes way back.

Built in 1964, the ski lift was originally built in 1963 to facilitate children of the village to learn the art of skiing before they went out to more challenging trails around the French Alps.

The lift stood proudly at a height of 1,550 metres, facing south, which according to France24, gave it the advantage of remaining a winter sports destination.

The ski site has been a centre of attraction for people inside and outside of Saint-Firmin and has had an age-long tradition of conducting different activities for kids. 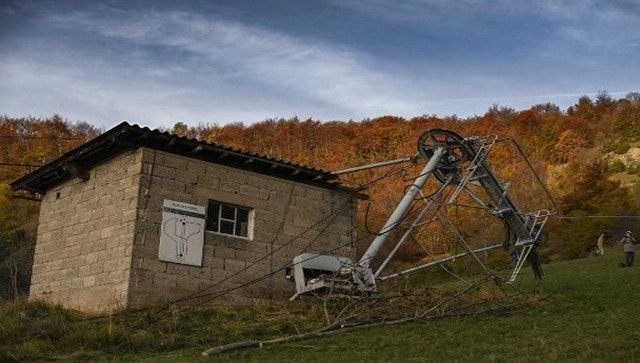 The sports association of the hamlet used to hold competitions during the weekends. Not just this, there were open fun events that were held every Wednesday to host those who came from outside the village followed by a prize ceremony to facilitate the winners that took place in the centre square.

Beauzon recalled, “Everybody could win a prize, all you had to do was get to the bottom, regardless of how.”

The prizes included little things like pair of socks and chocolate bars. The skiing season used to end with awarding of trophies to Saint-Firmin’s strongest skiers.

Around 20 workers worked for two days to bring down the structure. The group has also dismantled 10 other ski lifts in France, says Oliver Bustillo the manager of Mountain Wilderness, an environmental group tasked with dismantling the ski lift.

The dismantled parts of the lift will be kept in a local scrapyard.

The total cost of tearing the giant structure was bore by the local government with the help of various charities which amounted to a whopping $20, 691. Bustillo said that the recovered metal was collected by the company and will later be recycled.

Commenting on the dismantling process Nicolas Masson, the administrator of Mountain Wilderness said, “Removing a structure and putting things back in their natural state should be the norm, it’s a fundamental part of sustainable development. Unfortunately, that doesn’t always seem so obvious.” The ski lift was torn down by a company called Mountain Wilderness. AFP

Counting this as their latest operation, Mountain Wilderness has conducted around 70 jobs, a dozen of them of abandoned ski lifts.

According to France24, 3,000 structures are rusting across French mountain ranges and the company’s aim is to encourage local authorities to remove them and turn the landscapes into their pristine state.

Another job of the NGO is to run a clean-up campaign that aims to nudge communities to consider alternatives to focusing on skiing and develop outdoor activities more in tune with a changing climate.

According to EuroNews, southwest France experienced heat spells in the month of October. In some parts of western France, temperatures shot up to 29 degrees Celsius.

The heatwave caused much discomfort to people living in the country. A man told reporters, “At this time of the year, we should already have frost, the birds are not flying, we don’t understand, what’s going on? The planet is in danger.”

Rivers in Toulouse, a city in France, which is known to remain submerged, for the most part, had dried up.

A development study expert Jean-Michel Fabre said, “What is impressive is that this year we were able to walk on the river in July, August, September, and now October. So, we have four months where we have had the Garonne very low.”

According to The Associated Press, some French farmers even reported that they saw a drop in their production, especially in crops like soy, sunflower and corn yields.

Had severe Covid-19? You may face faster brain ageing

News Next Desk - December 8, 2022 0
It has been nearly three years since the World Health Organization declared the Covid-19 outbreak a pandemic. Since then, people in power or family...
%d bloggers like this: