Home World From Droupadi Murmu to Mahsa Amini: Those who grabbed headlines in 2022 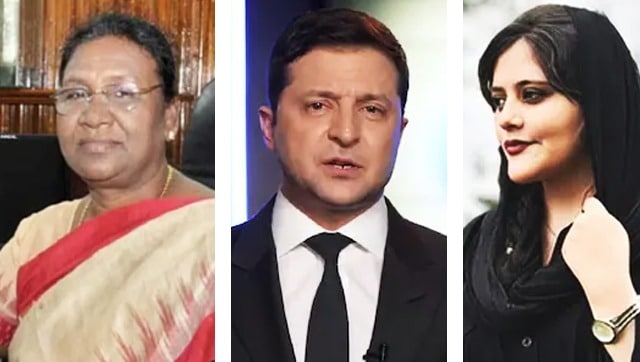 It has been a grim year dominated by war, crisis, and protests. But in India, we had a lot to cheer about, especially as women made their mark. As the year ends, the conflict rages on but there was something to cheer for as Lionel Messi’s Argentina lifted the trophy at the FIFA World Cup 2022.

There are several who hit headlines for scripting history; the others for not-so-good reasons. As 2022 closes to an end, we take a look back at the newsmakers who had our attention. Ukrainian President Volodymyr Zelenskyy meets soldiers at the site of the heaviest battles with the Russian invaders in Bakhmut, Ukraine. AP

If there is one real hero to be picked for the year, it is undoubtedly Ukraine’s Volodymyr Zelenskyy. The president is TIME magazine’s 2022 Person of the Year.

The comic-turned-politician was little known before Russia invaded Ukraine on 26 February. Today, he has left the world inspired as his country has fought the mighty Russian military for ten months.

Zelenskyy is not a leader watching from the sidelines. He is in the thick of things. And he is not the one to back down.

In April, Zelenskyy told TIME Magazine’s Simon Shuster that he had aged and  changed “from all this wisdom that I never wanted.” His transformation has been stark.

“Aides who once saw him as a lightweight now praise his toughness. Slights that might once have upset him now elicit no more than a shrug. Some of his allies miss the old Zelensky, the practical joker with the boyish smile. But they realize he needs to be different now, much harder and deaf to distractions, or else his country might not survive,” Shuster writes. 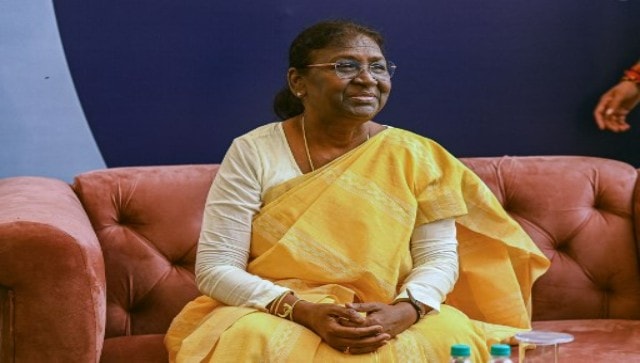 Droupadi Murmu was elected as India’s president on July 21 with the backing of the ruling party, making her the first person from the marginalised community to occupy the top post. AFP

2022 has been a good year for women in India; many have shattered stereotypes and gained influence in the world. The most prominent is Droupadi Murmu.

A tribal woman from Odisha’s undeveloped districts of Mayurbhanj, Murmu became the first Adivasi and the second woman to become the First Citizen and the Supreme Commander of India’s Armed Forces.

Born into poverty in the Santhali tribal home, she was the first girl in her village to attend college. Before taking a plunge into politics, she was a teacher at a school in Odisha’s Mayurbhanj and later worked as a junior assistant in the irrigation and power department of the state government.

A grassroots leader, she served as a councillor, the vice president of the BJP’s Scheduled Tribes Morcha and a minister in Chief Minister Naveen Patnaik’s Biju Janata Dal-Bharatiya Janata Party coalition government. A protestor holds a portrait of Iranian Mahsa Amini during a rally in support of the demonstrators in Iran. AFP

Mahsa Amini was a regular 22-year-old who was visiting Tehran with her family. But she caught the attention of Iran’s morality police for “incorrectly” wearing the hijab.

She was detained and kept in custody for three days. She reportedly slipped into a coma and died in custody. The authorities claimed that she died of a heart attack at a police station. However, eyewitnesses who were also detained with her, reported that she was severely beaten.

Amini’s death led to unprecedented ant-hijab protests in the country. Women and students poured into the streets. Many took off their hijabs and chopped off their hair. The demonstrations spread to other parts of the world.

Four months after Amini’s death, Iran continues to raise its voice. The stir against hijab norms has grown into anger against the regime which has been enforcing laws and violating human rights.

More than 18,000 people, including 70 journalists, have been arrested. According to Vox.com, nearly 500 protesters have been killed. But Iranians are not ready to fight on. Eknath Shinde aligned with BJP to form a new government and went on to become Maharashtra’s Chief Minister. PTI

From driving an autorickshaw in Thane to becoming the most powerful leader in Maharashtra, Eknath Shinde has made headlines this year for leading the rebellion against the Uddhav Thackeray-led Maha Vikas Aghadi government.

The crisis began when Shinde along with a majority of the party MLAs fled Mumbai… first to Surat and then Assam. It resulted in an eventual split in the Shiv Sena.

Shinde aligned with the BJP to form a new government and went on to become Maharashtra’s 20th chief minister with Devendra Fadnavis as his Deputy. Elon Musk gestures as he speaks during a press conference at SpaceX’s Starbase facility near Boca Chica Village in South Texas. AFP

Elon Musk’s overleverage acquisition of Twitter in October created a high-voltage drama in the tech industry.

The Tesla and SpaceX owner initiated the $44 billion deal to introduce “absolute free speech”. However, after facing resistance from the company he decided to step back, citing “fake handles” as the reason, only to be forced by the social media giant to go through the deal again.

His latest ploy was a Twitter poll, which voted him out as CEO. What is the next trick up his sleeve? Rajasthan chief minister Ashok Gehlot was Sonia Gandhi’s confidant; her go-to man. He was the frontrunner to be the Congress party’s chief as it held its first presidential election since 1998 to pick a non-Gandhi leader.

But Congress’ one man, one post’ rule meant he would have to step down as the chief minister of Rajasthan. However, he did not want to vacate the post for his rival Sachin Pilot.

In the end, Mallikarjun Kharge became the president. Gehlot continues to hold Rajasthan’s top job. His tussle with Pilot is still on. In a recent interview with NDTV, the chief minister called his former deputy a “gaddar”.

Congress said there has been a truce between the two but it remains to be soon how long it will last. Is he GOAT? Is he not? That is a debate that might continue for ages. But Lionel Messi played a big role in making sure that Argentina takes home the FIFA World Cup 2022 after playing what has been dubbed as the “best final ever”.

His team was up again France. He scored twice for Argentina as they played out a 3-3 draw over 120 absorbing minutes. He was spot on during the penalty shoot-out after which the score settled at 4-2.

He lifted the trophy and become the only player to win two Golden Balls (best player of the tournament in 2014 and 2022) and broke many a record. And most importantly, he brought joy to Argentinians who find themselves amid economic depression and millions of fans around the world. Falguni Nayar speaks with people during the company’s IPO listing ceremony at the National Stock Exchange in Mumbai. AFP

In 2012, when she was months away from turning 50, Falguni Nayar came up with the idea of Nykaa (feminine in Sanskrit) to provide beauty products online. Today, she is a household name.

In the formative years, Nykaa was funded by Nayar and her husband Sanjay, the chairman of private equity major KKR & Co. The firm ran on family funds because she didn’t want to raise money. “I wanted to make the metrics happen,” she told The Economic Times.  “We had good momentum by the time I went to investors. We had access since my husband and I were both bankers.”

In March 2020, the company become a unicorn. A year later in November 2021, Nayar took Nykaa public. With each year, she reached a new height.

However, since Nykaa was listed last year, there is a decline in stock prices by 56 per cent, resulting in a fall in Nayar’s wealth- from $6.5 billion in late 2021 to over $2.4 billion currently, according to Forbes. But the investment banker-turned-entrepreneur is only looking forward. It has been a year of political chaos in the United Kingdom. The country saw three prime ministers in two months, the fifth in six years. According to a report in the BBC, it is the fastest turnover of leaders in No 10 for nearly a century.

Boris Johnson made way for Liz Truss, who went on to become the shortest-serving premier in the country’s history. During her 45 days in the office, she was criticised for her mini-budget which left the currency tumbling.

This catapulted Indian-origin Rishi Sunak to the top. He went on to become the first non-white prime minister of the UK. However, he has a daunting task ahead of him. He has to steer the economy at a time of its worst crisis; he has to instil faith in the public that the Conservative Party has what it takes.

He has done a few things right but he has a lot to fix. Alia Bhatt poses during a news conference for trailer launch of the upcoming dark comedy film ‘Darlings’ in Mumbai. AFP

She is Bollywood’s top actor and has been so for too long. In a year that the Hindi film industry produced flop after mega flop, her three films- Gangubai Kathiawadi, RRR, and Darlings- received a lot of love.

With the Sanjay Leela Bhansali directorial, Bhatt set a record for women-led films as it got an opening of Rs 10 crore, giving people a reason to visit cinema halls which were hit by the pandemic.

There was more good news for Bhatt. The superstar tied the knot with her long-time beau Ranbir Kapoor on 14 April this year and just two months later, on 27 June announced that she was expecting their first child. The couple welcomed a daughter, Raha, on 5 November.

In August 2022, in an interview with Film Companion’s Anupama Chopra, Bhatt revealed the year went really beautifully and smoothly and that she is “extremely grateful” for that.

She said, “I’m extremely grateful. The year started off in the most special way because on the 1st of January is when my husband (Ranbir Kapoor) proposed to me. So when the year began with that day I was sure this year is going to be quite something. I knew this is going to be a unique year, however, I couldn’t believe it would be so unique.”

“Currently, I’m in a state of mind where I don’t want to tempt the universe when I know things are going so well. I just wish that the year goes by even more smoothly and beautifully,” the actress added.

It is definitely Alia Bhatt’s year.

Also read: From Alia Bhatt’s Gangubai Kathiawadi to Ayushmann Khurrana’s An Action Hero, here are the most acclaimed films of 2022