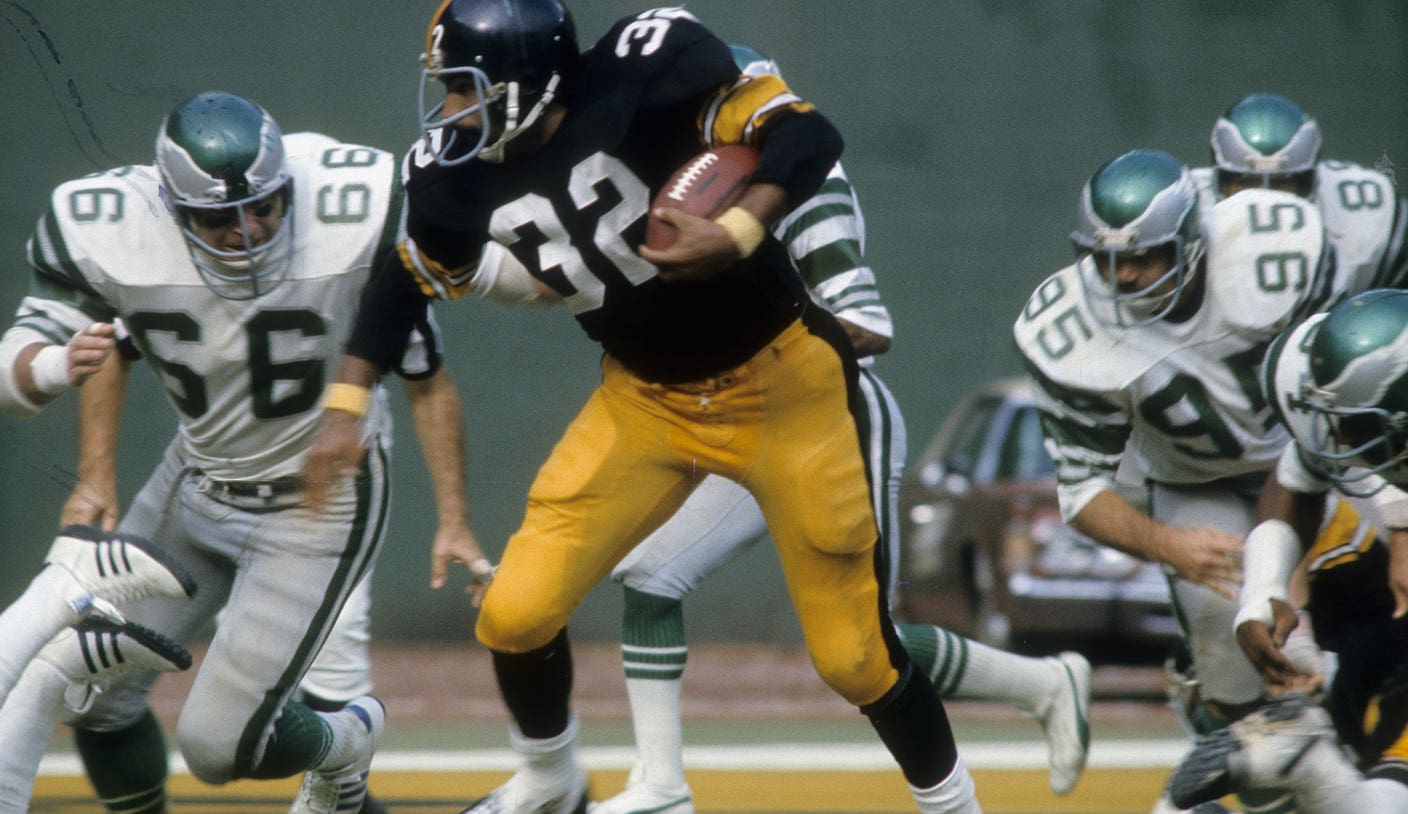 PITTSBURGH (AP) — Franco Harris, the Hall of Fame running back whose heads-up thinking authored The Immaculate Reception, considered the most iconic play in NFL history, has died. He was 72.

Harris’ son Dok told The Associated Press his father passed away overnight. No cause of death was given.

His death comes two days before the 50th anniversary of the play that provided the jolt that helped transform the Steelers from just another team into the NFL’s elite — and three days before Pittsburgh is scheduled to retire his No. 32 during a ceremony at halftime of its game against the Las Vegas Raiders.

“We have lost an incredible football player, an incredible ambassador to the Hall and most importantly, we have lost one of the finest gentlemen anyone will ever meet,” Pro Football of Fame president Jim Porter said in a statement. “Franco not only impacted the game of football, but he also affected the lives of many, many people in profoundly positive ways.”

Harris ran for 12,120 yards and won four Super Bowl rings with the Steelers in the 1970s, a dynasty that began in earnest when Harris decided to keep running during a last-second heave by Steelers quarterback Terry Bradshaw in a playoff game against Oakland in 1972.

With Pittsburgh trailing 7-6 and facing fourth-and-10 from their own 40 yard line and 22 seconds remaining in the fourth quarter, Bradshaw drifted back and threw deep to running back Frenchy Fuqua. Fuqua and Oakland defensive back Jack Tatum collided, sending the ball careening back toward midfield in the direction of Harris.

While nearly everyone else on the field stopped, Harris kept his legs churning, snatching the ball just inches above the Three Rivers Stadium turf near the Oakland 45 then outracing several stunned Raider defenders to give the Steelers their first playoff victory in the franchise’s four-decade history.

“That play really represents our teams of the ’70s,” Harris said after the “Immaculate Reception” was voted the greatest play in NFL history during the league’s 100th anniversary season in 2020.

While the Steelers fell the next week to Miami in the AFC Championship, Pittsburgh was on its way to becoming the dominant team of the 1970s, twice winning back-to-back Super Bowls, first after the 1974 and 1975 seasons and again after the 1978 and 1979 seasons.

Harris, the 6-foot-2, 230-pound workhorse from Penn State, found himself in the center of it all. He churned for a then-record 158 yards rushing and a touchdown in Pittsburgh’s 16-6 victory over Minnesota in Super Bowl IX on his way to winning the game’s Most Valuable Player award. He scored at least once in three of the four Super Bowls he played in, and his 354 career yards rushing on the NFL’s biggest stage remains a record nearly four decades after his retirement.

Born in Fort Dix, New Jersey, on March 7, 1950, Harris played collegiately at Penn State, where his primary job was to open holes for backfield mate Lydell Mitchell. The Steelers, in the final stages of a rebuild led by Hall of Fame coach Chuck Noll, saw enough in Harris to make him the 13th overall pick in the 1972 draft.

“When (Noll) drafted Franco Harris, he gave the offense heart, he gave it discipline, he gave it desire, he gave it the ability to win a championship in Pittsburgh,” Steelers Hall of Fame wide receiver Lynn Swann said of his frequent roommate on team road trips.

Harris’ impact was immediate. He won the NFL’s Rookie to the Year award in 1972 after rushing for a then-team-rookie record 1,055 yards and 10 touchdowns as the Steelers reached the postseason for just the second time in franchise history.

The city’s large Italian-American population embraced Harris immediately, led by two local businessmen who founded what became known as “Franco’s Italian Army,” a nod to Harris’ roots as the son of an African-American father and an Italian mother.

The “Immaculate Reception” made Harris a star, though he typically preferred to let his play and not his mouth do the talking. On a team that featured big personalities in Bradshaw, defensive tackle Joe Greene, linebacker Jack Lambert among others, the intensely quiet Harris spent 12 seasons as the engine that helped Pittsburgh’s offense go.

Eight times he topped 1,000 yards rushing in a season, including five times while playing a 14-game schedule. He piled up another 1,556 yards rushing and 16 rushing touchdowns in the playoffs, both second all-time behind Smith.

Despite his gaudy numbers, Harris stressed he was just one cog in an extraordinary machine that redefined greatness.

“You see, during that era, each player brought their own little piece with them to make that wonderful decade happen,” Harris said during his Hall of Fame speech in 1990. “Each player had their strengths and weaknesses, each their own thinking, each their own method, just each, each had their own. But then it was amazing, it all came together, and it stayed together to forge the greatest team of all times.”

Harris also made it a habit to stick up for his teammates. When Bradshaw took what Harris felt was an illegal late hit from Dallas linebacker Thomas “Hollywood” Henderson in the second half of their meeting in the 1978 Super Bowl, Harris basically demanded Bradshaw give him the ball on the next play. All Harris did was sprint up the middle 22 yards — right by Henderson — for a touchdown that gave the Steelers an 11-point lead they would not relinquish on their way to their third championship in six years.

Despite all of his success, his time in Pittsburgh ended acrimoniously when the Steelers cut him after he held out during training camp before the 1984 season. Noll, who leaned on Harris so heavily for so long, famously answered “Franco who?” when asked about Harris’ absence from the team’s camp at Saint Vincent College.

Harris signed with Seattle, running for just 170 yards in eight games before being released in midseason. He retired as the NFL’s third all-time leading rusher behind Walter Payton and Jim Brown.

Harris remained in Pittsburgh following his retirement, opening a bakery and becoming heavily involved in several charities, including serving as the chairman of “Pittsburgh Promise,” which provides college scholarship opportunities for Pittsburgh Public School students.

Reflecting on Harris’ legacy on Tuesday, before Harris’ passing, Steelers head coach Mike Tomlin called it “an honor to be in proximity to it, to know the man involved.”

Harris is survived by his wife Dana Dokmanovich and his son, Dok.

News Next Desk - January 31, 2023 0
KONE Elevators India, a fully owned subsidiary of KONE Corporation, a global leader in the elevator and escalator industry, announced that it has been...
%d bloggers like this: