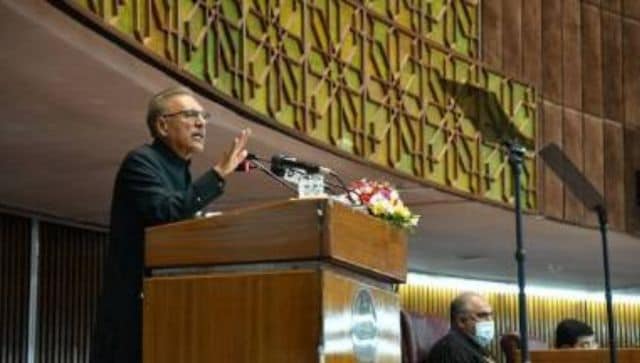 New Delhi: In a surprising turn of events earlier this week, Pakistan President Arif Alvi accused India of indulging in a “no peace policy” by ignoring cooperation with his country. Bilateral ties between the two neighbours nosedived post August 2019, when the Bharatiya Janata Party-led government at the helm in India, abrogated Article 370 of the Indian Constitution scrapping ‘special status’ for Jammu and Kashmir and designating it as two Union Territories.

Participating in the concluding ceremony of the Margalla Dialogue held in Islamabad, Alvi said that Pakistan has been trying to work out solutions on all its fronts, and expressed regret that India has failed to strike a chord of friendship and cooperation with Pakistan, squarely blaming New Delhi.

What is surprising in the Pakistan President’s comment is that it was Pakistan which had hastily expelled the Indian envoy in Islamabad and scrapped all bilateral ties when the Centre had taken a stand on Kashmir and abrogated Article 370 granting the state ‘special status’ in 2019. Back then, Pakistan had reacted sharply to the Indian government’s move and had lost no opportunity to slam India at international forums citing that it was being unfair and rigid with the people of Jammu and Kashmir.

India had hit back saying that it was well and truly “an internal matter” of the country and it would not tolerate interference of any kind from either Pakistan or any other nation. India also reiterated that Jammu and Kashmir “was, is and shall forever” remain an integral part of the country.

“It’s a policy of no peace with Pakistan,” Alvi lamented. India has repeatedly said it seeks normal neighbourly relations with Pakistan in an environment free of terror, hostility and violence and has called out the neighbouring country for providing a safe haven for terrorists to operate from its soil.

Bilateral ties between India and Pakistan have often been strained over the Kashmir issue, cross-border terrorism proved to be emanating from Pakistan and the disputed territory of Pakistan occupied Kashmir (POK). But the relationship between the two countries touched an all-time low after 2019 and has not revived till date.

India’s decision to scrap ‘special status’ for the state of Jammu and Kashmir on 5 August, 2019 and the total shutdown of the internet in the Valley for months evoked strong reactions from Pakistan, which immediately downgraded diplomatic ties and expelled the Indian High Commissioner posted in Islamabad.

So, Alvi’s current remark is not only offensive for India but also factually incorrect since it was Pakistan which had stalled diplomatic engagement.

In his address, Alvi indicated that international diplomacy can be a major tool in trying to prevent conflicts and opposed the idea of giving veto powers to emerging nations. He urged the need to shun destructive security paradigms and doctrines in international relations, and said that the emerging world order should be based on rules, morality and ethics for making the world a better place for everyone.

Significantly, during the Covid-19 pandemic even though India offered a helping hand to almost all its neighbours by supplying life-saving vaccines and other humanitarian aid in the aftermath of the biggest health crisis that the world had seen, it was Pakistan which had given India’s ‘Vaccine Maitri’ initiative a wide berth.

Pakistan had also more recently not permitted initially use of its territory by Indian trucks when India had dispatched precious food grains and medicine for children in Taliban-occupied Afghanistan, which was reeling from a humanitarian crisis with acute shortage of food for its people.

Given that Pakistan too has not shown any initiative to herald peace and better neighbourly ties with India, President Arif Alvi’s accusation of India practicing a “no peace policy” is anything but convincing.