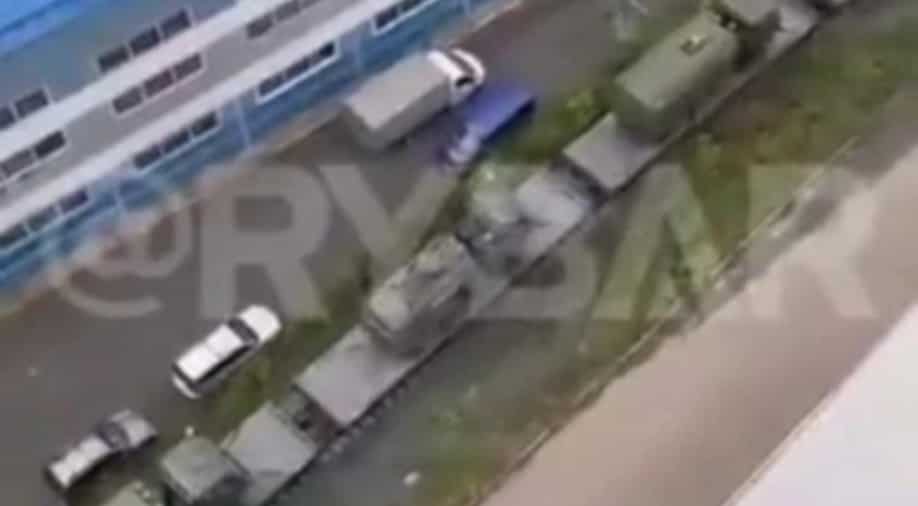 If some media reports are to be believed, Russia is transporting equipment for its nuclear weapons programme.

Multiple reports have claimed that President Vladimir Putin may be attempting to send a message to the West by conducting a nuclear test, amid the Ukraine war.

The footage of the convoy, shot at an undisclosed location in central Russia and carried by several Western news outlets shows a locomotive, linked to the 12th main directorate of the Russian ministry of defence carrying upgraded armoured personnel carriers and other equipment while heading towards the front line of the battlefield.

“This is actually a kit belonging to the 12th Main Directorate of the Russian MoD. The directorate is responsible for nuclear munitions, their storage, maintenance, transport, and issuance to units,” Konrad Muzyka, a defence analyst specialising in Ukraine was quoted as saying by The Telegraph.

As reported by WION, the North Atlantic Treaty Organization (NATO) has already warned its members that Putin may have deployed Poseidon, a nuclear weapon that is also known as the “weapon of the Apocalypse”.

NATO issued the warning note over the weekend which was leaked to Italian Media. As per the note, the doomsday weapon is on its way from its base in the Arctic circle to the Kara Sea.

Read more: NATO warns Russia may have deployed its ‘weapon of the Apocalypse’ Poseidon. Here’s all you need to know

According to data exchanged earlier this year under the New START arms reduction treaty between Moscow and Washington, Russia has 5,977 nuclear warheads for its strategic forces and the US has 5,428.

Each warhead is much more powerful than the bombs dropped by the US on two Japanese cities at the end of World War II, the only time atomic weapons were used.

We will use anything to protect Russia: Putin

The threat of Moscow using a nuclear bomb has grown exponentially ever since the Russian troops were forced to stand down as Ukraine quickly regained ground.

Putin raised the stakes further by mobilisation of reservists for the war, aiming to call up at least 300,000. But the effort is proving widely unpopular, with tens of thousands fleeing Russia and fueling protests and violence that threaten to destabilize the country.

Facing heat, Putin, in a televised speech said he was prepared to use any available means to defend his country, hinting at using the nuclear arsenal he has at his disposal.

“If the territorial integrity of our country is threatened, we will without doubt use all available means to protect Russia and our people – this is not a bluff,” Putin had said at the time.

Best of the World Cup so far: Top goal, save, player, team and more

Siddhant Chaturvedi to be a part of FIFA World Cup anthem...

News Next Desk - December 3, 2022 0
NEW DELHI: Bollywood actor Siddhant Chaturvedi is among the hottest Gen Z actors in the industry. The audience loves him for his great style...

News Next Desk - December 3, 2022 0
Week 14 of the college football season features a handful of highly anticipated matchups to end the year, starting with No....

News Next Desk - December 3, 2022 0
Fawad Khan starrer 'The Legend of Maula Jatt' continue to rake in big numbers at the box office. The film starring Mahira Khan has not...
%d bloggers like this: