Home World Explained: Fentanyl seized in 2022 enough to kill every American, says US... 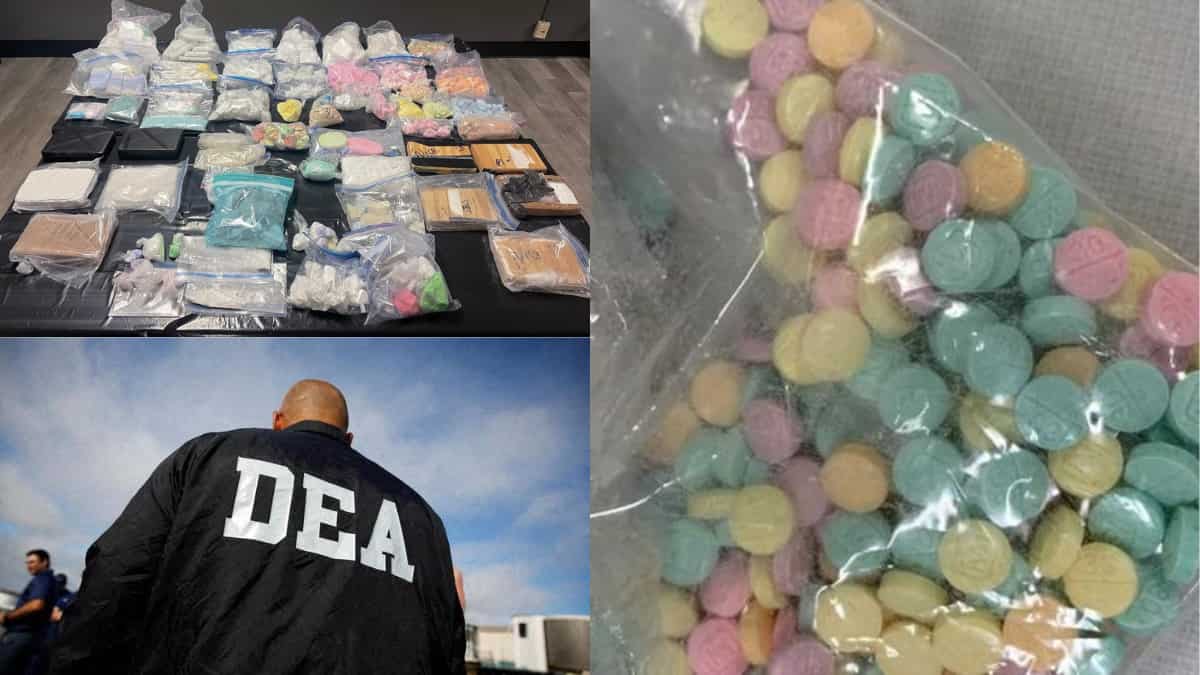 As the United States continues to struggle with an epidemic of drug overdose deaths, it might not be close to over. The country’s Drug Enforcement Administration (DEA), on Tuesday, said that this year they seized enough fentanyl in 2022 to kill every American.

This comes after a study found drug overdoses among people aged 10 to 18 more than doubled between 2019 and 2021, earlier this year. Reports suggest that recently the American markets have been flooded with fentanyl.

According to the US Centre for Disease Control and Prevention (CDC), fentanyl is a synthetic opioid which is up to 50 times stronger than heroin and 100 times stronger than morphine. It is also highly possible to get addicted to fentanyl. There are two types of fentanyl:

While both are considered synthetic opioids, this type of fentanyl was developed for pain management in patients with advanced-stage cancer and is typically administered by a patch or injection at hospitals. These are also prescribed by doctors to mitigate severe pain usually after surgery.

On the other hand, illicitly manufactured fentanyl (IMF) is found in the drug market in different forms including powder and liquid. As mentioned earlier, fentanyl is also diverted for abuse because of its powerful opioid properties and heroin-like effect. Furthermore, it is also usually mixed or added with other drugs, “because of its extreme potency, which makes drugs cheaper, more powerful, more addictive, and more dangerous,” said the CDC.

It is mixed with other illicit drugs like heroin, cocaine, and methamphetamine, and sold as other prescription opioids which is extremely dangerous since many people are unaware that their drugs are laced with fentanyl, which can also be disguised as highly potent heroin which often results in overdose-related deaths.

Fentanyl in its liquid form can be found in the form of nasal sprays, eye drops, and dropped onto paper or small candies, said the CDC.

Why is it used and how does it affect the body?

According to the DEA, fentanyl is used for, intense, short-term highs, temporary feelings of euphoria, slowed respiration and reduced blood pressure, nausea, fainting and seizures. It essentially affects the central nervous system and the brain to block pain signals to the rest of the body and also reduces anxiety and stress caused by the pain.

In a statement, on Tuesday (December 20) the US drug enforcement agency said that it had seized more than 379 million potentially deadly doses of fentanyl which included more than 50.6 million fentanyl-laced, fake prescription pills and more than 10,000 pounds of fentanyl powder in 2022.

“Fentanyl is the deadliest drug threat facing this country,” said the DEA, giving the example of just two milligrams of fentanyl being considered as a potentially deadly dose. “In the past year, the men and women of the DEA have relentlessly worked to seize over 379 million deadly doses of fentanyl from communities across the country,” said the US Administrator Anne Milgram.

The illicit drug is primarily manufactured in secret factories in Mexico, and trafficked by the Sinaloa and CJNG cartels to the US made from chemicals sourced from China, said the DEA. The US federal agency’s “top operational priority is to defeat the two Mexican drug cartels…that are primarily responsible for the fentanyl that is killing Americans today.”

In 2022, the DEA also seized more than double the number of fake prescription pills which were laced with fentanyl when compared to last year. This was in addition to the nearly 131,000 pounds of methamphetamine, more than 4,300 pounds of heroin, and over 444,000 pounds of cocaine, said the statement.

Last year, the agency also issued a Public Safety Alert after fentanyl-laced, fake prescription pills were “readily found on social media”. These pills are made to look identical to real prescription medications like Xanax, Percocet and OxyContin.

Earlier this month, a new study by the CDC said that drug overdoses among people aged 10 to 18 more than doubled in the US between 2019 and 2021. Additionally, the average monthly rate of overdose among adolescents also increased by 109 per cent. This health agency had largely attributed this to the illegally manufactured fentanyl which increased by 182 per cent in the same time duration.

Even small doses of fentanyl can be deadly and it is also “the most common drug involved in overdose deaths”, said the CDC. It added, over 150 people die every day from overdoses related to synthetic opioids like fentanyl. Furthermore, finding out if fentanyl is present in prescription drugs is “nearly impossible”, since it is not visible or has any distinct taste or smell.

However, there are test strips that one might use to check the presence of the illicit drug which typically show the result in five minutes but do not detect more potent fentanyl-like drugs, like carfentanil.

Echoing a similar warning as the DEA, the CDC in its report had said, “The proliferation of counterfeit pills is particularly concerning for adolescents given marketing aimed toward this population and the availability of such pills via social media.”

So far, many states have passed policies and Good Samaritan laws which protect those who overdose on opioids and the people who seek medical help for those individuals. While these laws differ from state to state, they also provide some protection against prosecution for possessing illegal drugs.

Aside from the test strips, the CDC also recommends administering Narcan which consists of an active drug called naloxone, a life-saving medication which is a nasal spray used to treat an opioid overdose and is available in all 50 states and can be without a prescription in most states. However, it is not a substitute for medical treatment.

Potential “fentanyl vaccine” on the horizon?

Earlier this year, a research team led by the University of Houston, Texas, said that they have developed a vaccine which targets fentanyl and could block its ability to enter the brain and eliminate the “high” which is often achieved by using these drugs. The breakthrough could have major implications for the opioid epidemic in the country and also act as a “relapse prevention agent” for people who are trying to quit, said the researchers in a statement.

The findings were first published in the journal Pharmaceuticals, in late October. Researchers also note that while Opioid Use Disorder (OUD) is treatable, at least 80 per cent of people once dependent on the drug, relapse. “We believe these findings could have a significant impact on a very serious problem plaguing society for years – opioid misuse,” said the study’s lead author Colin Haile and a founding member of the UH Drug Discovery Institute.

He added, “Our vaccine is able to generate anti-fentanyl antibodies that bind to the consumed fentanyl and prevent it from entering the brain, allowing it to be eliminated out of the body via the kidneys. Thus, the individual will not feel the euphoric effects and can ‘get back on the wagon’ to sobriety.”

So far, the vaccine has been tested on immunized rats and did not have any adverse effects while the team reportedly plans to begin human trials in the upcoming months. Additionally, since the “anti-fentanyl antibodies” are specific to fentanyl and its derivatives the vaccine does not react with other opioids like morphine, which means that a vaccinated person can still use opioids for pain relief, said the researchers.