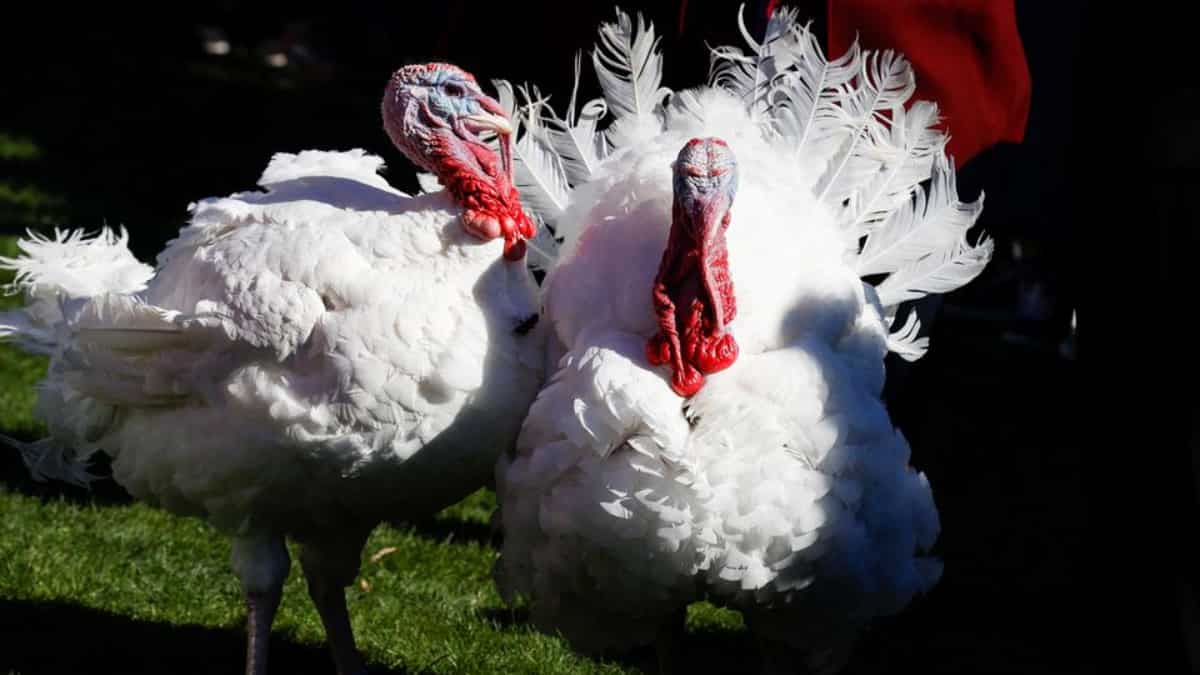 Ahead of Thanksgiving, the incumbent United States President Joe Biden continued the White House tradition and “pardoned” two turkeys named “Chocolate” and “Chip” on the South Lawn, earlier this week. The long and somewhat sporadic tradition has garnered a lot of attention in recent years, because well it is a turkey (in this case two turkeys) getting a presidential pardon from being someone’s Thanksgiving dinner and living the rest of its days elsewhere.

The long and complicated history

Each Thanksgiving the sitting US president pardons a turkey saving it from becoming a part of someone’s meal since the bird is a traditional food for the celebratory dinner. As mentioned earlier, the tradition has been sporadic and while it may have started in 1947 during Ronald Reagan’s administration it was not cemented until George Bush’s presidency in 1989.

Reports of Americans sending the country’s president a turkey for the holidays date back to the 19th century. While there are rumours of former President Abraham Lincoln being the first one to pardon a turkey after the first family was sent a live turkey for their Christmas meal and his young son asked him to spare the bird. At the time his son had argued that the turkey had the right to live as anyone and the former president granted the bird a “reprieve”.

During the Ulysses Grant presidency, in 1873, a poultry dealer from Rhode Island named Horace Vose became responsible for selecting the president’s Thanksgiving dinner turkey, a tradition which was carried out for two decades, before he passed away.

In 1947, the National Turkey Federation took over the role of becoming the official turkey supplier to the first family and former President Harry Truman was the first one to accept it in a formal turkey presentation ceremony, but in this case, the bird was not spared. It was actually former president John F Kennedy who sent the turkey presented away to a nearby farm in Washington and said, “Let’s keep him going” while a Washington Post report used the word “pardon” as well as “reprieve” for it, in 1973.

In the following years, two first ladies Patricia Nixon (1973) and Rosalynn Carter (1978) sent the turkeys they received to the Oxon Hill Children’s Farm and Evans Farm Inn to live in a mini zoo, respectively. In 1981, it had sort of become a norm to send the turkey to a nearby farm in Washington during Reagan’s presidency but no formal pardon was given.

It was former president Bush in 1989 to offer a presidential pardon to a turkey after animal rights groups were picketing outside the White House during the presentation of the bird and he quipped, “Let me assure you, and this fine tom turkey, that he will not end up on anyone’s dinner table, not this guy…he’s granted a Presidential pardon as of right now.”

Since then granting the presidential pardon has become somewhat satirical. Notably, the first turkeys which were pardoned were sent to the unfortunately named Frying Pan Park in Herndon, Virginia.

This year as Biden granted clemency to the two turkeys and said that he would keep his remarks short “Nobody likes it when their turkey gets cold”. This was also followed by a shot at the Republican Party and election deniers, “The votes are in. They’ve been counted and verified. There’s no ballot stuffing. There’s no foul play,” he said, referring to the process of how the two turkeys are selected by an online poll.

He added, “The only red wave this season is going to be if German Shepard Commander knocks over the cranberry sauce on our table,” in the context of a “red wave” which was expected by the GOP in the midterm elections.

In 2019, former President Donald Trump amid his ongoing impeachment trial during the turkey pardon said he has “already received subpoenas to appear in Adam Schiff’s basement.” While former president Barack Obama capped his final turkey pardoning by changing his signature from “Yes we can ” to “Yes, we cran” among several other dad jokes made in that speech in 2016.

Where do the turkeys go after being pardoned?

Over the years the turkeys have been sent to universities, farms and even parades. In 2022, for example, Chocolate and Chip were sent off to retirement at the North Carolina State University in Raleigh, North Carolina following their appearance at the White House. While previously the birds were sent to Virginia Tech’s Gobblers Rest exhibit in Blacksburg and during the Bush and Obama administrations the turkeys even spent a day at Disneyland to greet the park goers.

News Next Desk - December 3, 2022 0
Inspired to try boxing?Find out how to get into boxing with our special guide.
%d bloggers like this: