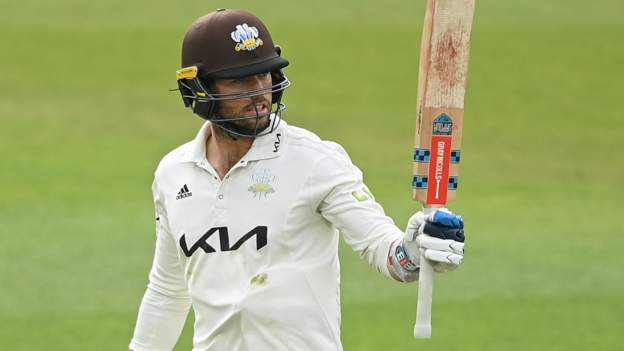 England pair Ben Foakes and Ollie Pope led Surrey’s fightback after a career-best 150 not out by Tom Abell for Somerset on day two at The Oval.

The visitors added 54 to their overnight 283-6 before skipper Abell finally ran out of partners.

Surrey lost early wickets, but Foakes and Pope put on 80 before the latter fell for 47 to a quite brilliant boundary catch by Tom Banton.

Having failed to earn any batting points in their first two matches, Somerset claimed a third when they passed 300 for the loss of Josh Davey, who was caught at third slip off Jordan Clark (3-66) after adding 59 with Abell.

But their last three wickets went down for 12 runs with Abell, who made his previous best of 135 six years ago, facing 298 balls in his unbeaten innings, hitting 22 fours.

Surrey were 48-3 in reply, with Rory Burns among the batsmen dismissed, caught behind for 12 from a fine delivery by Craig Overton, who took 13 wickets in Somerset’s defeat by Essex last week.

But Pope again looked in good touch before Overton picked up his second wicket when Banton dived full length on the boundary to take a one-handed catch from a top edge.

Foakes had been dropped on two by Banton off Davey and made the most of his escape by reaching a half-century from 113 balls.

He departed when he edged Peter Siddle – playing his 200th first-class game – to second slip, but Sam Curran was 44 not out at the close.

News Next Desk - October 4, 2022 0
New Delhi: Hrithik Roshan and Saif Ali Khan starrer Vikram Vedha is finally released in the theatres and is garnering a lot of love...
%d bloggers like this: