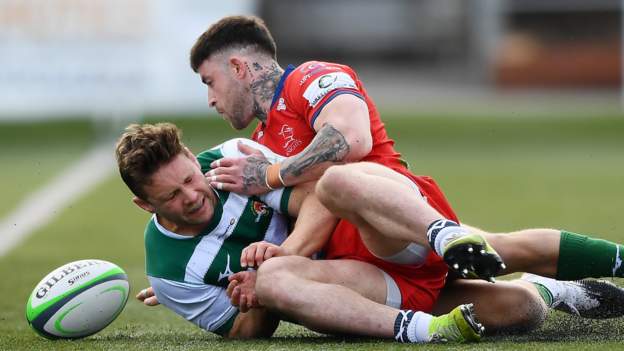 Championship winners Ealing Trailfinders have withdrawn their appeal against the decision to deny them promotion to the Premiership.

Ealing and Doncaster Knights were the only two clubs to apply for promotion, in the event they won the division.

But an audit found neither club “met the minimum standards criteria based on capacity (among other factors)”.

Premiership stadiums must hold at least 10,001, with Ealing’s ground only holding about half of that.

“We are disappointed that having won the Championship, we will not be taking our rightful place in the Premiership,” Ealing said.

“In Ealing Trailfinders’ view, the number of spectators for promoted clubs must be grown sustainably and over time so that promoted sides or those with ambitions for promotion are not forced either into speculative, rapid, unsustainable and unnecessary spending on unused stands or facilities.”

The Rugby Football Union said it will “review standards relating to minimum capacity” before next season’s audit process.

Doncaster also had their request to join the Premiership turned down though they ultimately finished second in the Championship this season, three points behind Ealing.

The decision has ring-fenced the Premiership as a 13-team competition next season, though if either team had been promoted it would have expanded to 14 clubs for 2022-23.