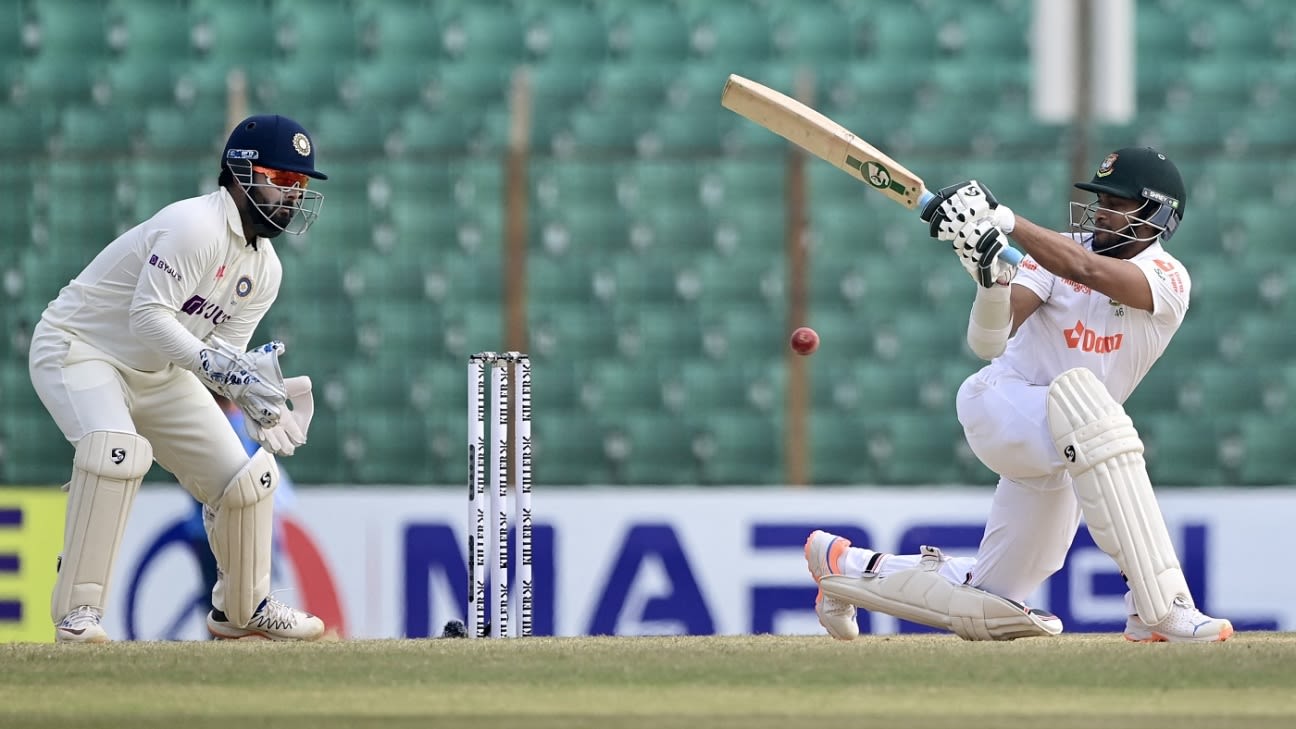 Shakib Al Hasan is likely to play the Dhaka Test as a pure batter after he was unable to bowl post the first day in Chattogram. Head coach Russell Domingo said that they would have difficulty in balancing the side if that was the case, but would be happy having Shakib as batter and captain as they try to level the series.

“He could play as a batter [only],” Domingo said after Bangladesh lost the first Test. “Obviously he didn’t bowl enough overs. He is still struggling with his shoulder and [ribcage] bruising. It left us with four bowlers – a big blow for us.

“Ebadot [Hossain] broke down [too], so we were stuck with three bowlers. It is very difficult to balance the side at the moment. I am not 100% sure if Shakib would be able to bowl. He is definitely available to play as a batter, which is an issue for us. We need an allrounder.”

Shakib made 84 in the second innings in Chattogram, getting out trying to slog Kuldeep Yadav as he looked for quick runs even as Bangladesh kept losing wickets at the other end on the fifth morning. The hosts eventually lost the match by 188 runs but Shakib’s batting was one of the few bright spots in the game.

Domingo said that Shakib has shown that despite his “laidback” demeanour, he is hungry to perform in Tests. The topic came up for discussion after Shakib was not seen on the field for certain periods during India’s first innings, but Domingo believes Shakib wants to continue to play Tests.

“It is a tricky question. It is a good question,” he said. “He comes across as very laidback, but when he is in the contest, he has pride in performance. Looking from the outside, you may think, ‘Does he really care?’. But I know that he has a lot of pride in performances. He doesn’t want to be embarrassed out there. He is competing 100%.”

Bangladesh have brought on left-arm spinner Nasum Ahmed as cover for Shakib, who is unlikely to bowl in the second Test. But Shakib’s fitness aside, they have other worries too – specifically with the bat. They were folded for 150 after India posted 404 in the first innings, before performing much better with the bat on the fourth day. However, late wickets meant survival would be difficult while chasing an improbable 513.

Russell on debutant Zakir Hasan: “It was a no-brainer to pick him due to his confidence and form”•AFP/Getty Images

Domingo said that their top order “isn’t confident”, but the inclusion of Zakir Hasan was a timely one, as he brought recent runs from domestic and A cricket.

“We wanted to compete. India is a good side, but once again, one bad session with the bat destroyed our chance in the match,” Domingo said. “Four-hundred is a good score, but it is manageable in Chittagong. We shouldn’t have been bowled out for 150 in the first innings. The most disappointing thing is the poor decision making from the batters.

“There’s a lack of confidence in the top order. They are not managing to find a way to get out of the slump. There’s a whole host of players in the top five or six that haven’t played well or been as consistent as I had hoped. The young player who hasn’t played Tests with us is confident at the moment. He has shown us how to do it. He played really well.”

Domingo was particularly disappointed at the timing of Litton Das’ dismissal on the fourth evening. He had built a nice defensive approach but six minutes before the tea break, dinked one straight to mid-on, playing what seemed like a half-hearted loft of Kuldeep.

“He lacks confidence, and is under constant scrutiny and pressure. He is trying too hard, listening to a lot of opinions, and trying a lot of things”

Domingo on why Mominul Haque was dropped

“I was disappointed with Litton’s dismissal, particularly the timing of it,” he said. “He is such a good player, so I am sure he’d be disappointed with it too. I can’t see Virat, Root, Smith or Marnus giving their wicket away in that sort of mode six minutes before tea. Litton is that good for us.”

Domingo also explained that Mahmudul Hasan Joy and Mominul Haque were dropped due to lack of form.

“It is based on the fact that domestically and for the A side, [Joy] hasn’t really got a lot of runs off late,” he said. “He hasn’t played international cricket for five to six months. It was a no-brainer to pick Zakir due to his confidence and form. That’s why Joy missed out.

“Mominul got 10 of his 11 hundreds at this venue. He’d be the first to admit that in the last year, he hasn’t got the runs. But he is too good a player to not have around. You cannot lose a player of Mominul’s quality. He will definitely be considered for the second Test.

“Mominul lacks confidence. He is under constant scrutiny, [and] pressure. He probably is trying too hard, listening to a lot of opinions, [and] trying a lot of things. He needs to go back to find his own to get runs. Some of the best players in the world have gone through slumps.”

News Next Desk - January 31, 2023 0
In a call to safeguard women's right to safe and legal abortion, Poland's health minister Adam Niedzielski on Monday termed the struggle of a...
%d bloggers like this: