Home World Divided on Earth, united in space: The one place where the US... After spending the past year together at the International Space Station, an American astronaut and two Russian cosmonauts returned to a world where the two countries are at loggerheads over Ukraine 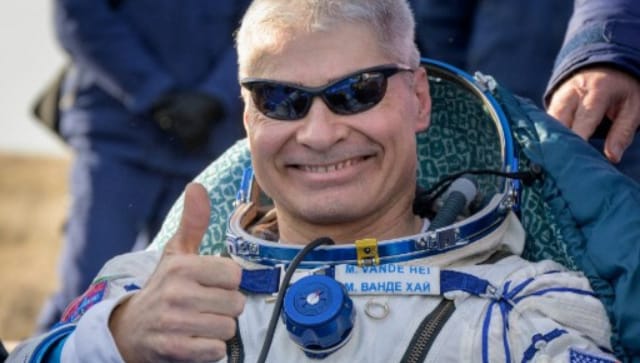 NASA astronaut Mark Vande Hei gestures after the landing of the Soyuz MS-19 space capsule in a remote area outside Dzhezkazgan (Zhezkazgan), Kazakhstan, on 30 March, 2022. AFP

After spending the past year together at the International Space Station, an American astronaut and two Russian cosmonauts returned to a world where the two countries are at loggerheads over Ukraine.

Despite escalating tensions between the US and Russia over Vladimir Putin’s war with Ukraine, NASA astronaut Mark Vande Hei caught a ride back to Earth on a Soyuz capsule with Russian Space Agency’s cosmonauts Anton Shkaplerov and Pyotr Dubrov.

The Soyuz capsule landed in Kazakhstan where a small NASA team of doctors and other staff was on hand for the touchdown and planned to return immediately to Houston with the 55-year-old astronaut.

While the three space travellers spent months aboard the International Space Station, geo-political equations had changed here on Earth as the US levied strict sanctions on Russia over its invasion of Ukraine.

Let’s see how the two countries kept it business as usual on the ISS, despite the escalating strife between them on ground:

As they landed in Kazakhstan, it was the first taste of gravity for Vande Hei and Dubrov since their Soyuz launch on 9 April last year.

Shkaplerov joined them at the orbiting lab in October, escorting a Russian film crew up for a brief stay. To accommodate that visit, Vande Hei and Dubrov doubled the length of their stay.

Before departing the space station, Shkaplerov embraced his fellow astronauts as “my space brothers and space sister.”

“People have problem on Earth. On orbit … we are one crew,” Shkaplerov said in a live NASA TV broadcast Tuesday. The space station is a symbol of “friendship and cooperation and … future of exploration of space.”

According to a report by The Guardian, long before Russia invaded Ukraine, Vande Hei had said that he was going to avoid the subject with his two Russian crewmates.

Despite getting along “fantastically … I’m not sure we really want to go there”, he said.

The ISS, however, wasn’t untouched by the ongoing armed conflict between Russia and Ukraine.

A day after Russia’s invasion of Ukraine on 24 February, Dmitry Rogozin, the director-general of Russia’s space agency, threatened the US of an “uncontrolled descent” of the ISS from orbit.

“If you block cooperation with us, then who is going to save the ISS from an uncontrolled descent from orbit and then falling onto the territory of the United States or Europe?” he said.

Also read: Ukraine crisis: How US-Russia tensions threaten the International Space Station and why India should be worried

According to a Reuters report, state-run Russian news agency RIA Novosti posted a video spoof the following week depicting cosmonauts waving farewell to Vande Hei before Russia’s ISS module detaches from the space station and flies away without him to the applause of Russian officials at mission control, leaving the rest of the station sinking lower in orbit.

Rogozin again lashed at the US by announcing that Russia would stop supplying or servicing Russian-made rocket engines used by two US aerospace NASA suppliers.

NASA, however, decided to brush off the provocative comments, saying it would continue to work with all its international partners, including Russia.

“He spouts off every now and then. But at the end of the day, he has worked with us.

“The other people that work in the Russian civilian space program, they’re professional. They don’t miss a beat with us, American astronauts and American mission control,” Nelson said.

Russia-America cooperation continues on board ISS

Despite the differences on the ground, three Russians who arrived two weeks ago and three Americans and one German, who have been aboard since November, still remain on board the ISS.

Their replacements are due in three weeks via SpaceX. Next week, SpaceX will fly three rich businessmen and their ex-astronaut escort to the station for a weeklong visit arranged by the private Axiom Space.

NASA’s shuttle programme ended nine years ago and it has been using Russian flights to reach the ISS. The US had to shell out tens of millions of dollars per Soyuz seat, until Elon Musk’s SpaceX began transporting NASA astronauts to the station in 2020.