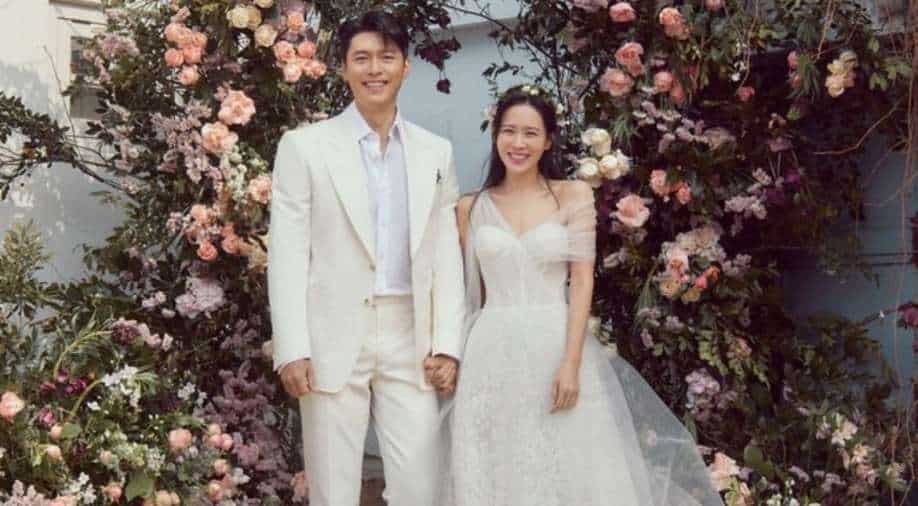 Popular Korean actors Son Ye-Jin and Hyun Bin are now married! The ‘Crash Landing on You’ stars got married on Thursday in an intimate ceremony with limited guests, their respective management agencies confirmed.

The couple chose an intimate ceremony owing to the ongoing pandemic.

“Today, actor Hyun Bin and actor Son Ye Jin are getting married and taking the first step as a married couple,” VAST Entertainment which manages Hyun said in an Instagram post and shared Hyun and Son’s official wedding pictures.

In the photos, Son and Hyun held hands while posing in their white wedding outfits. Son wore a dreamy white dress and Hyun wore a white suit. They can be seen posing against a wall of roses.

Another photo shows the couple in different attire with Son laughing while holding her wedding bouquet and Hyun can be seen in a white jacket and black pants combo with a black bowtie.

The couple first confirmed their relationship in January 2021 and then announced their engagement in February this year via social media.

Son’s post was accompanied by a note that said, “I thought long and hard about how to share this story because it’s an important one. I found someone to spend the rest of my life with. Yes… it’s him. Boy meets girl, recognizes each other in the crowd, promises to build a future together… I couldn’t imagine!”

“It happened so naturally… But, isn’t that destiny? Just being with him, I feel warm and protected. Please help us celebrate the beginning of our future. And to my dearest fans, I have received unconditional love and for a long time now, I thought, there’s no way to repay it. Please know that I’m infinitely grateful and I also wish you all happiness!”

The actors had fans rooting for them to date in real life after they starred in ‘Crash Landing On You’.

Son and Hyun have also worked together in the 2018 action thriller film ‘The Negotiation’.